Yves here. Since the financial media is covering the continuing meltdown of the ruble intensely, we thought it would be helpful to add some information that seems to be missing from most reporting. This post by Jacques Sapir from the 14th (hat tip Michael Hudson) provides important detail on the importance of oil to the Russian economy (far less than typically depicted, although it is the biggest source of foreign exchange), the impact of the fall of the ruble and oil prices on the domestic budgets, and the odds of a Russian default. Note that Sapir is sanguine on the default front and does not see a rerun of 1998 in the offing, by virtue of of Russia having large foreign currency reserves. Note that Menzie Chinn of Econbrowser differs, and uses a chart from the Economist to make his point:

In addition, observers did not take into sufficient account the fact that much of Russian forex reserves are to varying degrees illiquid… 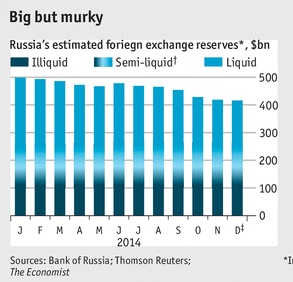 In other words, reserves useful for defending the currency against speculative attacks are more like $200 billion than $400 billion.

And it’s telling to see what a difference a few days makes. This article was penned before the failed Russian emergency rate hike to 17%.

By Jacques Sapir, director of studies at École des Hautes Études en Sciences Sociales in Paris, and head of the Centre d’Étude des Modes d’Industrialisation (CEMI-EHESS). He specializes in the economy of Russia, and teaches at the Moscow School of Economics. Originally published at RussEurope. Translation by Anne-Marie de Grazia

he sharp depreciation undergone by the Rouble during these past weeks relates to two main factors: a peak in the reimbursement of loans by Russian companies, but also the sharp drop in the price of oil. There is still a third factor to be included in the picture: speculation. It applies to the ruble and to the oil price as well.

It can be verified in the following table which carries the different values in the exchange rates since the beginning of the present year. One notices by the way that the exchange rate, after depreciating until mid-March, re-appreciated until July 2014 before undergoing a sharp depreciation during the Fall :

Evolution of exchange rates as an index.

One can see the extremely big fall between November 26 and December 4, followed by stabilization. Against all currencies, the Rouble appreciated slightly between December 4th and 9th. Also, the gap between the exchange rate against the dollar and the exchange rate against other currencies is considerable. This can be explained by the size of the repayments to which the Russian companies (banks as well as industrial companies) had to proceed during this period. They needed to buy dollars, which destabilized the currency market on which the dollar was getting rare because of the sanctions.

It seems that Russian companies and banks, faced with considerable loan payments to be made in December, have massively bought dollars, which made the Rouble go down during the first days of December. On a market where, as an effect of American sanctions, dollar liquidities are rare, this would explain the spectacular, yet not dramatic evolution of the past days. As far as the flux of reimbursements is concerned, it will decrease considerably come January 2015 (chart 1). 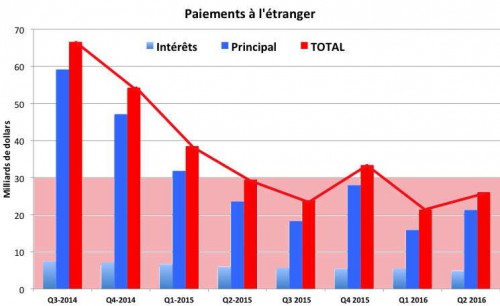 We must now examine the reason for the drop in oil prices.

A Drop of a Political Nature?

Multiple indications show this drop as being of a political nature. Some OPEC leaders have alluded to a possible speculation too. It is known that huge quantities of “paper-Oil” were in some Banks books and that these banks were going “short” on this trade. But, still, there is quite clearly a political bias in this speculation.

An attempt by the United States to destabilize Russia is often conjectured. Such an attempt may have occurred, but reality is much more complex. One must know that the threshold of profitability for the new sources of fossil fuels lies at 70 USD a barrel for oil sands (mostly exploited in Canada) and at 65 USD the barrel for shale oil. With an oil price that could hit below 60 USD a barrel, the OPEC countries are actually attacking the North American oil industry. Besides, it is significant that the large Russian oil companies, Rosneft, Loukoil, remain fairly silent about the present evolution of prices. One may well ask if there is not a tacit understanding between Saudi Arabia and Russia to evict, or at least to set limits to, a new actor on the fossil fuel market.

But this attack could have other consequences. The shale oil and gas sector has developed on loans covering 80% to 90% of the investment costs. These could make out over 300 billions in liabilities for American banks. These debts inevitably turn into “dubious loans” (or “non performing loans”) from the moment that one descends significantly below the threshold of profitability. But banks have, as a matter of course, securitized this loans, by emitting CDS’s in which these loans act as collateral. If we are stuck too long with a price that is too low, one cannot exclude a new financial crisis in the American banking system. We notice moreover that the potential risk hovering over the shale oil industry has already been anticipated in part, for operating licences in the United States have gone down 50% during the third quarter of 2014. We can therefore conclude that if oil prices maintain themselves at a very low level until next June, we will probably witness a blood bath in the shale oil industry, with very grave consequences for the banks. I point out in passing that the estimate of 65 USD as a threshold of profitability is an estimate given in oil industry circles, based on the technical conditions of extraction. It does not include financial costs. We can therefore expect the American government to blow the whistle to put an end to the price drop no later than the end of this winter, if it doesn’t want to have a major crisis on its hands. But extracted volumes will go down, too. Production in the United States, after experiencing a peak at the beginning of 2015, should go down significantly during the second semester of 2015. This means that we can expect a new rise in prices during the second semester of 2015, probably in the direction of 70-75 USD the barrel.

This poses no problem to Russia, whose reserves are such at present (450 billion dollars just for the Central Bank) that it can face an important drop in prices, albeit of a limited duration. One must note also that the repayment of loans by Russian companies for 2015 does not exceed 120 billion dollars. This remains far below the reserves of the Central Bank of Russia as well as of those of the finance ministry. Should it turn out to be necessary, these companies will find among the state actors the money which they need to repay their loans. But this would then imply an extension of the authority of the State over the economy. Yet, in no case should it lead to a “default,” as in 1998, neither of the State (which is very little in debt, and whose debts are essentially held by Russian actors, such as Sberbank) nor of the private sector, which is in fact in possession of vast assets in dollars and which is therefore solvent in the long term. The question of short term liquidity being manageable by way of an appeal to the public sector. The very idea of Russia getting struck into the same crisis pattern than in August 1998 sounds very, very strange. This is probably another case of ideology-driven statements, or ones made by people with no information at all on the actual situation of current Russia.

The image of a Russian default continues to haunt the minds, when the situation is actually quite different at present, as shown by the ample currency reserves. But one may ask if this default of 1998, in which American banks and European banks generally lost a lot of money, is not still being « reproached » to Russia. As a matter of fact, this default allowed Russia to save itself from the depressionist trap in which it had found itself since 1992. It was the founding act of the economic renewal, and of course also of the political renaissance, of the country. We remember the decision of the then Prime-Minister, Evguenny PRIMAKOV, to send Russian paratroopers to protect Serbian populations at the time of the intervention of NATO in Kosovo. One can see in this a first adumbration of the “return of Russia” which is at present embodied by Vladimir Putin, and which has still not been admitted by the ruling circles of the United States and their satellites in Europe.

Russia is not an Oil State.

These realities are systematically ignored by publicists which are popularizing an image of Russia as an « oil state. » In doing so, they forget the important fact that the sector of fossil fuels represents only 11% of GDP. Granted that it weighs more heavily in exports. But this translates in fact a variation of the relative price of oil products in relation to other goods, not a phenomenon of volume. A fairly simple example will show this.

Let’s take the case of a simplified export structure, distinguishing volumes and prices, and considering that at the beginning of the period (T) the level of these prices (calculated in USD) is equal to 100.

If we calculate the share of each category of goods in the total exports we obtain the following picture of the country’s exports:

For this price structure, commodities (which are considered here as representative of oil) play a decisive role in exports. Let’s now suppose that at T+1 the prices of commodities increase by 30% in relation to the base price, other prices remaining unchanged, and that at T+2, these prices diminish by 50% (always in relation to base price), other prices remaining unchanged. The product distribution of the exports of the country would then be as follows:

We see that the effects of relative prices can skew in a very considerable way the reality of the structure of an economy. It is particularly important to keep this in mind when one is reasoning about a country which, like Russia, is both a producer of commodities AND of industrial goods.

Back to the Ruble

We notice that the strong depreciation of the Rouble corresponds to a peak in repayments, but that the situation will loosen up in early 2015. It is sure therefore that the exchange rate will reverse its tendency in the first semester of 2015. The question is, up to what point? If the Rouble stabilizes around 50 roubles for 1 USD, inflation will be strong next year and could reach 12%. If we witness a rise in oil prices and the Rouble stabilizes around 40-42 roubles for 1 USD, the inflation rate could amount to merely 10%. Still, this implies that the Central Bank of Russia keep an eye on such establishments which could be tempted to speculate on the exchange rate, dragging it farther down than it should normally be. Explicit threats were made by President Putin at the occasion of his declaration of general policies before the chambers of parliament on December 4th. However spectacular it has been, the depreciation of the Rouble by no means puts into question the financial stability of Russia. The trade balance remains in excess, with an amount outstanding of 10 billion dollars a month. This is largely sufficient to face up to coming payments. The budget is actually profiting from this depreciation, which should allow the government to spend a little bit more in 2015.

Russia will therefore remain one of the least indebted countries in the world, which is not necessarily an advantage and goes to show that, provided it takes up debts internally, the country wields over a strong potential for investment and development.