We warned readers who are still keen to take the Syriza “Hope is coming” slogan as something more promising that a subconscious echo of the Obama 2008 “Hope and change” campaign, that the memo that Greece signed with the Eurogroup last week did not represent a victory or a lessening of austerity. As we pointed out:

There is no way of putting a pretty face on this document. It represents a huge climbdown for Syriza. Despite loud promises otherwise, they’ve agreed to take bailout funds, and the top and the close of the memo confirm that the baillout framework is still operative (emphasis ours):

The Eurogroup notes, in the framework of the existing arrangement, the request from the Greek authorities for an extension of the Master Financial Assistance Facility Agreement (MFFA), which is underpinned by a set of commitments. The purpose of the extension is the successful completion of the review on the basis of the conditions in the current arrangement, making best use of the given flexibility which will be considered jointly with the Greek authorities and the institutions…

We remain committed to provide adequate support to Greece until it has regained full market access as long as it honours its commitments within the agreed framework.

Translation: Despite all the softening language, the Eurogroup and the Troika (or as docg calls them, the Eumenides), see the bailout framework, with all of the required structural reforms, as still operative. And keep in mind that those structural reforms, which included items like reforming (in Troika-speak, cutting) pensions and continuing with the privatizations are on unless Greece can persuade the Troika that the government can find the money to replace what they lose by rolling existing measures back. As Bloomberg reporter Erik Schatzker put it at the beginning of the week:

Austerity is here to stay. The question is how austerity is defined…Greece is still bound by the terms of the bailout….They still have to hack off one of their limbs. The situation before was that the ECB, the IMF, and the European Commission were telling the Greece which limb of their limbs they’d have to hack off. Now the Greek government gets to decide, is it going to be my right arm is it going to be my left leg? But at the end of the day, it pretty much amounts to the same thing

Tuesday’s events bore that reading out. Greece did win approval of a list of reforms that included a lot of its campaign promises, such as a “Guaranteed Basic Income scheme” and expanding temporary employment for the unemployed, as being adequate to serve as a basis for further negotiation with the aim of winning Troika and Eurogroup approval so that funds could be released to Greece. The government put some items in that indicate that it thinks it can fund some of its programs through reforms, such as:

Identify cost saving measures through a thorough spending review of every Ministry and rationalization of non-salary and non-pension expenditures which, at present, account for an astounding 56% of total public expenditure.

Some commentators were already skeptical of where the official compromise stood. For instance:

And Robert Peston of the BBC, one of the harshest mainstream critics of the Greek government, today compared Syriza to Tony Blair. Ouch.

And another troubling sign is that Varoufakis’ long list with proposals like reforming VAT in a way that “maximizes actual revenues without a negative impact on social justice” did not sit well the Greece’s money minders. While all of the members of the Troika waived the initial reforms through, the ECB and the IMF made clear that they expect Greece to hew closely to the existing structural reforms. Expect to see significant changes in the reform list before the triumverate will approve the release of funds.

Here is the operative section of the ECB’s letter. You can read between the lines that this amounts to giving Greece a barely passing grade: 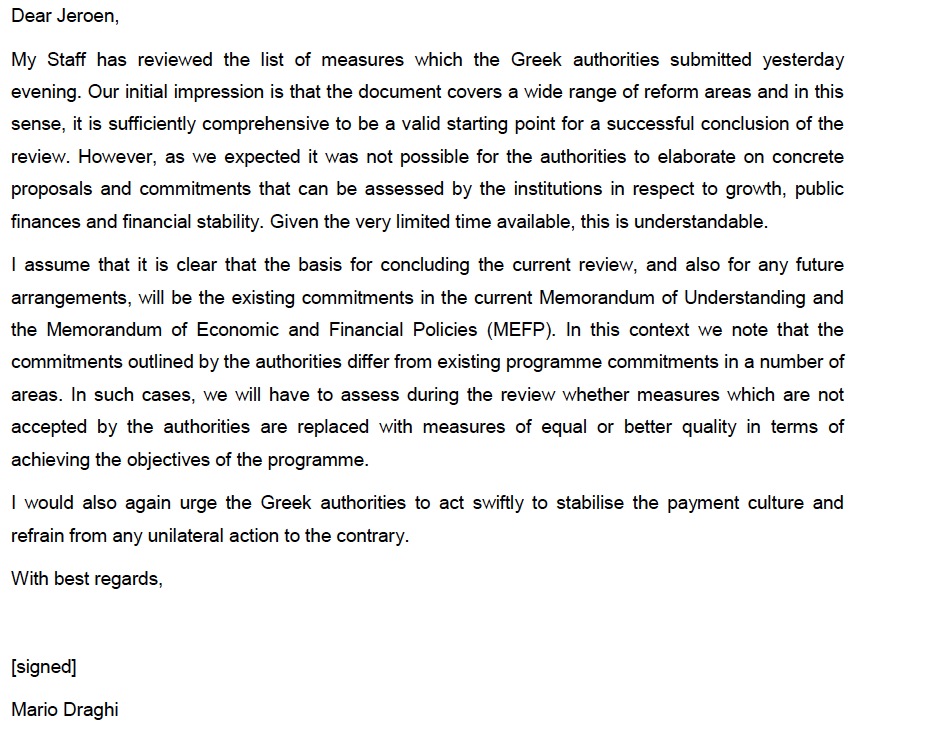 Translation: substitutions to the existing bailout structural reforms not permitted unless they produce similar or better outcomes, with “outcomes” measured in terms of budgetary impact.

The IMF was even more tart, or in the words of Chris Giles, “sniffy”. While the letter did note that the reform list wasn’t terribly specific, that was understandable given that the government was new in office, and approved of their commitment to tackling tax avoidance and corruption. But after that thin praise, it switched gears and took issue with its failure to show similar resolve as far as wearing the existing austerity hairshirt is concerned:

In quite a few areas, however, including perhaps the most important ones, the letter is not conveying clear assurances that the Government intends to undertake the reforms envisaged in the Memorandum on Economic and Financial Policies. We note in particular that there are neither clear commitments to design the envisaged comprehensive pension and VAT policy reforms, nor unequivocal undertakings to continue already-agreed policies for opening up closed sectors, for administrative reforms, for privatization, and for labor market reforms. As you know, we consider such commitments and undertakings to be critical for Greece’s ability to meet the basic objectives of its Fund-supported program, which is why these are the areas subject to most of the structural benchmarks agreed with the Fund.

This reads as even less accommodating than the not-exactly-warm-and-fuzzy ECB letter. Note in particular that the IMF is not keen about Greece deviating from the current privatization program, pension “reform,” and labor market reforms. These were areas where Syriza had promised rollbacks during its election campaign and reiterated the importance of canceling and/or redoing privatizations and implementing measures to strengthen labor bargaining power and improving wage levels. Varoufakis’ reforms contained measures of that sort, although his worker proposals were stepped down from the campaign platform.

“It forces Greece to be serious, and it forces the eurozone to say, ‘Look, we’re not going to give you any of this bridge financing unless you start working on implementation on day one,’” said Mr. [Jacpb] Kirkegaard [of the Peterson Institute].

But in a blow to the government, which faces a potential domestic backlash for bowing to eurozone conditions, both the IMF and the ECB reminded Athens they held a veto over providing further cash and could yet demand more concessions…

Tracked changes on documents submitted by Athens at midnight on Monday showed the Commission had worked closely with Mr Varoufakis in drafting the plans. Syriza’s proposals to overhaul its tax system and state revenue measures now closely resemble promises made by past Greek governments….

Troika officials will also demand much more detail on promises to carry out labour market reforms and commitments not to “roll back privatisations that have been completed”.

Conservative German MPs will also seek assurances on the measures when the Bundestag votes to extend the EU-IMF programme on Friday.

A second Wall Street Journal article explained why the IMF is not likely to relent:

In contrast to the eurozone, whose weaker members would face the immediate fallout of renewed market panic over Greece, the IMF represents 188 states around the world, many of which are already grumbling over the fund’s disproportionate support to a small European country.

It was the IMF—along with Germany—that in 2012 pushed through a restructuring of Greece’s privately held debt, against initial resistance from the European Commission and a majority of eurozone governments. And according to European and Greek officials, the IMF was also the main obstacle to disbursing the latest €7.2 billion disbursement of the country’s bailout last fall when the previous government was still in power.

One interlocutor suggested that things were not as dire for Greece as they appear, since the ECB is a bit trapped by not wanting to pull the plug on its support for Greek banks, since that would lead to a disorderly Grexit and a recognition of losses by the central bank. Since the Germans do not believe in allowing central banks to operate with negative capital (ie, “print” or monetize the losses), the Bundesbank would almost certainly insist on a taxpayer level to shore up the ECB’s capital, which would set off a political firestorm across the Eurozone. So the argument is that Greece holds stronger cards than it seems. But the ECB and the IMF have no incentive to release funds to the government. They can play the game of starving the Greek bureaucracy, and making it defer payments and fail to deliver on existing programs, which will gnaw away at Syriza’s credibility and support.

And do not forget that the German paper FAZ reported that the ECB board believes that Greece really wants a Grexit but does not want to look as if it is the precipitating party. If the ECB and the IMF believe that Varoufakis’ letter is more of the same, withholding funds might force the Greeks to take initial steps toward a Grexit, such as introducing quasi currencies like tax anticipation notes.

I’ve fallen prey in negotiations with far less at stake than the Greeks have of talking myself into deals I should not have gotten into because at each step I persuaded myself that the unfavorable terms were not as bad as they looked or I could make the long odds break in my favor. It’s far too easy to get caught up in the dynamic of the negotiations and lose sight of how terms you are fighting over translate, or more important, will be translated by the party with more power, into what you are expected to deliver. Maybe the Greeks will be lucky. Maybe the IMF and the ECB will blink. But the odds don’t favor those outcomes.