The oil-price plunge hit the industry when it was drunk on its own exuberance and awash in money. At the time, over-indebted junk-rated drillers had no trouble borrowing even more to drill more, efficiently or not. Dreadful IPOs flew off the shelf. Misbegotten spin-offs made Wall Street a ton of money. But in July, everything started to go awry. By October, it was clear that the oil-price plunge wasn’t a blip. By November, oil was in free fall.

Soaring production in the US, reaching 9.2 million barrels per day in January, and lackluster demand have caused US inventories to balloon. The “oil glut” was born.

So the industry adjusted by announcing waves of layoffs, whittling down operating costs, renegotiating prices with suppliers, and slashing capital expenditures. The number of rigs actively drilling for oil – a weekly gauge that indicates what’s going on in the oil field – has plummeted by 553 rigs, or 34%, since the peak in October. Never before has it plummeted this fast this far [The Fracking Bust Hits Home].

The crashing rig count was supposed to curtail production, and lower production would bring supply and demand into balance and allow the price of oil to recover. But the opposite is happening. And Devon Energy Corp. just told us why.

With total operating revenues of nearly $6 billion in the fourth quarter 2014, Devon isn’t the largest oil company out there, but it’s one of the larger players in the US shale revolution.

It reported Q4 results on Tuesday evening. According to its own measure of “core earnings,” it made $343 million. According to GAAP, it lost $408 million, after writing off “asset impairments” of $1.95 billion “related to the recent drop in oil prices.”

Stuff happens when the price of oil plunges.

But production soared – and will continue to soar. CEO John Richels explained the phenomenon in the press release:

We expect to sustain operational momentum in 2015 with the significant improvements we have seen in our completion designs and a capital program focused on development drilling. With strong results from our enhanced completions and a focus on core development areas, we expect growth in oil production to be between 20 and 25 percent in 2015, even with a projected reduction of approximately 20 percent in E&P capital spending compared to 2014.

And in Q4 2014, production of oil, gas, and natural gas liquids from Devon’s “retained assets” had soared to an average of 664,000 oil-equivalent barrels (Boe) per day. This included record oil production of 239,000 barrels per day, up 48% year over year. While bitumen production in Canada grew more slowly, oil production from fracking in the US soared 82%! 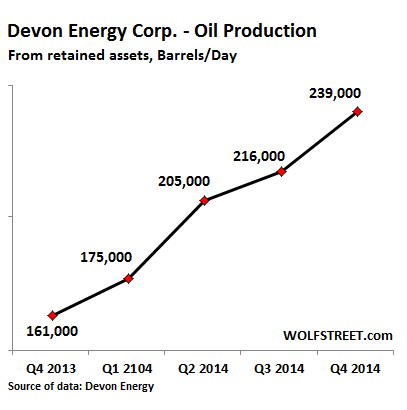 Oil production is projected to grow another 20% to 25% in 2015. This is how Devon explained the phenomenon:

The strong growth in U.S. oil production during the quarter was largely attributable to prolific well results from the company’s world-class Eagle Ford assets. Net production in the Eagle Ford averaged 98,000 Boe per day in the fourth quarter, a 100 percent increase compared to Devon’s first month of ownership in March 2014.

And in 2015, it expects a 50% increase in production from the Eagle Ford shale.

Oil – not natural gas. The price of natural gas has been a fiasco for years, and Devon has been moving away from it by selling assets and focusing its resources on oil-rich plays. Hence, natural gas production has actually edged down over the last three quarters even on a retained assets basis.

Devon will drill $1.1 billion in capital expenditures into the ground to achieve its oil production goals. It will use fewer rigs but accomplish more with them: its drill times, thanks to innovation, have improved by 47% over the last three years. And these rigs will be focused “almost exclusively” in DeWitt County, its most productive play in the Eagle Ford shale.

Other drillers are doing the same. Innovation, design improvements, efficiencies, and a relentless focus on the most productive plays will see to it that production continues to rise, despite the plunging rig count, despite the evaporating capital expenditures, despite the layoffs.

They will lose money. They have a lot of debt because the fracking boom was funded by debt. To stay alive, they must meet their interest costs. But if they slow down drilling, and production tapers off in line with the steep decline rates of fracked wells, their interest costs might eat up 50% or more of their shrinking operating profits, and the risk of default would soar – turning off the money-spigot entirely. Default might be next.

This is the brutal irony: drillers are hoping that rising production achieved with greater efficiencies allows them to meet their interest costs; but rising production pressures the price of oil to a level that may not be survivable long-term for many of them. They can lose money, burn through cash, and keep themselves above water through asset sales for only so long. And this is the terrible fracking treadmill they’ve all gotten on and now can’t get off.

In Canada, the floodgates opened in December. Perhaps it had something to do with oil, Canada’s number one export product, whose price plunge has triggered extensive bloodletting in the Canadian oil patch. Or perhaps foreign investors got spooked by something else. Read… Money Is Bailing Out of Canada