Yves here. Expect more of this sort of thing. As stresses within the Eurozone increase, the once unthinkable, that of a country leaving, is now increasingly regarded as plausible, particularly with France’s Marine Le Pen promising France’s departure should she win in 2017.

As the Eurozone crisis lingers on, debates on a potential demise of the single currency have been revived. Political parties advocating or contemplating an exit have not reached the same audience in every European country, but they are everywhere on the rise. A euro exit, which was once only contemplated for ‘periphery’ countries as a consequence of high financial distress, comes to be seen as a political choice worth debating in ‘core’ countries.

However, a crucial factor is often lacking in political and academic debates – the cost of the exit per se. What would be its short-term financial consequences? Exiting a monetary union does not bring a country immediately back to where it stood before entering – disentangling 15 years of financial integration entails substantial costs (Eichengreen 2007, 2010).

The conversion into the newly introduced national currency of private marketable debt securities issued by the companies of an ‘exiting’ Member State might be one of the trickiest problems. Indeed, if a domestic company earns its revenues in the new (devalued) currency while still having to repay its debts in euros, its financial situation may dramatically deteriorate. The argument has already been raised, but most proponents of a euro exit preferred to dodge the issue (Baldwin 2012). However, it has up until now remained mostly theoretical. What could be the magnitude of such an issue? We take France as an example.

We hold the governing law of euro-denominated debt securities to be the most predictive index of the extent of the redenomination. Naturally, contracts in foreign currencies (e.g. US dollars or pounds sterling) would be unaffected by the whole process. Regarding euro-denominated contracts, we assume that the ones under French law would be paid in the ‘new’ French franc (i.e. would be redenominated), while the ones under foreign law would still have to be paid in euros.[1]

We used a Bloomberg terminal in order to obtain the governing law of each debt security and to build a comprehensive database covering the marketable debt of the major French financial and non-financial corporations (Amiel and Hyppolite 2015). We considered the nationality of the ultimate parent company rather than the residence of the immediate issuer to determine the country of issue.

Notes: N/A means non-available (i.e. the information is not available on Bloomberg). Debt securities to be redenominated are securities in euros under French law (worst case scenario).

What about debt securities with ‘non-available’ (N/A) governing laws? A close study revealed that most of them were issued on foreign primary markets, leading us to assume them to be under foreign law.[2] Thus, the amount of debt securities unlikely to be redenominated would be close to 70%.

Things change when we look at firm-level balance sheets to precisely identify the main losers. Indeed, aggregate data tell us little about the risks of an exit. First, some companies – especially in the financial sector – are more strategic and systemic than others, and second, it is very dubious to bet on some forms of transfers from ‘winners’ to ‘losers’ of the euro exit. Overall, some specific cases are particularly worrying, such as some strategic non-financial corporations (SNCF, Orange, Carrefour, Unibail-Rodamco, and Numericable) and systemic banking groups (Société Générale, BPCE, and CIC-CM).

Drawing on these figures, we hold that the immediate financial cost of exiting the euro would be substantial if public authorities were to bail out the expected losses of exposed companies.[3]

Table 2. Costs of bailing out French companies in the event of euro exit 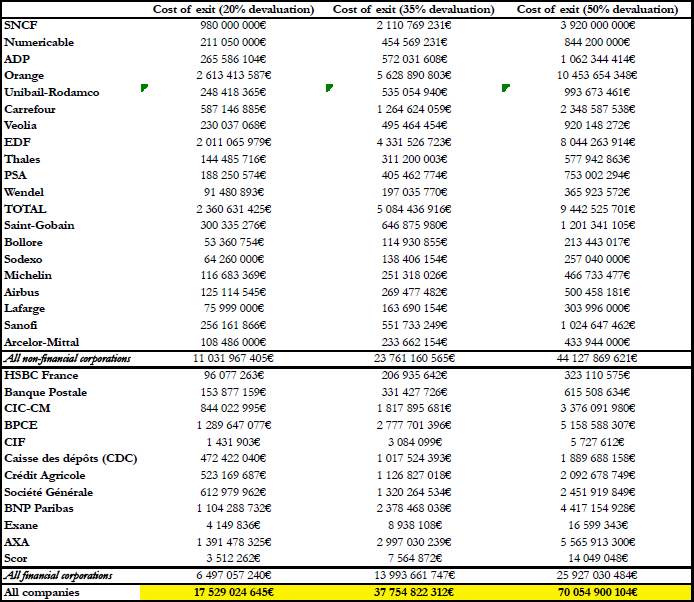 Is This Time Different?

At this point, it could be reasonable to cast some doubt on this argument. After all, some countries already succeeded in exiting a currency union without any financial turmoil. But in fact, historical examples support the idea that the ‘redenomination channel’ has always been crucial in explaining the successes or failures of exits from currency unions.

An often-quoted example of an orderly break-up of a currency union is the ‘Velvet Divorce’ between the Czechs and Slovaks in 1992–1993. Just as in the Eurozone, the financial systems (i.e. the banking sectors) of both countries were deeply intertwined, as a natural result of decades of political unity. Defining which debt should be paid back in which currency, after the Slovak crown had been devalued against the Czech crown, could pave the way for impossible legal challenges and many bankruptcies of unhedged Slovak debtors. The only reason why it did not happen is the existence of a massive financial support from Prague to Bratislava. Could one reasonably expect Germany to bail out an ‘exiting’ France?

On the contrary, Argentina provides us with a striking example of a country where the hazardous redenomination process in 2002 played an important role in the economic collapse. By the end of 2001, the vast majority of banks’ liabilities were written in US dollars, just as in France the bulk of private marketable debt is under foreign law or foreign currencies. When abandoning the ‘currency board’, the government chose to deal with it by converting dollar-denominated deposits in pesos at a rate of 1:1.4 and loans at a rate of 1:1. Roughly speaking, this almost amounted to a 40% devaluation of the banking sector’s assets. As detailed in our paper, this led the Argentine banks to the verge of collapse, virtually wiping out all their wealth. This impaired considerably the Argentine recovery – despite a massive devaluation that should have boosted exports, bank credit was almost zero and GDP collapsed by more than 10%.

In France, the fundamental problem lies in the excessive recourse to foreign-law private debt issues to be paid with domestic income streams. Neither French public authorities, nor French private actors ever considered the possibility of the euro’s demise – they acted in a perfectly integrated financial system which resulted in inadequate incentives to hedge against foreign-law exposures on euro-denominated debts.

What is to be done? Depending on the opinion one has on the future of the Eurozone and the autonomy of actions nation-states should retain, two opposite courses of actions could be chosen: ‘nationalisation’ or ‘Europeanisation’ of contracts.

First, to diminish the exposure of their firms to a euro break-up, France and other Member States could further develop their domestic bond markets – in the wake of the recent Paris Europlace initiatives in France for instance. Special emphasis should be given to reinforce French-law debt issuances in order to better monitor any mismatch that could arise in a Eurozone break-up scenario for companies excessively relying on foreign-law issues. In this context, French authorities should adopt a clear medium-term objective to reduce bond issues under foreign law, and greatly restrict foreign-law debt issues of state-owned companies or systemic banking groups.

But public authorities may face a dilemma. The measures previously mentioned would take years to be implemented by the usual mechanisms of incentives and soft regulation. In the long run, the question of euro exit might be less relevant, either because the current crisis will have been overcome, or because the single currency will no longer exist. Speeding up the process of French-law debt issuances might also trigger speculation on the future of the single currency, thereby causing the very financial crisis it was precisely designed to prevent.

Second, one could argue on the contrary that better legal and financial coordination between Member States of the Eurozone is necessary, for instance through the implementation of appropriate legal reforms enabling European firms to issue debt securities under a unified ‘EU governing law’. It would further reduce incentives to depart from the EMU, whose current institutional structure “facilitates a break-up” (Scott 1998), and thereby quash the risks of speculative attacks against a given country. Such a reform proposal could be put on the agenda of the ‘capital markets union’ (CMU) given that a ‘EU governing law’ might also make European capital markets more attractive to institutional investors – on top of being a first step towards future issuances of ‘stability bonds’ (Eurobonds).

However, this would mean a significant deepening of the Eurozone integration. European countries would once and for all bet on the success of the euro. If, indeed, the Eurozone turns out to be either politically or economically unsustainable, the consequences of an exit would be even direr than they are today.

[1] The interested reader should refer to the legal part of our study for more details (Amiel and Hyppolite 2015).

[2] Most debt securities with ‘non-available’ governing laws have been issued on foreign primary markets as reflected by their respective ISINs (International Securities Identification Numbers) on the Bloomberg terminal. And, as stated by the BIS, there exists a close relationship between foreign primary market issuance and foreign governing law (Quarterly Review, December 2012).

[3] We consider that a measure of the short-term financial cost of exiting the euro would be the amount of cash that public authorities should inject in exposed companies in order to keep their debt service coverage ratios constant.