“Progress” but no deal in ministerial-level Japan talks with U.S. on rice, autos [Japan Times]. Obama’s summit with Abe is April 28.

About the fast track bill [The Economist]

In an effort to reassure the sceptics, the bargain struck in Congress would make fast track conditional. If a long list of objectives, including some related to environmental and labour standards, is not met, then Congress will have the ability to “switch off” TPA and rewrite the agreement (in effect, killing it). The bill would also expand trade-adjustment assistance: a programme that provides aid to workers displaced by freer trade.

Assuming good faith, which is, of course, nuts. The “long list of objectives” sounds like a way to decoy discussion into horse-trading, back-scratching, and minutiae. Is not surrendering national sovreignty to ISDS courts one of the objectives? If not, deep six Fast Track.

“Fast Track requires the United States to approve the food safety systems of exporting countries even when domestic oversight is stronger (Sec. 2(b)(3)(A)(ii))” [Food and Water Watch]. “This forced ‘equivalence’ of foreign food safety systems can expose consumers to imported foodborne hazards and it is how the U.S. imported 2.5 million pounds of E. coli tainted ground beef from a Canadian plant that replaced most of its government safety inspectors with its own employees”

“Rep. Brad Sherman (D-CA) claimed in a conference call last week that TPP would actually give China special privileges. “This is a great deal for China because of the ‘rules of origin’ provision,” Sherman said. “Goods can be 65 percent made in China, then they can ship them to Vietnam, slap a ‘Made in Vietnam’ label on it and get them into this country duty-free. But because China’s not party to the agreement, we can’t get our goods in [to China]” [David Dayen, Salon].

Labor Secretary Perez interview: Watch him bob and weave on labor protections in TPP [WaPo; and The White House]. This interview is a steaming load of crap. If protecting labor were a priority for the administration, we’d have card check (remember that?). Not to mention a $15 an hour minimum wage. And (potential signatory) Vietnam outlaws labor unions. Does anybody really believe that will change, or that any administration will force that change? I mean, are the Republicans voting for TPP really going to be voting for what they believe is a global mandate for better wages and working conditions? Pull the other one. It’s got bells on.

More Democratic opposition [Plunderbund]. Unfortunately, since DCCC’s Steve Israel has thrown two cycles-worth of House elections, it’s Republican votes that count, and the Democrats get to be revolving heroes. What’s not to like?

“Here’s What You Need to Know About the Trade Deal Dividing the Left” [Mother Jones]. And that’s the problem with Mother Jones. Nobody on “the left” can possibly support TPP: “TPP elevates capitalization — the expectation of profit — as a principle to the level of, say, the Bill of Rights, or the Declaration of the Rights of Man” [NC].

[A]ny such legacy on trade will have been won almost entirely (a) via Republican support, (b) against the wishes of the majority of his own party, and by (c) totally alienating the activist base of the Democratic Party in the labour and environmental movements. If Hillary Clinton happens to lose her presidential bid next year, she will be able to quite validly blame the TPP for much of her loss, thanks to the damaged, divided state in which Barack Obama will have left the Democratic Party, in the course of pursuing his free trade agenda.

So there is a bright side! Say, I don’t recall Hillary saying anything about TPP recently. The Wyman-Hatch Fast-Track bill had to have been crafted to protect her, so why the silence?

Sanders to Clinton on TPP: “Are you on the side of working people who would suffer as a result of this disastrous trade agreement, and seeing their jobs go to China or Mexico, or are you on the side of corporate America? It’s not a very difficult choice” [KETV]. (Clinton: “I’m thinking it over!”)

Strategic hate management: “The New York Times, The Washington Post and Fox News have made exclusive agreements with a conservative author for early access to his opposition research on Hillary Clinton” [Politico]. That’s “eventheliberal New York Times.” Fixed it for ya.

Marianne Pernold Young, the woman who made Hillary cry in New Hampshire 2008 [Politico]. Her views are more nuanced than the headline:

[YOUNG:] I’d love for her to be there [in the White House]. She’ll be high energy. She’ll be very committed. She’s smart. Bottom line, I admire her, I champion her, and I wish her well, because she does represent us, as women.

She’s smiling more. She seems softer. She seems more approachable. … I’d like her to be my friend, whereas before I couldn’t have cared less.

[But she also said this:] She’s a true megalomaniac. Power hungry. To put up with her husband’s infidelities? She knew what she wanted, and she went after it.

See how excellent retail politics can be?

Clinton to hold five fund-raisers at the end of April [New York Times].

Jebbie’s going to outsource a lot of his campainging to his ginormous, dark money SuperPAC [WaPo].

Koch Brothers, on Scott Walker: When “the primaries are over and Scott Walker gets the nomination” [New York Times]. Explicitly not an endorsement.

Walker looking “sorta” good in Iowa [FiveThirtyEight]. Let’s all hope he can beat that felony rap by packing the Wisconsin Supreme Court!

Cruz: Obama an “unmitigated Socialist” [Bloomberg]. Yeah, Obama supports the dictatorship of the proletariat and all the rest of it. Sheesh, there’s red meat, and then there’s red meat. Moving Cruz to the Clown Car for this. He’ll never get beyond the base, and that’s not enough.

Lobby firm behind many SuperPACs accused of kickback scheme [The Intercept]. Film at 11. Kickbacks are the mother’s milk of politics.

Redbook, week of April 18, 2015:  The Easter shift throws off the numbers, which are likely to return to normal next report [Bloomberg].

OK, OK, I should have done it yesterday, but I am no longer as au courant with the culture of the bright young things of today as I was. So here we go.

Obama open to supporting medical marijuana [The Hill]. “There go my people, I must find out where they are going so I can lead them.”

“Rand Paul joined Democratic U.S. Sens. Cory Booker of New Jersey and Kirsten Gillibrand of New York last month in sponsoring legislation that would end the threat of federal prosecution for patients who use medical marijuana” [Herald-Leader]. Gee, that’s a real profile in courage, isn’t it? Paul’s supposed to be a libertarian, so why doesn’t he just outright advocate legalization? Because “he has to say that”?

The origin story as of 2009 [Ryan Grim, HuffPo]. Interestingly, “It starts with the [Grateful] Dead.”

“420 is the new everything” [Fresno Bee]. Well, I suppose when everybody can down tools for it, yes.

“[H]omes for sale within a one-mile radius of some cannabis clubs have a higher median asking price than others in the metro area” [Trulia].

The ultimate 420 snack guide [Tech Times]. Oddly, or not, the snacks are all “edible, food-like substances.” #1? Hostess Cupcakes!

“Men occupy the very top of the economy, and those who sit there are eager to marry from a smaller group of similarly successful and well-educated women. Men are also disproportionately at the bottom and here they are effectively unmarriageable” [Aeon].

“Gold’s traditional role as a store of wealth has been usurped by contemporary art and apartments in cities such as New York and London” [Bloomberg].

Readers, feel free to contact me with (a) links, and even better (b) sources I should curate regularly, and (c) to find out how to send me images of plants. Vegetables are fine! Fungi are deemed to be honorary plants! See the previous Water Cooler (with plant) here. And here’s today’s plant, the second of “I Wish It Were Spring!” week six (LS): 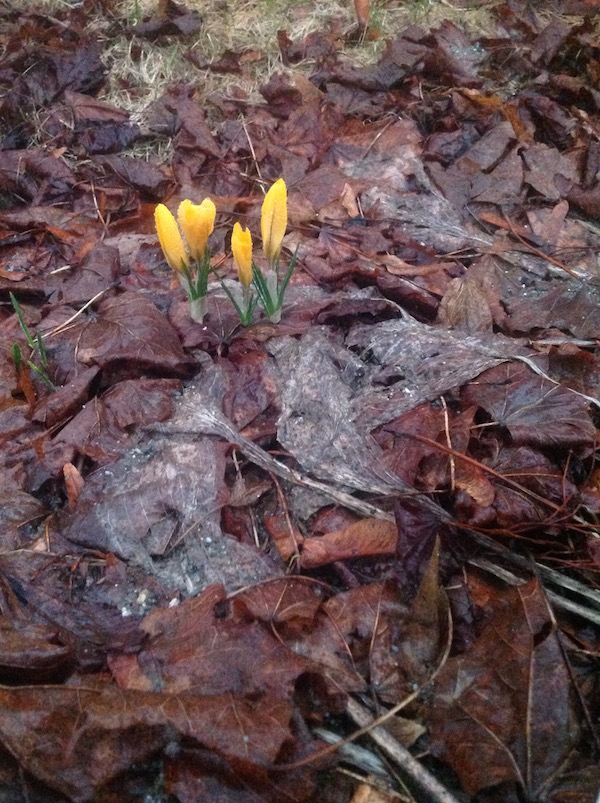 So this crocus shows you where I am; it’s literally the first one. So when I say “I Wish It Were Spring!” reader, I am not kidding. However, a correspondent from the Southeast informs me that Spring is almost over where they are, so perhaps I should switch themes. It’s almost time — up here in Zone 5b — so think about planting, so show me your plantings and garden projects!