Lambert: Sure! Paying back debt with money that’s worth more than the money you borrowed. What could go wrong?

Concerns about deflation – falling prices of goods and services – have loomed large in recent policy discussions (see e.g. Cochrane 2014, Muellbauer 2014, The Economist 2015). The debate is shaped by the deep-seated view that deflation, regardless of context, is an economic pathology that stands in the way of any sustainable and strong expansion.

However, the almost reflexive association between deflation and economic weakness is not so obvious. Seen as a symptom, deflation need not only arise from an aggregate demand shortfall, but also from greater supply, which would boost output. And seen as a cause, while it may be damaging – by pushing up real wages and unemployment, raising the real value of debt (debt deflation), or inducing consumers to delay spending – it may also be beneficial, by raising real incomes and wealth and making export goods more competitive. The cost of deflation is ultimately an empirical question.

Data limitations have so far made it difficult to answer these questions. In our recent paper (Borio et al. 2015), we take a step forward based on a newly constructed data set that spans more than 140 years, 1870-2013, and covers up to 38 economies. In particular, the data include information on equity and property (house) prices as well as debt, relying in part on Schularick and Taylor (2012) and, for house prices, Knoll et al. (2014). The results are quite revealing.

Price Deflations and Output Growth: Link or No Link?

We define deflation in the prices of goods and services simply as a fall in the corresponding price index (here, consumers prices is CPI). We further distinguish persistent from transitory price declines as the former should be expected to be more costly. We identify persistent deflations as periods in which prices remain below the previous peak for at least five years.1

Figure 1 provides a bird’s eye view of the deflation record. Deflations are not so rare; in our sample, countries have been in deflation some 18% of the time (years). And, as is well known, deflations were very common before World War II. The bulk of persistent deflations took place then, only four have occurred postwar (in Japan (twice), China and Hong Kong SAR). That said, transitory deflations have not been that rare even in the postwar era; there have been well over 100 deflation years in our sample.

Figure 1. Deflations: Not so rare 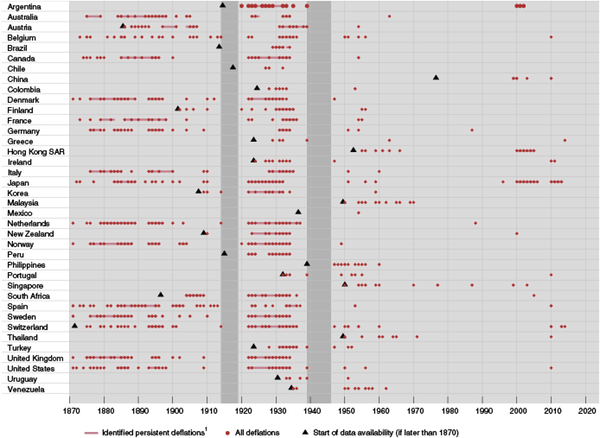 A preliminary assessment of the link between deflations and growth (measured in per capita terms) does not suggest a clear negative relationship. A comparison of all inflation and deflation years indicates that, on balance, inflation years have seen only somewhat higher growth (Table 1). The difference in average growth rates is highest and statistically significant only during the interwar years, particularly in the period 1929–38 that includes the Great Depression (some 4 percentage points), and much smaller at other times. It is the experience of the interwar years that influences the full sample results. Indeed, in the postwar era the growth rate has actually been higher during deflation years, at 3.2% versus 2.7%.

Likewise, focusing on the change in per capita growth in the wake of persistent deflations, we find only a weak link (Figure 2). While mean growth rates are mostly lower in the five years post-peak, the difference is large, 3.6 percentage points, and clearly statistically significant only in the interwar years, when the Great Depression took place – the subperiod that appears to drive also the results for the full sample. The difference during the classical gold standard period is 0.6 percentage points but it is not statistically significant. In fact, in the postwar era, average growth was even 0.3 percentage points higher in the five years after a price peak, although the difference is not statistically significant. Moreover, only in the interwar years did output actually fall post-peak. The benign output performance during the classical gold standard period is what has led previous researchers to characterise such deflations as ‘good’ (Bordo and Redish 2004, Atkeson and Kehoe 2004, Borio and Filardo 2004, Bordo and Filardo 2005). On this basis, the same could be said of the postwar deflations.

Notes: The numbers in the graph indicate five-year averages of post- and pre-price peak growth in real GDP per capita (in per cent) and the difference between the two periods (in percentage points); */**/*** denotes mean equality rejection with significance at the 10/5/1% level. In parenthesis is the number of peaks that are included in the calculations. The data included cover the peaks, with complete five-year trajectories not affected by observations from 1914–18 and 1939–45. For Spain, the Civil War observations are also excluded (1936–39).
1 Simple average of the series of CPI and real GDP per capita readings five years before and after each peak for each economy, rebased with the peaks equal to 100 (denoted as year 0). 2 As listed in Graph 1. 3 For the definition of a peak, see Graph 1.
Sources: Schularick and Taylor (2012); Global Financial Database; International Historical Statistics 1750–2010; The Maddison Project; national data; authors’ calculations.

Price vs Asset Price Deflations: Which Ones Are Costly?

To what extent does the weak association between deflation and growth change once we consider asset price deflations? If anything, it becomes weaker, and the evidence confirms the expected role of asset prices.

This is the case if we examine all years of increases/decreases in the CPI and asset prices in a simple multiple regression (not shown). This indicates again that a negative link between deflation and growth is only visible during the Great Depression and that, by contrast, output growth and asset price changes are significantly positively correlated over the full sample and most subsamples.2 The link is especially strong with house prices in the postwar period.

The results are actually starker if we consider persistent deflations. Here we examine the behaviour of output following peaks in the respective CPI and asset price indices (Figure 3).3 We find that the change in growth in the wake of persistent CPI deflations is uniformly statistically insignificant except for short horizons during the postwar era – where, however, deflation appears to usher in stronger output growth. By contrast, output growth always weakens in a statistically significant way following equity and property price peaks. Taken at face value, the output slowdown in the wake of both equity and property price peaks is sizeable. For example, in the full sample, the slowdown is quite similar for both sets of asset prices – cumulative growth is about 10 percentage points lower by the end of the five years.

Figure 3. Change in per capita output growth after price peaks1 (in percentage points2)

Notes: The estimated regressions are: , where y is the log level of per capita real GDP and  are, respectively, the CPI, property and equity price peaks. A circle indicates an insignificant coefficient, and a filled circle indicates that a coefficient is significant at least at the 10% level. Estimated effects are conditional on sample means (country fixed effects) and on the effects of the respective other price peaks (eg the estimated change in h-year cumulative growth after CPI peaks is conditional on the estimated change after property and equity price peaks).
1 The graph shows the estimated difference between h-year cumulative growth after and before the price peak. 2 The estimated regression coefficients are multiplied by 100 in order to obtain the effect in percentage points.
Source: Authors’ calculations.

What difference does the presence of high debt make to all this? In other words, is there evidence that high debt makes deflation more damaging – Fisher’s (1993) so-called ‘debt deflation’?

This is hard to find in the data, but a damaging interaction with house prices does emerge (not shown). Specifically, we test whether the change in growth after price peaks depends on the level of public and private debt at the peak. There is little evidence that this holds for CPI peaks. By contrast, the growth slowdown appears to be considerably larger when a measure of ‘excess’ private sector debt is interacted with property price declines.

Inevitably, our results come with significant caveats. The data set could be further improved. We have focused on only a few drivers of output costs. We have only a few episodes of persistent deflation in the postwar period. And present debt levels are at, or close to, historical highs in relation to GDP. This should caution against drawing sweeping conclusions or firm inferences about the future.

Even so, the analysis does suggest a number of considerations relevant for policy.

The episode was an outlier in terms of output losses; in addition, the scale of those losses may have had less to do with the fall in the price level per se than with other factors, including the sharp fall in asset prices and associated banking distress.

This can help to better identify the benefits and risks involved.

Borio, C and A Filardo (2004), “Looking back at the international deflation record”, North American Journal of Economics and Finance, vol 15(3), December, pp 287–311. Also available, in extended form, as “Back to the future? Assessing the deflation record”, BIS Working Papers, no 152, March 2004.

Goodhart, C and B Hofmann (2006): “Goods and asset price deflations”, in House prices and the macroeconomy, Oxford University Press, Chapter 5.

1 More specifically, we follow a three-step procedure similar to that used by Borio and Filardo (2004): (i) identify candidate peaks using a five-year moving average; (ii) date the local peak using the underlying series; and (iii) eliminate transitory deflations by requiring the peak to be higher than the price index level of the preceding and subsequent five years. The symmetrical restriction around the peak ensures that persistent deflation episodes do not overlap.

2 This is consistent with Goodhart and Hofmann (2006), who compare the impact of goods and services prices and equity prices on output growth for a subsample of our historical periods.

3 This is a local-linear projection-type regression in the spirit of Jordà et al. (2013).