Dave here. It’s interesting to read this education discussion of China’s monetary options amid rising debt and relate it to the position of the United States circa 2009. But we should also remember that the true state of China’s economy, and what they decide in terms of easing, will impact the U.S. economy through the trade channel far more than any Trans-Pacific Partnership.

By Alicia García-Herrera, a visiting scholar at Bruegel on sabatical from her position as Chief Economist for Emerging Markets at Banco Bilbao Vizcaya Argentaria (BBVA). She also serves as special advisor to the European Commission on China economic issues. Cross-posted from Bruegel.

As many other central banks in the Asian region, the People Bank of China (PBoC) has been on an easing mode for a few months now and more seems to be in the store. The once relatively polarized debate on what the PBoC monetary policy stance should be has increasingly leaned towards additional easing. Some analysts are even proposing full-fledged quantitative easing (QE), in the form of US Treasury sales to raise funds for assets locally, such as local government bonds and other hardly–performing assets. There is no doubt that the PBoC could, thereby, bring another big stimulus into the already heavily massaged Chinese economy as it would help debt-saddled local governments to clean their balance sheets and, at the same time, allow banks’ to lend further. As if this were not enough, any additional easing – capital controls permitting- would also push the RMB to a more depreciated level, bringing thereby an additional push to external demand.

Given China’s increasingly weak economic situation and growing deflationary pressures, the above could sound like music to Chinese ears. An obvious proof of how much euphoria this music can bring is the recent dramatic revival of Chinese and Hong Kong stocks. Some optimistic commentators have even related it to a strong economic recovery in the near future, notwithstanding the poor incoming data. Whether they are proven right or not, at least temporarily, very much depends on the PBoC and how much it ends up easing, especially if it goes all the way to some sort of QE.

Ironically enough, such monetary binge from a heavy-loaded easing by the PBoC can only harm the Chinese economy. The key reason is that it will continue to feed leverage by Chinese agents, by artificially lowering the cost of funding, at the worst of all times, namely that of a renewed reform push. The low shadow of the FED’s recent history, namely the complacent idea of a Great Moderation right before what has ended up being the US worst financial crisis in decades should constitute an important warning signal for the PBoC in its current deliberations.

China has already pushed reforms during other periods of financial fragility. The most recent of all occurred during the early 2000s, when the banking system was saddled with bad debts. However, there were a number of key factors that helped the Chinese authorities manage that situation without major consequences. First and foremost, China’s debt level was very moderate (Graph 1). Second, potential growth was much higher since China was enjoying an earlier stage of development and urbanization. Third, the economy was smaller and closer so the rippling effects on the rest of the world remained much more limited.

Today’s situation is not only more worrisome but also much harder to cushion. First of all, China’s overall debt level has more than tripled from its 2007 level and it is also very large when compared with other emerging markets in terms of its percentage to GDP (Graph 2). 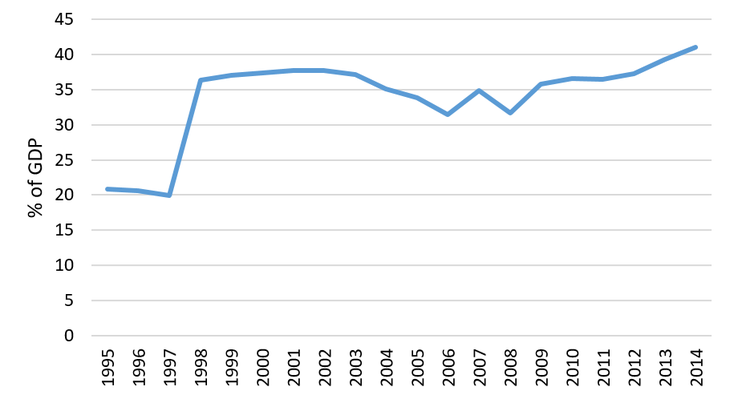 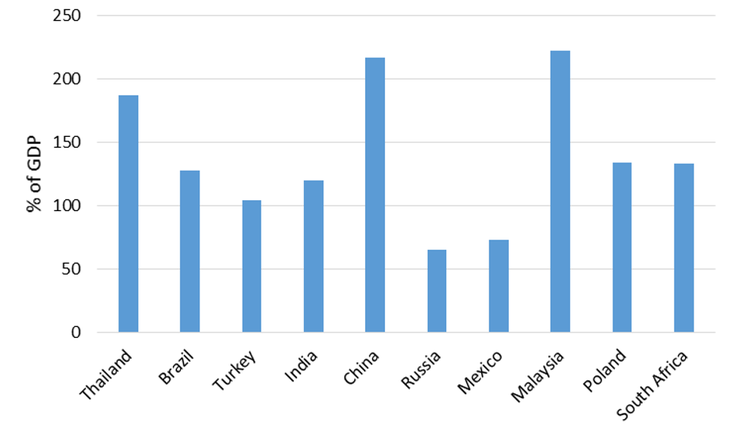 Note: Includes debt of households, non-financial corporations, and government. Q2 2014 data for advanced economies and China; 2013 data for other developing economies. Source: McKinsey Global Institute, ‘Debt and (not much) Deleveraging’.

Second, the global financial crisis and the related stimulus package is only part of the reason why debt has accumulated so quickly. In order words, there is not only a stock problem but a flow one as debt keeps piling up. Starting with public debt, over and above the massive increase after introducing the 2008-09 stimulus package, local government have continued to amass large deficits, which would make China’s consolidated fiscal accounts – if they existed officially – look awfully similar to those of the buttressed Southern Europe.

Third, the private sector, driven by corporations, has been levering up at an even faster speed. In fact, private debt is six times larger than in 2007, having reached 150% of GDP in 2014 (Graph 3). More worryingly, from virtually no exposure abroad, Chinese corporations and banks have borrowed massive amounts in USD, when the currency was cheap and rates were low, accumulating as much as 20% of GDP according to my estimates. Finally, and most importantly, China’s nominal growth has nearly halved from its peak levels. Therefore, the wonderful vanishing effect on high nominal growth on debt is no longer as effective. 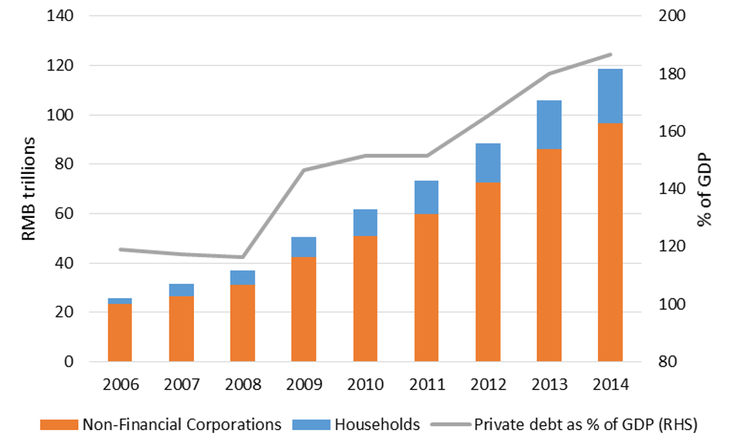 Notwithstanding the well-known cushions that the Chinese economy has (both in terms of international reserves but also of public assets which can be privatized), the speed and extent at which China’s has been leveraging have clearly had a toll on the economy. The clearest case is the real cost of funding, which has increased substantially lately at the same time in which China’s potential growth has been coming down. In fact, the safest asset, government bonds are already hovering 2% in real rates from negative territory in 2011. While this may still sound pretty low, we cannot forget that the Chinese economy has long been spoilt with a relatively low cost for capital, which is partly behind the excessive role of investment in China’s growth story. Furthermore, both local governments and corporations are facing a much higher funding cost than the central government. In fact, the floor for their funding cost, the benchmark lending rate, is already up to 4% in real terms (Graph 4). Furthermore, many local governments and corporations, particularly real estate developers, need to borrow in the shadow banking sector where the cost of money is much higher. I would argue that the high cost of funding– more than the still relatively moderate slow-down in the Chinese economy – is behind China’s push for a laxer monetary policy. The problem is that the cost of funding not only hinges on the monetary policy stance but also on the higher credit risk from a much more leveraged economy. Such higher credit risk cannot be eliminated by laxer monetary policy only, at least not structurally. It would also require the commitment from the Chinese government that no local governments and, possibly, corporations will be allowed to fail, at least not those large enough to be systemic. While the Chinese government has already been playing hide–and-seek as concerns its bail-out policy, it seems clear that a more bail-out prone attitude would clearly go against its market-friendly reform agenda. In addition, China’s fiscal room is no longer as ample so as to make an open-ended bailout policy credible, nor would it be advisable anyway.

Coming back to the role of monetary policy in reducing the cost of funding, there is no doubt that the PBoC has enough instruments at hand to bring it down; the question is at what cost. Given China’s much deteriorated fiscal finances and the corporations’ massive leverage, the PBoC’s additional easing would only add more fuel to the fire at a crucial time of reform. The importance of hard budget constraints during a reform process can hardly be overstated based on the experience of the Ex-Soviet Bloc as well as that of China at an earlier stage of its reform process in the 1990s. Given that China has been growing its market and, thereby, is corporations, many of which are now among the largest in the world, hard budget constraints are not only about fiscal policy but also about letting the market price corporations’ credit risk without excessive interference. In other words, while the PBoC should of course support the Chinese economy and avoid a hard landing, it should stop short from full artificially lowering the cost of funding beyond what would be required for a correct evaluation of credit risk. More specifically, the PBoC should ease monetary policy to the point that even unsound institutions can continue to operate without changing their behavior, especially as concerns leverage. This is the very fine line that the PBoC needs to draw. In addition, we cannot forget that the monetary policy stance also needs to take into account the fiscal stance, which has so far been extremely lax pushing the natural interest rate upwards. The very large local government deficits go against the notation of a hard budget constraint to reform the fiscal administration.

Therefore, not matter how attractive the music sounds to the PBoC’s ears, it should refrain from making it too easy for local governments and leveraged corporations to avoid being confronted with the need to restructure and, therefore, with the need to reform. Flooded with liquidity, neither SOEs nor local governments will feel the pinch, eliminating market forces. If this concern is generally true, it is even more so for doubtful projects– which is what a potential QE in China would end up supporting. All in all, too much easing from the PBoC– let alone full-fledged quantitative easing – can only foster financial fragilities. By that token, if financial stability become the key concern, China’s much needed reform process will need to be postponed once again to manage financial fragilities first.