Lambert here: Sadly, the authors cite “(Reinhart and Rogoff 2009),” but perhaps that’s just a ritual genuflection. However, the article puts the Industrial Revolution in a new light, and with the Opium Wars going on at more or less the same time, the Brits certainly were a busy lot!

Towering debts, rapidly rising taxes, constant and expensive wars, a debt burden surpassing 200% of GDP. What are the chances that a country with such characteristics would grow rapidly? Almost anyone would probably say ‘none’.

And yet, these are exactly the conditions under which the Industrial Revolution took place in Britain. Britain’s government debt went from 5% of GDP in 1700 to over 200% in 1820, it fought a war in one year out of three (most of them for little or no economic gain), and taxes increased rapidly but not enough to keep pace with the rise in spending.

Figure 1 shows how war drove up spending and led to massive debt accumulation – the shaded grey areas indicate wars, and they are responsible for almost all of the rise in debt. Over the same period, Britain moved a large part of its population out of agriculture and into industry and services – out of the countryside and into cities. Population grew rapidly, and industrial output surged (Crafts 1985). As a result, Britain became the first country to break free from the shackles of the Malthusian regime.

Figure 1. Debt accumulation and government expenditure in the UK, 1690-1860 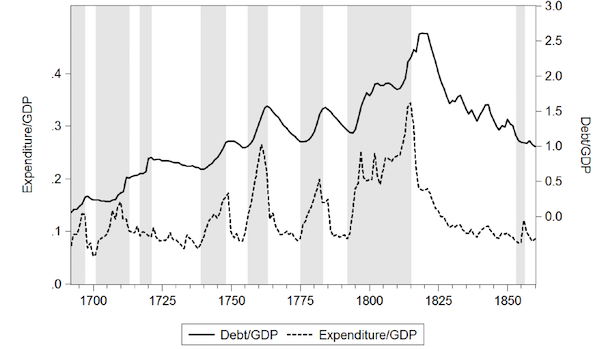 Until now, scholars mostly thought of the effect of government borrowing on growth as either neutral or negative. One prominent view held that investment in private industry would have been higher had Britain fought and borrowed less (Williamson 1984). Another argument is that private savings decisions undid the potentially negative effects of massive borrowing – because debt eventually has to be repaid, private agents anticipated rising taxes in the future and neutralised the effects of debt accumulation (Barro 1990).

The Revolution That Wasn’t

In a recent paper, we argue that Britain’s borrowing binge was actually good for growth (Ventura and Voth 2015). To understand why massive debt accumulation may have accelerated the Industrial Revolution, we first consider what should have happened in an economy where entrepreneurs suddenly start to exploit a new technology with high returns. Typically, we would expect capital to chase these investment opportunities – anyone with money should have tried to put their savings into new cotton factories, iron foundries and ceramics manufacturers. Where they didn’t have the expertise to invest directly, banks and stock companies should have recycled funds to direct savings to where returns where highest.

This is not what happened. Financial intermediation was woefully inadequate – it failed to send the money where it should have gone. As one prominent historian of the British Industrial Revolution argued:

“the reservoirs of savings were full enough, but conduits to connect them with the wheels of industry were few and meagre … surprisingly little of [Britain’s] wealth found its way into the new industrial enterprises ….” (Postan 1935).

There were many reasons for this, but deliberate financial repression by the government was one of them. Usury limits, the Bubble Act, the Six Partner Rule that limited the size of banks – all of them were designed to stifle private intermediation, in part so as to facilitate access to funds for the government (Temin and Voth 2013).

Without effective intermediation, new sectors had to self-finance – rates of return stayed high because so little fresh capital entered to chase the sky-high returns. Allen calculated that the profit rate for capital rose from 10% in the 1770s to over 20% by the 1830s – capital’s share of national income more than doubled (Allen 2009).

The inefficiency of private intermediation is crucial for debt to play a beneficial role. By issuing bonds on a massive scale, the government effectively pioneered a way – unintentionally – to put money in the pockets of entrepreneurs in the new sectors.

How did it do that? Before the availability of government debt, Britain’s rich and mighty – the nobility – overwhelmingly invested in land and land improvements. Status was closely tied to land, but improving it was not a profitable enterprise. Many forms of investment yielded a return of 2% of less. No wonder that noblemen were disenchanted with landed investment: By the 1750s, the first nobles were switching massively out of land and into government debt. The Prime Minister Sir Robert Peel advised: “every landowner ought to have as much property (as his estate) in consols or other securities…” (Habbakuk 1994). Many nobles obliged, shifting into an asset with a superior risk-return profile. As Lord Monson put it: “What an infernal bore is landed property. No certain income can be reckoned upon. I hope your future wife will have consols. . . ” (Thompson 1963).

The shift from investing in liming, marling, draining, and enclosure into government debt liberated resources – labour that could no longer be profitably employed in the countryside had to look for employment elsewhere. Because so much of English agricultural labour was provided by wage labourers, the switch to government debt pushed workers off the land. Unsurprisingly, wages failed to keep pace with output; real wages, adjusted for urban disamenities, probably fell over the period 1750-1830. What made life miserable for the workers, as eloquently described by Engels amongst others, was a boon to the capitalists. Their profit rates continued to rise as capital received an ever-larger share of the pie – while the share of national income going to labour and land contracted. Higher profits spelled more investment in new industries, and Britain’s industrial growth accelerated.

By putting debt at the centre of our interpretation of the Industrial Revolution, we can provide a unified explanation for a number of features that have so far seemed puzzling. Growth was relatively slow, especially in the beginning (Crafts 1985) – but technological change was probably quite rapid (Temin 1997). Government borrowing slowed capital formation on impact – but structural change was rapid over the period as a whole. Rates of return were high in industry, but little capital chased these returns. Wages failed to keep up with productivity despite the rapid move out of the countryside and into the cities. By emphasising how government debt issuance ‘healed’ the negative consequences of financial frictions, we can jointly explain rapid structural change and slow growth; rapid technological change and poor wage growth; massive government borrowing and the first take-off into sustained growth.

The issuance of government debt also accelerated social change – the rise of the capitalists and the decline of nobility. Without it, rates of profit in industry would have been less, and the decline and fall of the nobility as a dominant economic force would have taken much longer.

The solution that would have ensured the fastest growth – a much better financial system – would have preserved England’s social hierarchy entirely. Financial investment from the nobility would have flowed into new sectors via banks and the stock market, allowing the top 1% to earn high returns. The rise of the capitalists would have been long-delayed or been avoided altogether.

How much of the situation in industrialising England has any relevance for the world as it is now? Is this a tale from a distant island and period of which we know little – to paraphrase Chamberlain – or does it hold lessons for the present? Financial frictions are still very prominent even in the most developed countries today; changing the profitability of revolutionary sectors should have first-order effects on the long-run rate of growth. The issuance of government debt may still crowd out investment that is, overall, inefficient.

These efficiency-enhancing effects of government debt may be all the more important in developing countries. There, the added benefits of debt that we did not discuss – such as providing a safe store of value, and a certain source of liquidity (Holmstrom and Tirole 1998) – may tilt the overall scoresheet even more in favour of government borrowing. None of this is to say that debts may not become excessive (Reinhart and Rogoff 2009) – but when we consider the dangers of debt, we should keep an eye on its potential benefits as well.