Long before David Cornwell (aka John Le Carré) retreaded an insignificant career gathering facts at MI5 and MI6 into lucrative fiction about espionage, Eric Ambler created the genre from an insignificant career telling lies at an advertising agency. In the Le Carré business model, characters of several nationalities close to ourselves lie, double-cross, and moralize their heads off, but noone gets to keep the big money, except for Le Carré.

In his most artful work, The Intercom Conspiracy, Ambler told the story of two NATO-country officers devising the business of publishing secrets for the purpose of making a fortune from getting paid to stop. Ambler’s breakthrough was to realize the warfighting agencies of Washington, Brussels, London, and Moscow will pay bigger money for silence than for lies.

When it comes to today’s info-war against Russia — Greece too — Ambler’s business model ought to be more profitable than Le Carré’s. So why is all the American, NATO, university and foundation money being spent on see-through fabrications and B-grade liars? Answer – in war, truth has no operational value unless it’s secret; and no asset valuation until the war’s over and the truth-tellers have won. If you lose the war, as Greeks are now discovering, the truth has no market value. You are too poor to pay for it.

In The Intercom Conspiracy a newsletter is issued weekly by an American with a retired general’s star; he’s a cross between Philip Breedlove, the current NATO commander, and Anne Applebaum, wife of a no longer current Polish politician: vain, unfunny, balmy. After eating too much dinner, the general drops dead. His publication is then bought by two serving NATO officers, colonels from the intelligence branches of their armies. One is too subtle to be Dutch; the other too short to be Swedish. They are neither as eccentric as Englishmen, nor as obedient as Germans. To be precise, they are cool risk and profit calculators like the Geneva resident, Ambler himself. 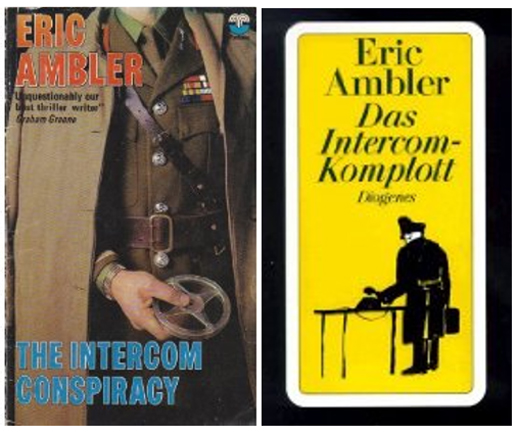 For a copy: http://www.amazon.co.uk

Code-named SESAME, the disclosures, which the two plotters feed to the Intercom newsletter, start with test results for a new NATO fighter aircraft revealing it fails to make design speed and is unstable at subsonic speed. Then follow bulletins on storage problems for Soviet rocket fuel; specifications for US military procurement of weapons silos; the workings of a Soviet-made field seismograph for detecting underground atomic tests; the name of the KGB rezident in Oslo, Norway; and the innards of a British torpedo.

Several journalists get into the act. A false-front reporter is from the CIA. The KGB pretends to be a couple of French academics. The British, German, and French services are slow on the uptake, and must play catch-up throughout. The more they all pressure the newsletter writer, an ill-paid, heavy drinking Canadian, the higher the price goes for the shares of the name-plate company which owns the publication, and supplies the SESAME secrets. It doesn’t take long for the “nasty suspicion” to dawn in the mind of the Canadian that his publication is a test run for the “introduction of modern sales methods in the world’s second oldest profession”. To keep him doing what he’s told, and quench his qualms, he’s offered a bonus by the proprietors.

A slap in the face, a disorientation drug, and concussion from a car colliding with a lamp post near Cornavin railway station in Geneva comprise the only violence — until the very end. Sex is ruled out because the KGB sends a lady who is “a Junoesque welterweight with greying black hair, a muddy complexion and the smouldering eyes of a martinet.”

The only pretence of morality is displayed by the Swiss counter-intelligence corps. According to Ambler, they are impelled by “the suspected violation on Swiss territory of a Swiss law designed to protect Swiss neutrality.” Swiss neutrality – now that’s a quaint anachronism, isn’t it? Click for answer. 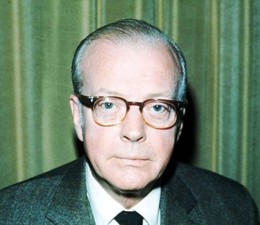 Ambler (right) was writing in 1969. Apart from his own investigation of investigative journalism in the plot, the other practicioner disappears from Geneva airport at the start of the tale. At the end, his disappearance is tracked across the Swiss border behind the airport at Ferney-Voltaire, France. His fate was to have been killed quickly, without pain, and his corpse dropped into the concrete mould of a construction site, never to be found again. He has no character, so his fate isn’t lamentable. Ambler puts it down to incautious greed for saleable information, if not exactly for truth.

Now that Europe is at war, does action follow fiction? Are there deal-making lessons to be learned from Ambler’s tale of the knowing colonels? Who now shall benefit from the sale of the truth?

The parts of the Intercom newsletter, and its owner, Interform Foundation, and behind it Intercom Publishing Enterprises A.G., are today played by hundreds of media publications, foundations, think-tanks, and corporations, including government organs and the parasite, er parastate entities known as universities. For this cast of characters, start here.

For them the war against Russia – psywar, info-war, hybrid war, sanctions war, economic war – started with a sequence of five big events in 2014 — the Maidan sniper killings of February 18 to 20; the overthrow of Ukrainian President Victor Yanukovich on February 21; the secession of Crimea from Ukraine and accession to Russia in March; the start of armed operations in the Donbass in April; and the shooting-down of Malaysian Airlines flight MH17 in July. The truth about the causes of each of these events – proximate and ultimate – is much investigated, much reported, much debated.

Notwithstanding, there has been no disclosure of authentic classified intelligence on these cases from any of the government agencies directly engaged in what took place. Not in official reports to parliaments, nor in leaks by officials into the public domain, nor in publications in the press. Not one whistleblower among the several thousands employed has communicated with the dozens of centres of investigative journalism whose mission – so they claim – is to gather and analyse the evidence otherwise missing from the public record. For an example of how incomplete and unbelievable the official investigation of the MH17 crash is proving to be, read this.

Nor have the watchdog organizations associated with Wikileaks, Julian Assange (below, left) , and Edward Snowden (right) reported a single fact or circumstance to explain the pervasive silence. They cannot break it either.

How then is it possible for Europe to march into war over an 18-month period, and for so little truth to be recognized about what has happened – never mind how much disagreement there is on all sides about how to interpret the facts?

The answer from The Intercom Conspiracy is simple. The purchase price for keeping the secrets of the war against Russia must be a multiple of the hundreds of millions of dollars being budgeted for waging the info-war on all sides, including the Russian side. But the payoff can’t be enough to ensure the silence of all those engaged in this war. Are they brainwashed? Afraid? Are they patriots? Are they comfortable at their posts, homes, holidays?

Ambler is much too dead to say. We might as well be.