Readers: I’m filing the Clinton email saga under criminality (a) because its demonstrably corrupt, and (b) because if an official privatizing their public communications isn’t criminal, we should find a way to make it so.

Setting up a “homebrew” email server: “‘You need to know what you’re doing and there is some programming involved,’ [Robert Siciliano, an online safety expert to Intel Security] said. ‘It’s not for the faint at heart'” [ABC]. So why do it? Doesn’t the government have any techies who can do the job?

“Earlier on Tuesday, the inspector general for the intelligence community told members of Congress that Mrs. Clinton had “top secret” information — the highest classification of government intelligence — in two emails among the 40 from the private account that the State Department has allowed him to review” [New York Times]. Gawd. I mean, it’s like over-classification never happens. This garbage appeals to the national security class; after all, secrecy is part of their self-licking ice cream cone, ka-ching. What’s crucial is the fact that Clinton privatized the server in the first place!

“A judge upheld a warrant allowing federal agents to search the email account of an indicted Republican operative who has worked for Rand Paul, Ron Paul and Mitch McConnell, according to court documents unsealed Tuesday” [Talking Points Memo]. “Benton’s attorney said that the account contains nearly 500,000 emails, including communications related to the presidential campaign of Kentucky senator Rand Paul, the 2014 re-election of U.S. Senate Majority Leader Mitch McConnell of Kentucky and the 2012 presidential campaign of Ron Paul.” Hmm.

“The overflow crowds showing up to hear Bernie Sanders these days are a testament not only to his current popularity and the campaign’s social-media savvy but also to the promotional abilities of an alchemy of like-minded interests: progressive activists, labor unions and even Sarah Silverman” [WaPo]. Silverman has 6.7 million Twitter followers. Impressive.

Obama writes a letter to the New York Times on the Voting Rights Act [New York Times, “President Obama’s Letter to the Editor”]. Sanctimonious garbage. Where have the Democrats been on this issue for the last two decades? Or, more to the point, since Jebbie’s voter suppression in Florida 2000?

“Sanders has eclipsed Clinton by a 44 to 37 percent margin, according to a new Franklin Pierce University/Boston Herald poll that was first reported by the Boston newspaper Tuesday evening” [The Hill]. More than a year ’til the election, so early days. But maybe Clinton will be the first woman front-runner for President to fail, twice.

“How I Helped Todd Akin Win — So I Could Beat Him Later” [Politico]. By Claire McAskill, trade traitor. Hmm….

“Donald Trump never skips a chance to remind audiences of his wealth, but he is proving reluctant to spend his own money on campaign essentials typical of a major presidential candidate” [Wall Street Journal, “Donald Trump Is Frugal With His Cash in Republican Presidential Race”]. Hmm….

Trump: “When you’re dealing, and that’s what I am, I’m a dealer, you don’t go in with plans. You go in with a certain flexibility. And you sort of wheel and deal” [New York Times].

“Head of Group Opposing Iran Accord Quits Post, Saying He Backs Deal” [New York Times]. Always nice to see an apparatchik do the right thing. It does happen!

MBA Mortgage Applications, week of August 7, 2015: “Purchase applications fell 4.0 percent in the August 7 week but remain sharply higher than a year ago, up 20 percent” [Bloomberg].

Atlanta Fed Business Inflation Expectations, August 2015: Down, along with costs [Bloomberg]. “With commodity prices falling once again, led by oil, and with wage growth soft, inflation increasingly looks like it’s not moving to the Fed’s 2 percent goal in what will be a key issue at the September FOMC.”

JOLTS, June 2015:  “Job openings contracted in June to 5.249 million from 5.357 million in May,” below expecations [Bloomberg]. “Job growth has been no better than moderate this year and this report, which is mixed, doesn’t point to acceleration.”

“The [Yuan] devaluation was interpreted in the markets as a sign of capitulation by China to forego a stable currency policy in a last-ditch effort to revitalize sluggish export growth” [Bloomberg].

“In a weakening global economy from a lack of demand (sales) and ‘western educated, monetarist, export-led growth’ kids now in charge globally, the path of least resistance is a global race to the bottom to be ‘competitive'” [Mosler Economics]. “I expect the Euro to now move ever higher until its trade surplus goes away, as global fears of an inflationary currency collapse are reversed and Euro buying resumes as part of global export strategies to export to the Euro zone.”

“U.S. stocks opened lower for a second day in a row on Wednesday as China weakened its currency further, increasing worries about a global economic slowdown.” [Reuters]. Weird. Stocks are supposed to go up.

“[Teach For America] saw a decline in its number of accepted corps members after previously seeing a drop in applications for the second year in a row” [HuffPo]. At least the labor market is strong enough that desperate would-be teachers don’t have to be scabs…

“Hillary Clinton met with five Black Lives Matter activists behind closed doors following her campaign event here on Tuesday evening, after the group tried to disrupt the forum but arrived too late to get past [Secret Service] security” [Politico]. That’s odd, since everything I’ve seen about #BlackLivesMatter protests is that they’re disciplined, focused, creative, and strategic. And the activists in Seattle and Netroots Nation certainly arrived on time.

“Members of the media were never in the room with Clinton and the protesters” [CNN]. Reporting seems unclear on whether that was at the protesters’ request or not. However: “The #BlackLivesMatter members filmed their meeting with Clinton, however, and plan to put the video out.”

Julius Jones, the head of #BlackLivesMatter Worcester, said after the meeting with Clinton that he felt both parties got something out of it.

“She got something out of the meeting. That much is certain,” he said. “I feel like what we got out of the meeting was to actually press her in a very real way — probably in a way that she hasn’t been pressed in a long time about not only her role as a presidential candidate, but her role as first lady, senator and secretary of state.”

Well, I dunno. I know the Massachusetts groups are not the same as the Seattle group. That said, I would say that taking over the mic in Seattle “pressed” the Sanders campaign “in a very real way.” I don’t see how a private — and cordial — meeting “presses” the Clinton campaign in the same “very real” way, and I would like very much to know how the video will be edited, and whether anybody asked whether the meeting could be livesteamed. And Clinton, via the TNR announcement, was given plenty of time to script what she wanted to say. Not so with Sanders.

Wow, who knew? The ObamaCare website is still a clusterf*ck [Healthcare Finance].

Internal controls are lacking when it come to setting an individual’s eligibility for tax credits and cost sharing reductions for health plans bought through Healthcare.gov, according to a new report by the Office of the Inspector General. [T]he Office of the Inspector General found that of 45 samples audited, 20 had inconsistencies in eligibility data.

Certain controls were effective, such as verifying whether an applicant served a prison sentence [!!], according to the OIG.

So all that public-relations crapola about the genius hero programmers who made the ObamaCare website work? True, their efforts made the ObamaCare website work on the front end; the site didn’t fall over when too many people logged in. Yay, but modified rapture, since there’s no way of knowing whether the data people entered on the front end was validated on the backend. And the administration didn’t have the genius programmers fix that!  THEY NEVER FIXED THE BACK END!!!

So, will there be refunds? How about clawbacks?

Readers, some of these links are a tad stale; I had other, more pressing matters to cover. And that’s an indication of the problem, isn’t it?

“Building A Successful Farm To School Movement: One Person, One Plot, One Policy At A Time” [Health Affairs Blog]. Encouraging!

“Japan has restarted its first nuclear reactor to generate power since 2013” [Ecowatch]. What could go wrong?

“Get ready for another ideological death struggle, this time over climate” [WaPo].

“[S]ome of the largest American Catholic organizations have millions of dollars invested in energy companies, from hydraulic fracturing firms to oil sands producers, according to their own disclosures, through many portfolios intended to fund church operations and pay clergy salaries”  [Reuters]. “The pope’s encyclical [on fossil fuels], a letter sent to all Catholic bishops, has sharpened a debate well underway in Catholic organizations and other churches about divestment. But many major American dioceses have resisted the push.” Of course, it’s not just the Catholic church…

“Climate risks don’t begin at 2C, [Professor Camille Parmesan, an expert in biodiversity at the University of Plymouth in the United Kingdom] said; it’s more like where they go from high to intolerably high” [Reuters].

“The Environmental Protection Agency and its contractors may have to pay millions of dollars in damages after mistakingly releasing toxic sludge that tainted a Colorado river, preventing its use by ranchers and residents” [Bloomberg]. Mustard-colored water… So far as I know, the miners who created the toxic sludge in the first place don’t owe a nickel. I’ll Be Gone, You’ll Be Gone….

“Governor Scott Walker and the Wisconsin legislature have joined forces to gut statutory guarantees of tenure and shared governance – the twin pillars protecting academic freedom and the integrity of scientific research – in the University of Wisconsin system” [Guardian]. Filing this under class warfare because turning state universities into trade schools imposes agnotology on the 99% who attend them.

“A Visual Introduction to Machine Learning” [R2D3]. Gorgeous visualization. Sort of what Bloomberg could have been with its redesign — somebody sane seems to have dialed it back — if the redesign hadn’t been such a mess.

“Oracle security chief to customers: Stop checking our code for vulnerabilities [Updated]” [Ars Technica]. “Program testing can be used to show the presence of bugs, but never to show their absence!” –Edsger Dijkstra 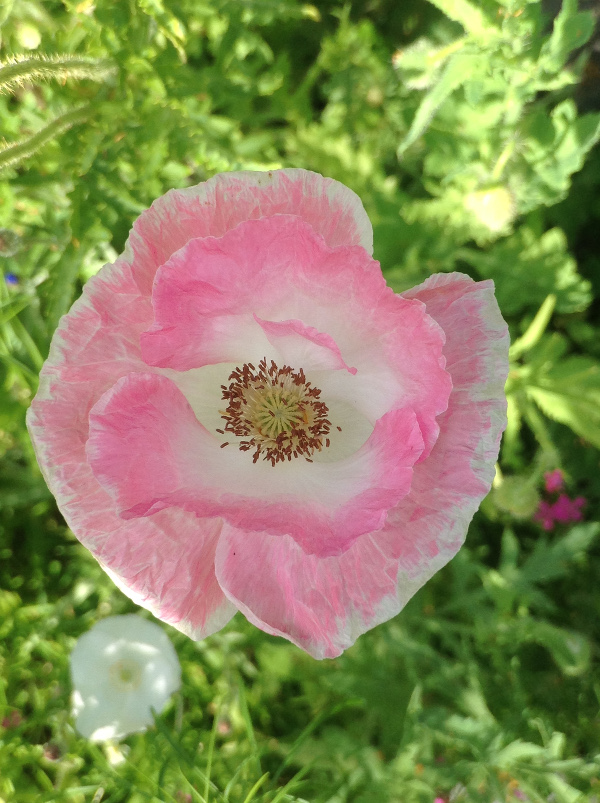 A poppy from my wildflower bed…

If you enjoy Water Cooler, please consider tipping and click the hat. I need to keep my server up! And cover the travel home, as opposed to the first leg of the trip….