“Americans of ordinary means have made 400,000 donations — about 80 percent of them were $200 or less — to Mr. Sanders. Contrast that with the appalling fact that fewer than 400 of the nation’s most affluent families, writing six- and seven-figure checks, account for almost half the money raised so far by both parties in the campaign” [New York Times]. There are not very many of the Shing.

“In 1980, this elite segment of the population contributed a total of 16% of all campaign contributions. Today, it’s over 40% and heading towards 50%. Yes, already, close to HALF the money in American politics is coming from 0.01% of the wealthiest donors – that’s around 25,000 compared to nearly 150 million registered voters” [Crowdpac]. As above….

“An FP investigation shows that Imaad Zuberi, who has bundled hundreds of thousands of dollars for leading Democrats, failed to disclose the extent of his ties to a foreign government” (Sri Lanka) [Foreign Policy]. “Imaad Zuberi, age 45, is a private equity fund manager, venture capitalist, and an elite political fundraiser.” Silly boy! He should have laundered his money through the Clinton Foundation. That’s what it’s for! Who the heck was advising this guy?

“Over and over during his presidential campaign, Walker has declared that, as president, he’d stand up to “special interests.” But by signing legislation a few weeks ago committing $250 million in public funds—which, once interest is included, balloons to more than $400 million—to the construction of a new stadium for the Milwaukee Bucks, Walker has made it clear, once again, that he’s willing to use taxpayer money in ways that help his political allies” [Politico].

“Bill Clinton Sought State Department OK For Paid Speeches Related to North Korea, Congo, New E-mails Show” [ABC]. ” The catch? The dictators of Congo and the Democratic Republic of the Congo would both be attending — and required photos with Bill Clinton. The speaking fee? A whopping $650,000. ”

“Candidate Loyalty Oaths Are Unenforceable And Unconstitutional [Outside the Beltway].

“in Nevada, the third state on Democratic primary calendar, Sanders faces a challenge that thus far has been the principal sticking point of his campaign: moving past a core supporter base that is largely white, and winning favor among minority voters” [Politico].

“Meet the woman who confirmed Trump’s hair is no toupee” [CNN]. Trump invited her up on stage!

Personal Income and Outlays, July 2015:  “On the consumer, the data are very solid led by a 0.4 percent rise in income that includes a 0.5 percent rise in wages & salaries which is the largest since November last year” [Bloomberg]. “There’s no hurry for a rate hike.” And: “The data this month showed relatively strong income growth – spending grew but grew slower” [Econbrowser]. But: “[N]ot to forget health care premiums count as consumption expenditures, with a one time adjustment in progress as previously uninsured people become insured and begin paying premiums” [Mosler Economics].

Consumer Sentiment, August 2015: “An early reading on the effect of global volatility is downbeat as the consumer sentiment index came in well below expectations” [Consumer%20Sentiment“>Bloomberg]. “[T]he effect isn’t enormous. This report is probably a wash for the September FOMC.”

“Week 33 of 2015 shows same week total rail traffic (from same week one year ago) marginally expanded according to the Association of American Railroads (AAR) traffic data. Intermodal traffic expanded year-over-year, which accounts for approximately half of movements. but weekly railcar counts continued in contraction” [Econbrowser]. Intermodal up, railcar down is the pattern, but why? Econbrowser backs out coal and grain, so it’s not that.

“An alternative measure of economic output, gross domestic income, advanced at a much slower 0.6% pace last quarter. By that gauge, economic growth barely inched ahead in the first half of the year. (GDI advanced at 0.4% pace in the first quarter versus a 0.6% increase for GDP)” [Wall Street Journal, “By Another Measure, U.S. Economic Growth Has Nearly Stalled This Year”].

“Markets Debate Drivers of US Treasuries” [Across the Curve]. A fine roundup.

The Fed: “This September meeting is the gift that keeps on giving. Right now it is giving by the shear [sic] quantity of truly bad commentary arguing for a rate hike next month” [Tim Duy’s Fed Watch].

The Fed: “Cleveland Federal Reserve Bank President Loretta Mester said Friday she is “reasonably confident” inflation will move back towards the Fed’s 2% inflation target, but she has pushed back the timeline as to when it reaches it.” [Market News].

The Fed: “Federal Reserve Bank of Minneapolis President Narayana Kocherlakota said Friday he does not believe the Fed should raise interest this year, and the central bank may have to consider further quantitative easing” [CNBC].

“Technology issues at Bank of New York Mellon Corp., the largest fund custodian in the world by assets, are preventing the bank from pricing hundreds of mutual and exchange-traded funds, The Wall Street Journal reported late Wednesday. That means investors can’t value their holdings, making trading during one of the most volatile market weeks in a decade even more complicated” [Francis McKenna, Market Watch]. But this says BNY are crooks who skim from their clients. Are we 100% sure these are IT problems?

“[A] collective $29.5 billion (£19.13 billion) flooded out of equity funds over the week [according to Bank of America Merrill Lynch’s “flow show” roundup], and that’s the worst since BAML’s data begins, going all the way back to 2002″ [Business Insider].

“Since July, American households — which account for almost all mutual fund investors — have pulled money both from mutual funds that invest in stocks and those that invest in bonds. It’s the first time since 2008 that both asset classes have recorded back-to-back monthly withdrawals” [Bloomberg].

“On average, hedge funds are down 2.9pc so far this month and 1.7pc in the red for the year, according to an index compiled by Hedge Fund Research. However, this drop compares favourably to a 5pc fall in the S&P index and a 5.7pc fall in the FTSE 100” [Telegraph].

“U.S. crude has gained about 16 percent over two sessions, headed for its first weekly rise since mid-June. If the day’s gains stick, it would be the second largest two-day rise in 25 years” [Reuters]. Headline uses the word “frenzy.” Is that like a “fracas,” except with money? Sigh…

“In what has to be a major embarrassment, Malaysian Prime Minister Najib Razak has quietly cancelled his appearance as a speaker at the prestigious 16th International Anti-Corruption Conference and Transparency International gathering, to be held Sep. 2-4 in the country’s political capital of Putrajaya” [Asia Sentinel]. Heck, with the $700 million in his personal bank account, Najib could just set up his own conference!

“Does it matter if Corbyn can’t win for Labour?” [Byline]. The next election is what, five years away? From the hysteria of Blairite placeholders, you’d think it was tomorrow.

The MP who claimed expenses for his moat has now been made a lord [Telegraph]. Seems right.

“Planned Parenthood Videos Were Altered, Analysis Finds” [New York Times]. Wow, who could have predicted that?

“In order to obtain a copy of the NSA’s main XKeyscore software, whose existence was first revealed by Edward Snowden in 2013, Germany’s domestic intelligence agency agreed to hand over metadata of German citizens it spies on, ” according to Die Zeit [Ars Technica].

“An appeals court in the District of Columbia has lifted an injunction against the National Security Agency’s call records program on grounds that the plaintiff has not proved his own phone records were collected and so lacks standing to sue” [WaPo]. That’s some catch.

“[E]ncryption has become so controversial that many people are unwilling to expound upon the debate [within the administration] on the record. Yet this article, which relies on interviews on and off record from more than two dozen officials from tech and security companies across the country, reveals the American business community worries such a policy, if enacted, would threaten the competitiveness of their businesses” [Christian Science Monitor].

“Let’s take away the emotion for a moment,” says Scott Montgomery, vice president and chief technology strategist for Intel Security. “Imagine you want to protect your house, and I’m going to sell you a deadbolt. That deadbolt is absolutely perfect. It’s the best deadbolt that’s ever been made. No one can break in … . Except, I’ve put in one method by which someone can break in.”

Obama has yet to make a decision…

“Thousands have died after being found fit for work, [UK’s Department for Work and Pensions] figures show” [Guardian]. Slackers. If they really wanted to work, they wouldn’t die, now would they?

“The median total compensation of CEOs of U.S. public companies in the Russell 3000 index increased 11.9% in 2014 versus the prior year. Most workers aren’t seeing pay rises of anywhere near that” [Market Watch].

“They hacked her pancreas and found love along the way” [Business Insider]. This is in fact really cool. And if the headline were really clickbait it would have been something like “Couple hack her pancreas with this one neat trick!”

“Award-winning author Neil Gaiman, who co-wrote Good Omens with the late fantasy writer, said Sir Terry wanted any work being penned at the time of his death to be ‘taken out along with his computers to be put in the middle of the road and for a steamroller to steamroll over them all'” [Daily Mail].

“Days after he confessed to cheating on his wife and an addiction to pornography, Josh Duggar has entered rehab” [Business Insider]. May he find peace on yet another lucrative reality TV show.

“Gay Teen Worried He Might Be Christian” [The Onion].

Crackdown on little libraries [The Atlantic]. Stupid, albeit anecdotal.

“A team of Greek and Swiss archaeologists have discovered what appears to be a significant coastal settlement now covered by the Mediterranean Sea” [Spero News]. About three acres, with “stone defensive structures that are of a ‘massive nature, unknown in Greece until now.'” 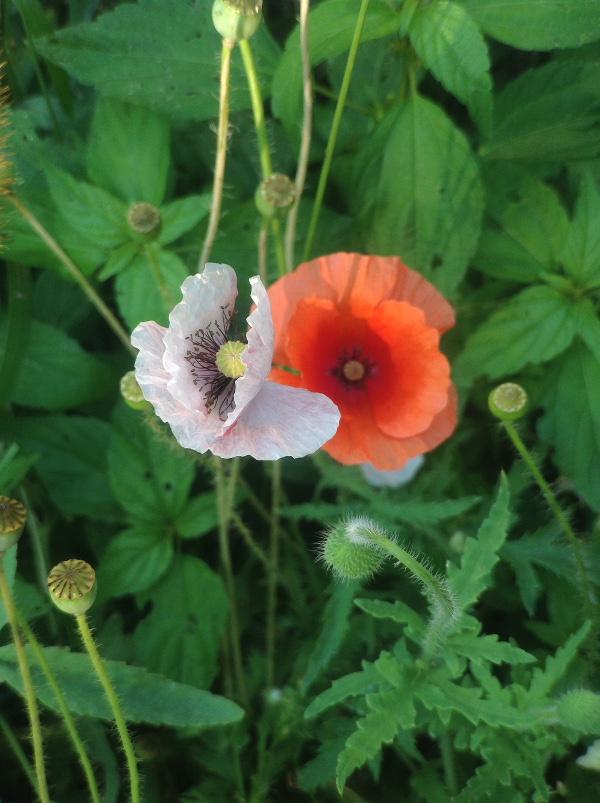 Last of the poppies. Winter is coming….