By Perry Mehrling, a professor of economics at Barnard College. Originally published at his website.

In a followup from their much-discussed (by me here) May memo, Pozsar and Sweeney predict “A Turbulent Exit” when the Fed begins to raise rates.  FT Alphaville and Bloomberg both appreciate the importance of the memo, but focus attention on the exchange rate dimension, and so miss the main point.  Let’s walk through the argument more slowly, so as to put the exchange rate consequences in proper perspective.

As in their May memo, P&S point to an imminent and very large rotation of existing cash pools away from prime money funds and various bank liabilities (domestic and foreign) into government-only money funds.  Here is the picture:  Exhibit 14. 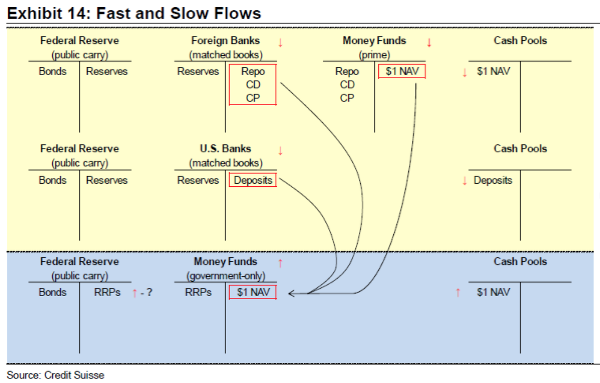 There are two reasons for this rotation.  One is the shift to floating NAV for prime funds, but that is not imminent and so the resulting flow should be “slow”.

The other is the Fed’s shift to higher base interest rates, and that apparently is imminent (whether September meeting or the next one), and so the resulting flow should be “fast”.  Fast flows are likely to be disorderly.  In the words of P&S, “someone won’t get things right”.  Hence, turbulent exit.

The reason for the fast shift is that, given regulatory changes, banks really don’t want to be in the business of meeting demand for cash balances from the large institutional cash pools.  So probably they will not match the Fed’s interest rate hike on liabilities they offer to the cash pools, providing cash pools with a clear incentive to move their money elsewhere, pronto.  Government-only money funds are the likely destination because they are constant NAV.  The question is what government assets are out there for the funds to buy?

The answer, according to P&S, is the RRP facility of the Fed.  And the best way to reduce turbulence to a minimum, they suggest, is for the Fed to offer a full-allotment RRP facility at the new higher interest rate.  Suppose, for the sake of argument, that it does so.

As cash pools withdraw from bank deposits, U.S. banks shrink their balance sheets on both sides, shedding excess reserves.  As money flows into government-only money funds, that money gets invested in overnight RRP at the Fed.  On the Fed’s balance sheet, the effect is simply to shift the liability structure from reserves (held by banks) to RRP (held by money funds).

Similarly, and more slowly, as cash pools withdraw from prime money funds, these funds liquidate their holding of foreign bank liabilities (repo, CD, CP), causing foreign banks to shrink their balance sheets on both sides, also shedding excess reserves.  As the cash pool balances get shifted into government-only money funds, these reserves also get shifted into RRP balances at the Fed.

A key reason for turbulence in this process is that while some banks have excess reserves more than adequate to meet the cash pool draw down, other banks do not.  Interbank markets presumably could make up for this, as surplus banks lend to deficit banks, but these markets are a bit rusty these days from disuse.  Hence expect turbulence as they get up and running again.

The real question is whether the Fed will in fact offer a full allotment facility.  P&S suggest that they will be forced to do so, and it is the Fed’s commitment to controlling base money rates that will force them.  The RRP facility (for non-banks) is supposed to be a floor on rates, while the IOER facility (for banks) is supposed to be a ceiling.  Floors and ceilings don’t work unless you have elastic supply at those rates.  That’s what full allotment would be.

Supposing full allotment, what happens to rates?  P&S basically say that the existing rates structure will simply shift up pari passu with the base rates.   RRP currently 5 b.p. shifts to 25 b.p., while IOER currently 25 bp shifts to 50, and everything else (tri-party repo, fed funds effective, LIBOR) shifts with it.

They say nothing explicit about exchanges rates, but they do suggest that “A full allotment RRP facility could accelerate FX reserve managers’ shift out of euros for U.S. dollars”, which I suppose implicitly suggests appreciation of the dollar.  That’s the phrase that has captured attention so far.  But I wonder about that.

It seems clear to me that the Fed does not want to be central banker to the world.  Also clear, the Fed is willing (more or less necessarily) to serve as such at one remove.  Foreign banks issue dollar liabilities and make dollar loans, so they need dollar reserves, but those reserves should be accounts at domestic banks, not at the Fed.  Foreign central banks manage the balance of payments for their individual nations, and hold some dollar reserves for that, but those reserves should largely be Treasuries, not deposits at the Fed.  The Fed is prepared to be lender of last resort to both of these channels, but at prices away from the market, outside spread not inside spread.

From this point of view the important thing is not the Fed’s Foreign Repo Pool, which P&S note took an upward jump after the ECB cut deposit rates below zero in June 2014 (Exhibit 19), but rather the unlimited swap lines with the major central banks, which I have discussed in a previous post.