Yves here. Repo is a critically important mechanism by which major dealer banks finance themselves, and repo is therefore often a major topic in bank reform discussions. We thus thought it would be useful to post this overview.

By Daniela Gabor, an associate professor in the Faculty of Business and Law at the University of Western England-Bristol and Cornel Ba, an assistant professor of International Relations and Co-Director of the Global Economic Governance Initiative at Boston University. This is an excerpt from a recent paper that was originally published in the Journal of Common Market Studies
The ‘repurchase agreement’ (often referred to as ‘repo’) has become a key financial device for contemporary capitalism. Though the legal and formal definitions of a repo transaction can make it sound quite complex, it most simply can be thought of as a (usually short-term) secured loan. In a repo transaction one institution (the lender) agrees to buy an asset from another institution (the borrower) and sell the asset back to the borrower at a pre-agreed price on a pre-agreed future date (a day, a week or more). The lender takes a fee (repo interest rate payment) for ‘buying’ the asset in question and can sell the asset in the case that the borrower does not live up to the promise to repurchase it. The fundamental purpose of this circular transaction is to lend and borrow funds (and, in some cases, securities). While financial institutions use it to raise finance, central banks use it in monetary policy.

To illustrate, suppose Deutsche Bank (DB), acting as a borrower, sells assets to a buyer (Allianz), acting as a lender, and commits to repurchasing those assets later (see Figure 1). Allianz becomes the temporary owner of the assets, which also serve as collateral, and Deutsche Bank has temporary access to cash funding. DB and Allianz also agree that the purchase price is less than the market value of collateral (€100) – in this case a 5 per cent difference, known as a haircut. This provides a buffer against market fluctuations and incentivizes borrowers to adhere to their promise to buy securities back. In our example, DB provides €100 worth of collateral to ‘insure’ a loan of €95. When the repurchase takes place, DB pays €95 plus a ‘fee’ or interest payment in exchange for the assets it had sold. 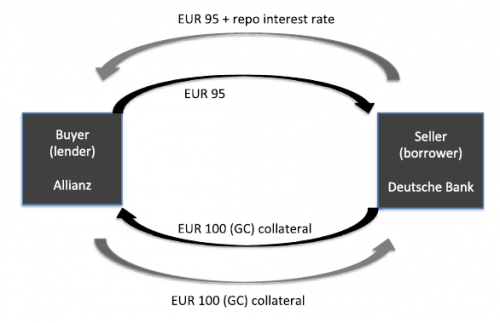 For DB, the repo is an SFT (securities financing transaction). DB uses its portfolio of marketable securities to raise short-term market funding without giving up the returns on those assets. Because repos are structured legally as sales/repurchase (of collateral) agreements and in economic terms as cash loans,1 Allianz does not assume the risks and returns on the assets it owns temporarily, but rather has to send all returns on those assets to DB. Financial institutions like to use repos to raise finance because the use of collateral makes them at once less costly and less risky than borrowing from unsecured money markets.

The presence of collateral also enables cash-rich non-bank institutions such as insurance companies, pension funds and non-financial corporations to participate in money markets (Pozsar, 2014). In our example, Allianz can use the repo to increase returns on its cash; further, it can also reuse the collateral (‘repo it out’) if it needs cash before the repurchase with DB is executed.

It should be noted that there are different kinds of repo agreements and the kind we have just described is known as a GC (‘General Collateral’) repo. This is a funding-driven repo. What makes GC repos distinctive is that the parties to the repo transaction agree what kind of securities can be considered equivalent as collateral and accept any or all those securities. In other words, any security that belongs to a certain agreed-upon category will do. We visualize this in Figure 1: assuming the agreed-upon GC basket above includes AA-rated Belgian and AAA German bonds, Allianz would accept €100 of German bonds, or €100 of Belgian bonds, or any combination of the two. A typical repo contract would allow DB to replace some or all of the bonds in the GC portfolio on any day of the repo contract, as long as they are of equivalent value, as determined by the so-called ‘mark-to-market’ technique, which requires that the value of collateral portfolio be constantly updated according to market fluctuations.

Using mark-to-market is meant to protect lenders like Allianz from the failure of counterparties like DB. In effect, through the repo contract Allianz becomes the legal owner of collateral so that it can sell the collateral and recover the cash. For this system to work without disruption, Allianz needs to ensure that the market value of its collateral portfolio remains equal to the cash loan. This typically leads to a preference for high-quality collateral, such as investment-grade government bonds. These trade in liquid markets and generally experience less price volatility, therefore making the repo funding cheaper. Indeed, before the global financial crisis, market haircuts on government collateral were typically zero (see CGFS, 2010). Additionally, repos collateralized with government bonds also enjoy preferential regulatory capital treatment (ECB, 2002a). In the event that the market value of the collateral falls before the day of the repurchase, the legal right to make a margin call protects Allianz. In other words, Allianz requires DB to provide more collateral to make up for the shortfall in value. Conversely, if collateral increases in price, Allianz returns the difference back to DB, allowing it to raise further funding and increase leverage (Adrian and Shin, 2010).

Repo transactions have also altered the policy toolbox of contemporary central banks. Repos have overtaken the traditional outright sale and purchase of assets as monetary policy instruments (see ECB, 2013b). Central banks use repos to meet banks’ demand for reserves and thus influence interest rates on unsecured inter-bank money markets where they implement monetary policy. Of critical importance, the central bank’s collateral framework – the terms on which it lends to banks, including the potential use of haircuts, collateral acceptability and margining practices – is not exogenous to how repo markets work. Indeed, the following sections show that it can have systemic, if poorly understood, effects on how repo markets treat and manage collateral, on liquidity in collateral markets and on banks’ ability to preserve access to (repo) market funding in crisis (Whelan, 2014; CGFS, 2015).