“I wish I had sent one more helicopter to get the hostages,” former US president Jimmy Carter said at one of his farewell appearances in Atlanta recently, “and we would’ve rescued them, and I would’ve been re-elected.”

Compared to his predecessors and successors Carter was intellectually superior. He also didn’t suffer from the corruption of Bill Clinton, the untruthfulness of Barack Obama. But unlike all of them, Carter had an inferiority complex. It started with his career mentor, the Polish Jewish admiral Hyman Rickover, and ended with his national security advisor, the Polish Catholic Zbigniew Brzezinski. Their combination has produced the eventual destruction of the US positions in Afghanistan, Iran, Iraq, Libya, Egypt, Yemen, and these days, Syria.

The other side to Carter’s complex is Carter’s and Brzezinski’s wishful thinking. Not their misjudgements have brought these defeats about, they say aloud. Why, they weren’t defeats at all, but victorious strategies missing just one increment of the force multiple, and costing the US little blood, affordable treasure. One more gunship in the sky, and their triumph would have been recognized for what it was. That’s to say, what they in their dodders think it was.

Brzezinski is saying the same thing. In an editorial for the Financial Times, published on Monday, Brzezinski claims “the Russian naval and air presences in Syria are vulnerable, isolated geographically from their homeland. They could be ‘disarmed’ if they persist in provoking the US.” When Brzezinski says he will disarm the Russian expeditionary force in Syria, he means to raise the force multiple on the US side until it is so large, he thinks it can either destroy the Russians, or force them to run away. That’s the US Sixth Fleet, above and below the surface of the Mediterranean; plus USAF and NATO units in their dozens deployed in Italy, Greece, Turkey, the Persian Gulf. To protect the command-and-control bunkers from which they run the Syrian war, and the resupply lines through which they run men, money and munitions, they must also take the air cover away from the Russians. With this week’s demonstration of Russian cruise missile firings from Russian territory, that’s a tall order. This is a shooting-match which, in order for the American side to run the Carter-Brzezinski risk record, must have a force multiple over the Russian arms of not less than 5 to 1; better 6 to 1, to be on the safe side.

Now exactly who at the Pentagon and at NATO headquarters is confidently calculating what the safe side of this multiple should be so that the plan to “disarm” the Russians will be more successful than the military walkover Carter and Brzezinski presided over in Iran on April 24, 1980?

Scratch presidential candidates of any party (or no party at all) at the start of the 2016 election campaign: they all know that foreign wars don’t win election votes, and hot, almost-world war with Russia —well, that’s off the polling scale. American blood isn’t affordable at election time – not the smallest drop, not of “volunteers”, “mercenaries”, not of US special forces or US regulars. Remember the calculus of the days when the Vietnam War was being lost – battlefield casualties + inflation + unemployment = death to presidential candidates

Take a close look then at the map of Syria, as drawn by the US Agency for International Development (USAID). 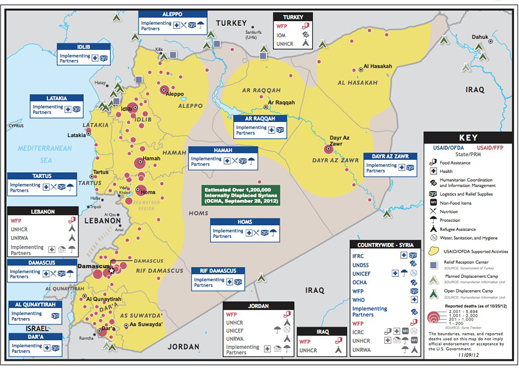 On to this map draw 300-km range lines from the Russian naval base at Tartus, running north and south along the coast, and eastwards inland. Cross out every ridge-line bunker in which US advisors guide Chechen, Arab, and other mercenaries to their targets; blind their electronics and jam their communications for calling in the air cover required to operate in force against the Syrian government forces; and train for operations in the Ukraine and Russian Caucasus, including Dagestan and Chechnya.

Draw 1,500-km lines from Russia, across Iranian and Iraqi territory, to every trail, track or road across which American dollars, arms and men can move. Destroy what is there right now, and imperil everything which may be moved to replace it. 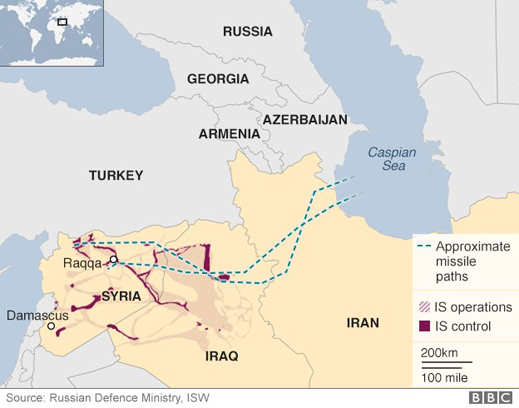 Draw flight radiuses of Su-25 ground-attack fighters eastward and northward until they push the retreating and regrouping US army into the uncovered deserts, where the Kurds, Iranians and Iraqis are waiting to kill them all. This isn’t “hybrid warfare”, as described from the armchairs of Chatham House, London, or Freedom House, Washington. This is real warfare – and with a force multiple of several dozens or hundreds to one, in the Russian favour for the time being.

So the question becomes — how much time is there for the time being? That’s to say, how long must the US army on the ground wait before Carter’s extra helicopter will arrive, plus Bzrezinski’s “disarming” cavalry? Or, to put the question more urgently, how much time do the men on the ground have before they must run away to save their lives? The question received its answer overnight from Alexander Goltz, the Moscow-based military analyst for the NATO Defense College: “Russia has asked [the US] to remove all American instructors [in Syria], and I suspect that it will be done.” For Goltz’s record as the NATO military observer on the ground in Moscow, read this.

Goltz’s acknowledgement means that unless the NATO defence ministers decide this afternoon and evening to go to war with Russia, an allied expeditionary air, naval and ground force with a multiple large enough to challenge the Russians is impossible now. This was also conveyed when the New York Times was called in yesterday for a briefing by “an official with the alliance [of Russia, Syria, Iran, Iraq and Hezbollah], who spoke on the condition of anonymity to discuss military strategy”. Dispensing with the Financial Times, the Economist, and Der Spiegel, mouthpieces of militaries which don’t exist in the Middle East, the Russian strategic objective is now delivered directly to the US. “No more questions. Not at any level,” the Times reports being told.

Russia has established a no-fly zone on every one of Syria’s frontiers, and will make an Alawite fortress along the coastal plain. As for what happens in the northern and western deserts, that’s up to the Shiite armies of Iran and Iraq to decide, with or without Russian air cover, but with the assurance of no American, NATO, Turkish, Saudi, Jordanian or Emirati air cover.

Gennady Nechaev, a military analyst at Vzglyad in Moscow, explains: “There is airspace, but either it is controlled by the US or by our Air Force. But today there is no issue of control of air space. We are talking about control of ground space. There operations can be of two types: direct destruction from the air and from insulation of the area of operations by air in order to avoid movements of the enemy and incoming reserves. In this case, the task is hardly feasible, as there is an open border with Iraq on the side of Turkey. The boundaries are not controlled. The problem could be solved [by Russia] if a blow can be dealt along the entire depth of the space under the control of ISIS. At the moment there is an operation against the infrastructure of ISIS. Infrastructure is a fairly loose concept, because they don’t have civilian infrastructure. There are military links and connexions which must [operate] to supply weapons. For these purposes Russia is now applying its strokes.” 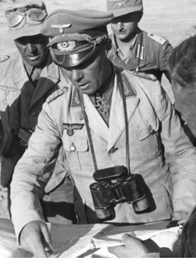 A German military analyst said overnight: “This has never been seen in the history of the Middle East since the defeat of [Field Marshal Erwin] Rommel (right). The Red Army is invigorated to a level that has never been fielded on the Middle Eastern map.” Evgeny Satanovsky, a Moscow academic expert on the Middle East, adds: “Moscow does not want to divide terrorists into ‘ours’ and ‘not ours’. The emergence of the Russian Air Force in Syria…has radically changed the situation in the region. Expect something different in principle.”

What if the Saudis shift their forces from bombing southward and eastward in the Yemen towards the west, and they invite US forces to defend their sorties from Saudi airfields or from carriers in the Persian Gulf? An Egyptian military source comments: “The king [Salman] has Alzheimer’s, and his son [Mohammad bin Salman], the real ruler of the kingdom, is too young; too insecure in the royal succession; and too vulnerable domestically. If either of them makes so much as a nervous twitch towards the Syrian frontier, the oil price will return to the level Russia wants, and needs. There will be no support for the Saudis against the Russians from their only real Arab guarantor, [Egyptian President Abdel Fattah el-] Sisi. And long ago, when Obama installed the Moslem Brotherhood in Cairo, [Sisi] realized the American strategy, Obama’s promises, are the gravest threat to Egyptian and Arab security there is. That’s because he can’t control the Washington Amazons who run his warmaking machine, or the jihadists he employs to fight. Without air cover, supply lines, and dollars, they are doomed. The Saudi sheikhs won’t risk trying to save them.”

For more on Putin’s management of the Saudi relationship, read this.

London sources familiar with Israeli politics add that Russian strategy has the tacit backing of Israel. “This is because [President Vladimir] Putin has told [Prime Minister Benjamin] Netanyahu that Israel can count on a no-threat zone running from Damascus south and east to the Golan. No threat means no Syrian Army, no jihadists. Russia and Israel will now have what [Israeli Prime Minister David] Ben-Gurion once explained was Israel’s long-term objective – the breakup of the large, potentially powerful secular Arab states into small sectarian territories too weak to do anything but threaten each other.”

According to the New York Times version, “one U.S. senior defense official” claims “their [Russian] operational patterns [in Syria] remain the same [as in Ukraine].” According to US Defense Secretary Ashton Carter, “we believe Russia is making a mistake in their actions in Syria.” This Carter has a sentimental tie but no blood relationship with Helicopter Jimmy. For more on what that is, take a look.