As Oregoncharles put it, in terms of labor force participation, “Obama has now cancelled out the entire effect of the Women’s Movement.”

The jobs report today has been described as “ugly,” though it certainly didn’t, or shouldn’t have, come out of the blue: Layoffs in the energy, Big Tech, retail, and other sectors have recently mucked up our rosy scenario.

Year-to-date, we’re at nearly half a million job cut announcements (493,431 to be precise), up 36% from the same period last year. And they’re “on track to end the year as the highest annual total since 2009, when nearly 1.3 million layoffs were announced at the tail-end of the recession.”

These dogged references to crisis-year 2009!

It’s been going on all year. In the first half, it was the energy sector. But more recently, Big Tech and others jumped into the fray.

The energy sector is still number one this year with 72,708 job cut announcements. Retail isn’t far behind with 68,871, the computer industry with 58,874, and industrial goods with 44,057. These are just the largest employers with big announcements that make it into the report.

When a smaller company lays off 20 people, it doesn’t show up anywhere, unless it’s a startup in the “unicorn” club with a “valuation” over $1 billion. Then the media drool all over it.

Evernote, which raised a total of $302 million by May 2012, with the last round giving it that glorious $1 billion “valuation,” announced its first layoff in January, and its second a couple of days ago. Because it’s a formerly hot startup, it made the news. But a small manufacturer quietly laying off 100 people might barely make the local press.

So now we get today’s “ugly” jobs report. It wasn’t the end of the world, compared to the end-of-the-world jobs reports in 2009. But there was a trend that, if it continues, is truly ugly. More on that in a moment.

The economy added only 142,000 jobs in September, according to the Bureau of Labor Statistics. June and July were revised down by 59,000. Hourly wages edged down 1 cent, so not the end of the world either, just the continuation of a sad theme. Average weekly hours also edged down. Manufacturing shed jobs for the second month in a row, as we knew it would [read… US Manufacturing Recession Draws Eerie References to 2009]. But the headline unemployment rate remained comfortably at 5.1%, in part because the participation rate dropped to just 62.4%, the worst since 1977.

Over the past couple of years, there has been a trend in the employment numbers that was at first hard to see due to the volatility of the monthly data. But now the trend has come into full bloom: the deteriorating growth of the number of employed people in the US has turned into shrinkage.

It doesn’t exactly corroborate the headline notion that 142,000 jobs have been created, even as the number of employed shrinks.

Was it just a statistical quirk, something that will reverse with flying colors next month? We hope so. But beyond this hope, there is the two-year trend, and despite all the ups and downs and the month-to-month volatility, the trend is starting to crystallize. 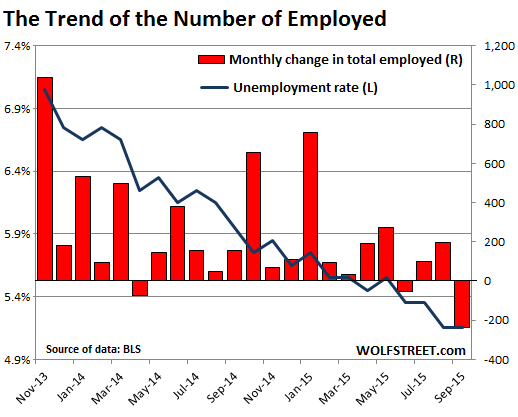 If this worsening trend continues, it would be truly chilling because the Fed still has the interest rate at near zero, along with nearly every country in the developed world, and QE is still the standard in Europe, Japan, and elsewhere. Central banks have kept their monetary foot on the gas pedal and floored it for seven years straight. Governments around the world, including in the US, despite all the hoopla about “austerity,” have piled on historic amounts of debt at dizzying rates in the greatest global stimulus package of all times.

And yet, the US economy might be dropping below stall speed, with employment showing signs of deterioration, while asset prices, after seven years of “wealth effect,” are teetering precariously at ludicrous heights. The risks that the Fed promised it would banish from the globe are suddenly returning with a vengeance.

So when will the data stop raining on the parade? Read… Oops, Atlanta Fed’s GDP Forecast Suddenly Plunges