Yves here. While I agree with Gaius that the evidence against Exxon looks so strong as to virtually demand a lawsuit from the Department of Justice, it’s a bit early to hang one’s hat on particular legal theories, particularly when they have not been examined in any depth. For instance, as much as a RICO suit seems appealing and Exxon’s behavior looks like racketeering, it is apparently harder (for reasons that are over my pay grade) to prevail in RICO suits than in other types of criminal cases.

Sorry about the long title, but all three pieces of it — the “slam dunk,” the threat to investors, the threat to executives — are important.

Your background. Bernie Sanders and Sheldon Whitehouse in the Senate, and Ted Lieu and Mark DeSaulnier in the House, have called on the Department of Justice to investigate ExxonMobil for possibly perpetrating fraud, and if warranted, launch a RICO investigation of the company (and other fossil fuel companies) similar to the tobacco industry lawsuit it launched, and won, more than a decade ago. In addition, four House members including Ted Lieu have also called on the SEC to investigate Exxon for fraud, perhaps under the Sarbanes-Oxley law.

“I am writing regarding a potential instance of corporate fraud – behavior that may qualify as a violation of federal law.”

I’ve written about this a number of times, as have others, notably Bill McKibben. Here I want to look at what a set of investigations might mean. My source is this piece from Seeking Alpha, an investor-oriented site. At the end, I’ve appended a request for our Democratic candidates for president in the form of a speech I’d like one of them to give.

A “Slam Dunk” to Win

The first point from my headline is this: So many damaging Exxon documents have already been made public, that according to Seeking Alpha, a Department of Justice lawsuit would be a “slam dunk” to win. Duane Bair at Seeking Alpha:

On October 20, 2015, Vermont Senator Bernard Sanders sent a letter to Attorney General Loretta Lynch asking the Department of Justice to investigate allegations made public through an in-depth expose by InsideClimate News. The Pulitzer Prize winning group is dedicated to providing objective facts regarding the debate around energy and climate change. The reporters spoke with hundreds of former Exxon scientists and executives, combed through thousands of pages of scientific studies and thousands of in-house memos. Their findings are astonishing. […]

Here Bair details why those findings are “astonishing.” I urge you to click through if you want a fast summary of the extend of the wrong done by Exxon executives, and how far back that wrong-doing goes.

After detailing the many ways this lawsuit would be identical to the tobacco case — the comparison, as Bair lays it out, is striking — he then concludes (my emphasis):

If the DOJ opts to take up the case, as Senator Sanders and several members of Congress have suggested they do, it would appear to be a slam dunk case for the Justice Department.

At this point, it would be almost corrupt (though not in the money sense) for the Justice Department not to investigate.

A Threat to Investors

My second point from the headline is this: As much as a RICO lawsuit would threaten the reputation of all fossil fuel companies (and it would) — and be a true game-changer in the climate debate (it would be that too) — a RICO suit could also destroy the companies’ stock valuations. If that’s not a threat to investors, I don’t know what is.

Now remember the rule about collapses — once they start, they often happen quickly. In addition to the four charts at the top of this piece, I could have shown any number of stock market collapses. In 1933, you could have bought a typical S&P stock for pennies on the dollar, but then you’d have to wait until after Eisenhower was elected president, a full generation, for the price to recover.

The problem with a stock collapse in the carbon industry is that prices may never recover. After all, carbon extraction is a doomed industry. Yes, we’ll need carbon for energy for a while, but that while needs to be as short as possible. One of the consequences of a RICO investigation would be that while the suit is going on, its investors are looking at loss of value.

For investors, this [a RICO lawsuit] is a material concern. The cost of defending against a federal investigation will weigh down earnings, distract management and cause public outcry. In the light of a presidential campaign, the intense media attention should be taken seriously. Despite the remaining wide use of tobacco products, American tobacco companies have never recovered from the years of litigation and class action lawsuits. That industry is in a slow decline. If Bernie Sanders has his way, the same fate is imminent for Exxon Mobil.

If investors won’t risk their money buying carbon stock; if the industry’s stock prices fall precipitously; if there’s an accelerated demand for a replacement (again, renewables) whose investment price is deemed likely to rise — how is any of that not good?

And if that weren’t enough of an incentive to force this legal action, there’s more.

A Threat to Executives

A final point, one that’s not made by the Seeking Alpha article but that has to be considered. The Sarbanes-Oxley law makes corporate executives personally and criminally liable for fraudulent statements on annual and quarterly reports that go out under their signature. The value of corporate assets — including, in the case of the carbon industry, its oil, gas and coal reserves — is part of every annual statement. If a corporation knows, for example, that climate change will inevitably “strand” (render valueless) a large percentages of those assets, and yet misdeclares and knowingly overvalues those assets … well, that sounds like investor fraud to me. 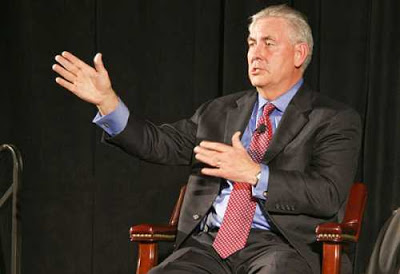 Could this man, Rex Tillerson, Exxon CEO, go to jail for committing criminal fraud under Sarbanes-Oxley? If he’s guilty, should he?

Once a Sarbanes-Oxley investigate starts, especially in the roiling climate of a RICO investigation, you may see not just price chaos, but CEO chaos as well — by which I mean the chaos of CEOs mounting their corporate jets for Switzerland, family and numbered bank accounts in hand.

It’s going to take force, not discussion, to end the death grip of the carbon industry, and lawsuits are force. Just ask the tobacco industry.

Look, this business has to die, selling carbon as fuel, and at the fastest possible rate. To ensure the best possible future for ourselves and our children, we need to switch to 100% renewable energy starting now and at a WWII “wartime production” pace. Yet this industry is so wealthy and so “connected” — after all, both Obama and Clinton have supported more extraction, even while speaking against it — that its executives will not stand down, will not stop, until they are forced to.

This is the crucial question, isn’t it? Are we willing to force them to stand down? Many of us are; perhaps many of you are as well. If so, god and the U.S. criminal code has given us an incredibly powerful tool. The tool is, in fact, so powerful that on consideration, I fully understand why Loretta Lynch and Barack Obama may be afraid to use it. Given what’s been revealed about Exxon already, a RICO suit against the big carbon companies would be a slam dunk.

I’d bet money that the government is afraid to use it … precisely because it would work.

A Call to Democratic Presidential Candidates

So I make this appeal. If any pro-climate Democratic presidential candidate makes the following statement, she or he would be greeted as a hero by the large majority of the country that is actually starting to see the problem clearly. Here’s the statement, as plainly as I can write it, as a series of easy-to-digest bullet points:

▪ If I am elected, I will immediately appoint an Attorney General who will open a RICO investigation into the fossil fuel industry. I do not need Congress to give me permission. Investigating fraud under the U.S. criminal code is the job of the Justice Department, and I will appoint only someone who will do that job, starting on day one.

▪ In addition, if I am elected, and if it is determined that the fossil fuel industry has violated the corporate fraud law known as Sarbanes-Oxley, I will see that law enforced, even against the executives themselves, to the extent the law provides.

▪ Why will I do this? Because as president I’m sworn to enforce the law. It is my duty, and if you elect me to this office, I will do the duties of the office, all of them, in a responsible manner.

▪ But there’s more. I am also doing this because I have children and grandchildren. Many of you have children and grandchildren as well. Almost every climate scientist on earth is telling us that we are facing an emergency unlike any our species has ever encountered. Many of you, a great many of you, are coming to that realization as well. It’s a simple fact. We see it every day. This planet, our home, is becoming less and less habitable. That degradation has to stop, and it will only stop when we stop emitting carbon into the air. It’s that simple … that easy.

▪ So I am doing my part, and I will do more. I have a duty, we all have a duty, to our children and grandchildren, to leave the planet as habitable as it was when we, your generation and my generation, were born into it.

▪ That is also the duty and the goal of your government, to protect our common inheritance, and I will aggressively pursue that goal with every tool of the executive branch.

You have my word.

It’s a simple thing to say, grounded in both simple truths and simple next-step actions. Giving some form of the above speech is almost a no-brainer, assuming a presidential candidate who “gets it” about carbon and the climate. Here’s what our future looks like if we don’t act.

Atmospheric CO2 for the last 450 million years. Over these time frames, CO2 tracks to average planetary temperature. For most of this period the earth has been hot. The genus Homo is less than three million years old. At no point in our past as a species was CO2 higher than it is today, at 400 ppm. The projected spike in CO2 at the far right correlates to about +7°C warming in a “business as usual” scenario. How warm would you like our planet to become? (source; click to enlarge)

Mr. Sanders, Mr. O’Malley, Ms.Clinton — are you ready to defend the future of our children? Feel free to make this speech on the first day it makes sense to do so.

(If you would like to add your name to a “Prosecute Exxon” petition, click here. Blue America has endorsed Bernie Sanders for president. If you like, you can help him here; adjust the split any way you wish at the link.)