One of the long standing patterns in economies showing economic growth is longer life spans, and falls are see the result of severe distress and dislocation, as took place in the period right after the fall of the Soviet Union, when the expectancies of adult men fell by over seven years.

The US has just become the first country to approach this appalling record. A stark warning about the level of distress in America comes from an important study by Angus Deaton, the 2015 Nobel prize winner in economics, and his wife Anne Case. We’ve embedded their short and readable article at the end of this post. The authors found that from 1999 to 2013, the death rate among non-Hispanic whites aged 45 to 54 with a high school education or less rose, while it fell in other age and ethnic groups. This is an HIV-level silent epidemic: AIDS killed an estimated 650,000 from the mid-1980s to present, while an estimated close to half-million died in half that time period who would have lived had their mortality rates fallen in line with the rest of the population. It is hard to overstate the significance of these findings. From the New York Times:

“It is difficult to find modern settings with survival losses of this magnitude,” wrote two Dartmouth economists, Ellen Meara and Jonathan S. Skinner, in a commentary to the Deaton-Case analysis that was published in Proceedings of the National Academy of Sciences.

This cross-country comparison from the study shows how extreme an outlier these middle aged whites are: 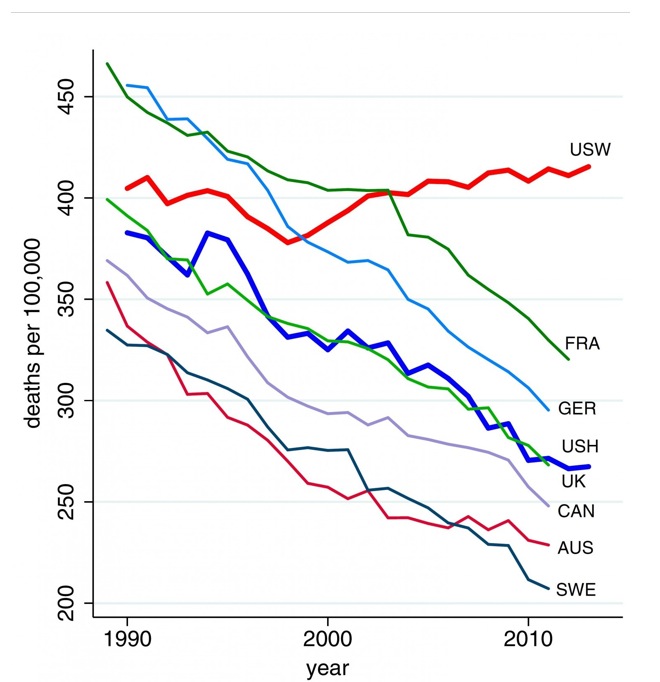 The big culprits are linked to despair, namely “poisoning” which is opioid abuse first and alcoholism second, and suicides. Case and Deaton dug into the underlying statistics, and found distressingly high levels of pain and impaired health in this age group, so pain and physical impairment may well be bigger culprits than economic distress: 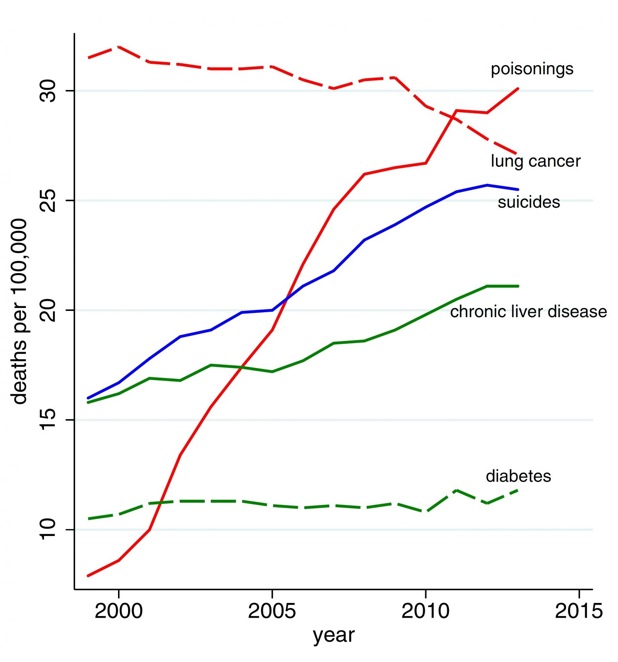 And the rise in death rates took place among men and women, in all of the four major regions of the country the authors examined, and obesity rates were not a driving factor.

And unlike chaotic post-Soviet Russia, the US does not have a good excuse as to why this has been happening in a period of supposed growth, and even worse, with no one noticing until now. Yes, there have been warning signs of distress, such as the fact that US life expectancy has stopped rising, that death rates among white women had risen (and over the same time period examined in the Case-Deaton study), and that the US is alone among developed countries in having an increasing maternal mortality rate. And even though the chattering classes may not have been aware of the rise in the death rate of whites, it had been troubling researchers for some time. Again from the New York Times:

The analysis by Dr. Deaton and Dr. Case may offer the most rigorous evidence to date of both the causes and implications of a development that has been puzzling demographers in recent years: the declining health and fortunes of poorly educated American whites. In middle age, they are dying at such a high rate that they are increasing the death rate for the entire group of middle-aged white Americans…

“Wow,” said Samuel Preston, a professor of sociology at the University of Pennsylvania and an expert on mortality trends and the health of populations, who was not involved in the research. “This is a vivid indication that something is awry in these American households.”

But what is telling about the major news reports on the Case-Deaton study, and is similar to the earlier reports I read on the rise in death rates among white women, which when you drilled into the data turned out to be rural white women, is there are none of the usual anecdotes accompanying these stories. The reporters either could not find, or could not be bothered to find, flesh and blood examples of the acute distress that has been, and remains, invisible to the elites of this country. Indeed, the Washington Post almost goes out of its way to depersonalize what is happening. The headline to its story reads, A group of middle-aged whites in the U.S. is dying at a startling rate. Um “groups” do not die, unless they form a suicide pact. Individuals die.

Similarly, the earlier study on deaths of white women and this study stress the big role that Oxy-Contin and other opioids play, as well as alcohol abuse. But the look at the morbidity figures suggests that a significant part of this population is already in poor health, raising the question of what came first, the pain or the substance abuse. From the report:

Increases in midlife mortality are paralleled by increases in self-reported midlife morbidity….The increase in reports of poor health among those in midlife was matched by increased reports of pain. Rows 4–7 of Table 2 present the fraction reporting neck pain, facial pain, chronic joint pain, and sciatica. One in three white non-Hispanics aged 45–54 reported chronic joint pain in the 2011–2013 period; one in five reported neck pain; and one in seven reported sciatica. Reports of all four types of pain increased significantly between 1997−1999 and 2011−2013….

The epidemic of pain which the opioids were designed to treat is real enough, although the data here cannot establish whether the increase in opioid use or the increase in pain came first. Both
increased rapidly after the mid-1990s. Pain prevalence might have been even higher without the drugs, although long-term opioid use may exacerbate pain for some (26), and consensus on the effectiveness and risks of long-term opioid use has been hampered by lack of research evidence (27). Pain is also a risk
factor for suicide (28). Increased alcohol abuse and suicides are likely symptoms of the same underlying epidemic (18, 19, 29), and have increased alongside it, both temporally and spatially.

Although the epidemic of pain, suicide, and drug overdoses preceded the financial crisis, ties to economic insecurity are possible. After the productivity slowdown in the early 1970s, and with widening income inequality, many of the baby-boom generation are the first to find, in midlife, that they will not be better off than were their parents. Growth in real median earnings has been slow for this
group, especially those with only a high school education. However, the productivity slowdown is common to many rich countries, some of which have seen even slower growth in median earnings than the United States, yet none have had the same mortality experience (lanekenworthy.net/shared-prosperity and ref. 30). The United States has moved primarily to defined-contribution pension plans with associated stock market risk, whereas, in Europe, defined-benefit pensions are still the norm. Future financial insecurity may weigh more heavily on US workers, if they perceive stock market risk harder to manage than earnings risk, or if they have contributed inadequately to defined-contribution plans (31).

As an aside, the data pain and other indicators of diminished functioning (difficulties in standing, walking, climbing stairs; resulting limited social activities) suggest that the rise in Social Security disability claims are not entirely, and may not even be significantly, abuses of the system, but reflect a heretofore unrecognized deterioration in the health of a significant number of Americans.

I wonder if readers can help fill in the gap in these news stories, in terms of the lack of a picture of the people in this group. One of my sister-in-law fits the profile. She has only a high school degree, is now in her early 50s, and lives in a town of about 12,000, population down from a peak of 15,000, in the Upper Peninsula of Michigan, where the biggest local employer is a paper mill where my brother works. She was in good health when she was young, but had a bad reaction to medications she took after having a minor procedure. She became severely allergic as a result and I am convinced this is not hypochondria (as in I’ve seen her eat things that it turns out were problematic and watched her turn green). She can eat only a very limited diet and often has back pain (although she sees chiropractors rather than taking meds). She’s in the emergency room several times a year and seems to have little social life outside her family (she does have family members in the area). Even though she is upbeat much of the time, there is no way she could work; she seems to be incapacitated at least a day a month. I think her condition would be far more desperate if my brother did not have a decent medical plan, but since it is being crapified and she is not getting any healthier, it’s not clear if she will continue to get the same level of medical attention as she has till now. Plus the mill, which was formerly world class, has been badly mismanaged by private equity firms, starting with Cerberus, who installed no-nothing highly paid CEOs and stinted on maintenance, a cardinal sin in a capital-intensive environment. My brother worries they will break the union in two years, which will make working conditions intolerable (they are already much worse than they used to be) but I don’t see how he can begin to afford his wife’s medical care on Obamacare, particularly on an income lower than he has now.

Any other observations about this telling state of affairs very much appreciated. This is a shameful testament as to what America is becoming, and it is very unlikely that the right people will be ashamed.