Chomsky was right, researchers find: We do have a ‘grammar’ in our head MedicalXpress (Robert M)

What Happens If Someone Uses This DIY Gene Hacking Kit to Make Mutant Bacteria? Motherboard (resilc)

Finland Plans to Give Every Citizen, Rich or Poor, $870 a Month TakePart

Front National’s election triumph leaves mainstream parties reeling Guardian. This is not getting the attention in the US that it warrants.

But, as CER’s Tilford points out, “the politics have been moving in a worrying direction for a long time.” Unless something changes the direction of travel, it’s only a matter of time before Europe’s pivotal economy and body politic finds itself ruled by a motley bunch of neo-, crypto- and quasi-fascists absolutely irreconcilable with Europe’s current status quo.

ISIL/ Daesh can be Starved of Oil Revenue: Here’s How Juan Cole (resilc)

The Isis papers: leaked documents show how Isis is building its state Guardian

The unavowable project for a pseudo-Kurdistan Voltairenet (Bob V)

How the DEA invented “narco-terrorism” Vox. Resilc: “It’s sort of like a NPR fund raiser for the narcs at DEA.”

When Will Iowa Republicans Make Up Their Minds? Bloomberg

Donald Trump Call For US Ban On Muslims Could Hurt His Own Mideast Business Deals, Cost Him Millions International Business Times. Headline weirdly fails to make the real point: Trump is perfectly happy to do business with rich Muslims, even ones in countries that the US has singled out as bad actors on the terrorism front. So is it convenient for him to turn on them now because oil is cheap and many of the oil barons are selling rather than buying right now?

Hillary Clinton: How I’d Rein In Wall Street New York Times. Have your barf bag nearby. And notice the difference in the comments from “All” versus “NYT Picks”

Sanders Really Has a Workable Plan to Deal with Climate Change: Rare Among Politicians Ring of Fire (furzy mouse)

Coarsening the Culture: Republicans Need To Do Some Housecleaning Washington Monthly

Sticking to Our Guns New York Review of Books

Jeb Bush, who purged thousands of innocent voters from the Florida rolls, thinks the no-fly list is too error-ridden to screen gun buyers. New Republic

Economist’s Criticism of Federal Reserve Policies Gains Ground New York Times. Um, we’ve been linking to economists who have been saying this sort of thing for years.

From “Leading the Way” to “Losing its Way”: CalPERS Andrew Silton. Important. Silton is the former Chief Investment Officer for North Carolina and therefore a particularly well informed commentator. Silton has also been producing more intense, edgy looking art since he’s been following CalPERS. Hope he regards that as a plus, or at least a useful expansion of his range.

A Revolving Door Helps Big Banks’ Quiet Campaign to Muscle Out Fannie and Freddie Gretchen Morgenson. Great reporting. I need to write a post on the policy issues on Fannie/Freddie “reform”…

Aging, real rates, and labour bargaining power: the case of Japan FTAlphaville. This is important, and I have to confess to having only skimmed it as 6:00 AM, so I hope readers will give this a serious look and pipe up in comments.

Antidote du jour. From The nine lives of Russia’s Hermitage cats. The Hermitage is one of those sites you really must see if you can arrange it. Not only is the art astonishing (and I’m pretty jaded on that front) but so are the places themselves (and I’ve seen a few of them too). It goes a very long way in explaining why Russia had a revolution. 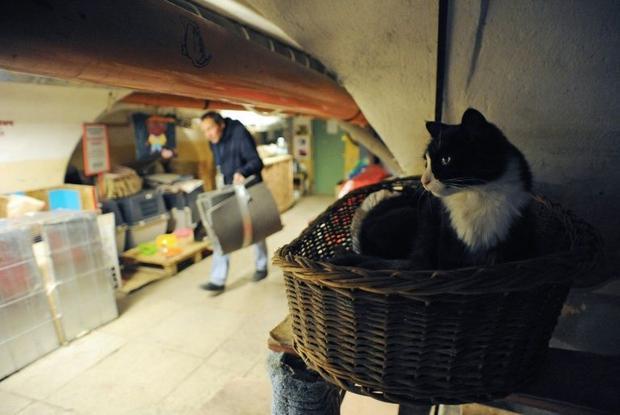