Yves here. The wee problem with this analysis, as useful as it is, is that it ignores the significance of assets held in secrecy jurisdiction, which Gabriel Zucman estimates at a whopping 6% of world GDP.

The concentration of personal wealth has received a lot of attention since the publication of Thomas Piketty’s Capital in the 21st Century. This column investigates the UK and finds wealth distribution to be highly concentrated. The data seem to suggest that the top wealth share has increased in the UK over the first decade of this century.

The concentration of personal wealth is now receiving a great deal of attention after having been neglected for many years. The much discussed book by Thomas Piketty, Capital in the 21st Century, stirred up an astounding debate across the world due to his dystopic vision of a future world where wealth will be more and more concentrated within the hands of a small elite that will perpetrate its own power by passing on enormous fortunes and advantages to the select few of the following generation.

Piketty urged governments to take steps to prevent this from happening. As argued by Ravi Kanbur and Joseph Stiglitz in a recent Vox column (Kanbur and Stiglitz 2015), the increase in wealth we observe nowadays stems in part from the increase in rents which “once created will provide further resources for rentiers to lobby the political system to maintain and further increase rents”. The surge of interest in wealth distribution is additionally justified by the recognition that, in seeking to understand the determinants of rising income inequality, we need to look not only at wages and earned income but also at income from capital, particularly at the top of the distribution.1

But how much do we actually know about wealth concentration at the top and how it is changing today? In a new paper (Alvaredo et al. 2015), we look at the UK – a country where the wealth distribution has long been studied – and ask three questions:

• What is the share of total personal wealth that is owned by the top 1%?
• Is wealth much more unequally distributed at the top than income?
• How far is wealth concentration increasing in the 21st century?

Our central theme is that there are different sources of evidence about wealth concentration, each with strengths and weaknesses. To some extent they tell similar stories, but there are also key differences, and these differences explain in part the reasons why the subject has given rise to controversy.

First of all, the administrative tax data on estates at death can indirectly provide evidence about the wealth of living individuals, by which we mean the value of the total assets owned by individuals, net of their debts.2 This is achieved by applying (the inverse of) mortality multipliers differentiated by age, sex and wealth class. These data provide unique coverage of the wealth holders at the top but tax data are also affected by tax evasion and avoidance and the estate-based estimates rests on the reliability of the multipliers.

In the UK, the official HMRC Series C was estimated using the estate multiplier approach, up until 2005. The share of the top 1% is shown in Figure 1. In 2005 the series was replaced by a new data series focusing exclusively on the identified wealth (note that only estates submitting an inheritance tax return are captured – estates of low value are generally excluded, as well as those held in trusts or in joint names passing to a surviving spouse or civil partner).3 In particular, adjustments were no longer made for excluded wealth, for inappropriate valuations, and to a balance sheet basis. The estimates labelled ‘derived from HMRC new series’ in Figure 1 show a smaller top wealth share for the period of overlap. 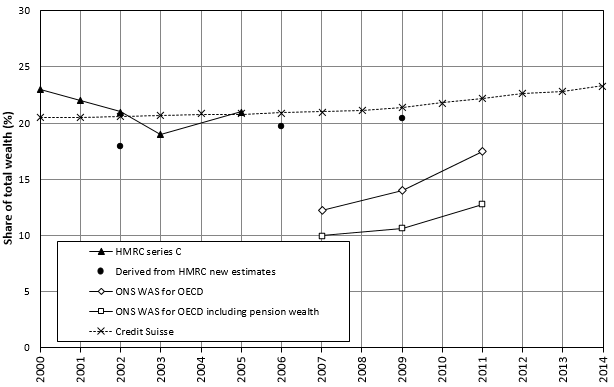 Note: the WAS estimates relate to households and to Great Britain.

These UK estate-based estimates indicate that the distribution of wealth is highly concentrated. The top 1% own between one fifth and one quarter of total personal wealth. Second, the share of the top 1% in total net worth (of individuals) is around double the share of the top 1% (again, of individuals) in total net income (income after deducting income tax), which in the first half of the 2000s was around 10%.4 Thirdly, there is some indication that the top shares in wealth were increasing between 2001-2003 and 2008-2010.

A quite different approach is to multiply up investment income reported in income tax returns to give an estimate of the underlying wealth. The investment income method, like the estate method, has a long history and was investigated extensively in the UK in Atkinson and Harrison (1978). Use of the method has been revived in the US by Saez and Zucman (2014). They apply yield multipliers, differentiated by asset class, to administrative tax data on different types of investment income in order to estimate the wealth holdings. We are exploring the possible use in the UK of either their method or that adopted in the 1970s by Atkinson and Harrison. However, it requires more detailed information than is currently publicly available either on investment income by category or on the classification of assets by types.

Representative household surveys can provide direct evidence of personal wealth within the population. Figure 1 shows the estimated share of the top 1% for Great Britain (i.e. the UK excluding Northern Ireland) based on the Wealth and Assets Survey as supplied to the OECD by the ONS. These shares differ from those obtained using the estate data in that they relate to household wealth (rather than individual wealth), and are shown including and excluding pension rights.

The first finding is that, in the case of the overlapping period 2008-2010, the Wealth and Assets Survey estimates excluding pension wealth suggest a share of the top 1% that is considerably below the estate-based estimates: 14% for the top 1%, compared with 20%. These estimates are household-based and the geographic coverage differs, but the difference is larger than could be explained in this way. One has to ask how far the top shares may be under-estimated as a result of differential non-response to the household survey. The response rate to the first wave was 55%. It is also the case that business assets were excluded from the Wealth and Assets Survey estimates of total wealth, an omission that is likely to be particularly important in the upper wealth ranges.

The second finding is that the household survey-based estimates supplied by the ONS to the OECD show a distinct upward trend. The share of the top 1% in 2010-2012 is 2.7 percentage points higher than in 2006-2008 when measured including pension wealth, and the increase is nearly double (5.3 percentage points) for the estimates excluding pension wealth. Such a striking conclusion needs to be investigated further.

Combined with the Rich Lists

Lists of large wealth-holders, such as the Forbes List of Billionaires or the Sunday Times Rich List for the UK, can also provide useful estimates for the share of total wealth owned by the wealthiest individuals. The rich lists provide information on the shape of the upper tail of the wealth distribution that allows for a more detailed investigation of the distribution within the top one percent. To date, official estimates of wealth concentration have not shown shares for groups smaller than the top one percent. The Sunday Times Rich List for 2010, for example, has 1,000 people with £335.5 billion. These make up 0.004 per cent of total Great British households and 5.3% of total Wealth and Assets Survey non-pension wealth. However, such data do not necessarily guarantee the representativeness of the sample and often use different definitions of units of analysis as well as geographical coverage of wealth holdings.

There are in addition synthetic estimates that draw on two or more sources, carried out by Davies and Shorrocks in the estimates they have prepared for Credit Suisse (Credit Suisse Research Institute 2014). In effect, they use the total number of UK billionaires (but not their wealth) reported in the Forbes list to fit a Pareto distribution. The changing number of billionaires drives the year-to-year changes shown in Figure 1 (the dashed series), since the distribution is otherwise based on the Wealth and Assets Survey 2006-2008. As may be seen, their estimates suggest that the share of the top 1% is close to the estate-based estimates, and the share has increased by some 3 percentage points over the period 2000-2014.

Wealth distribution is often highly concentrated and the UK is clearly no exception. The estate-based estimates certainly suggest that individually held wealth is more concentrated than individual gross incomes. Moreover, our estimates provide some support for the view that the top wealth share increased in the UK over the first decade of the present century.

However, the evidence about the UK distribution of wealth post-2000 is far from complete. Significant investment is necessary if we are to provide satisfactory answers for the UK to the three questions with which we began. There needs to be a re-examination of the estate method in the light of 21st century circumstances. HMRC estate-based estimates should be continued and improved and data need to be made available to allow use of the investment income method to be properly assessed. There also needs to be a reconciliation of the differing pictures shown by the estate estimates and household surveys regarding top wealth-holdings, and the potential of rich lists can be more fully exploited.