We have written a great deal about the role of Ireland and the Irish Financial Services Centre (IFSC) and its role as an offshore haven, posing risks not just for tax but for global financial stability too. As Prof. Jim Stewart and others have pointed out: Ireland played an important role in the global financial crisis that emerged in 2007, and in the aftershocks, under a spectacularly tax haven mentality.

Now an excellent piece of digging by two Bloomberg reporters, Donal Griffin and Joe Brennan, takes the story forwards with a tale about Vneshprombank Ltd., a Moscow financial institution that has just had its banking licence revoked after Russian regulators found a $2.5 billion hole in its balance sheet, and a related Irish special purpose vehicle called VPB Funding Ltd.

“The Irish capital, home of Europe’s costliest banking meltdown, remains a hub for the sort of opaque operations that contributed to the global financial crisis, threatening risks that policy makers are seeking to stamp out.

“There’s concern that Irish SPVs are exporting risk to other financial systems around the world and could have contagion effects,’’ said Shaen Corbet, a lecturer in finance at Dublin City University.“

This Bloomberg graph underlines the point: 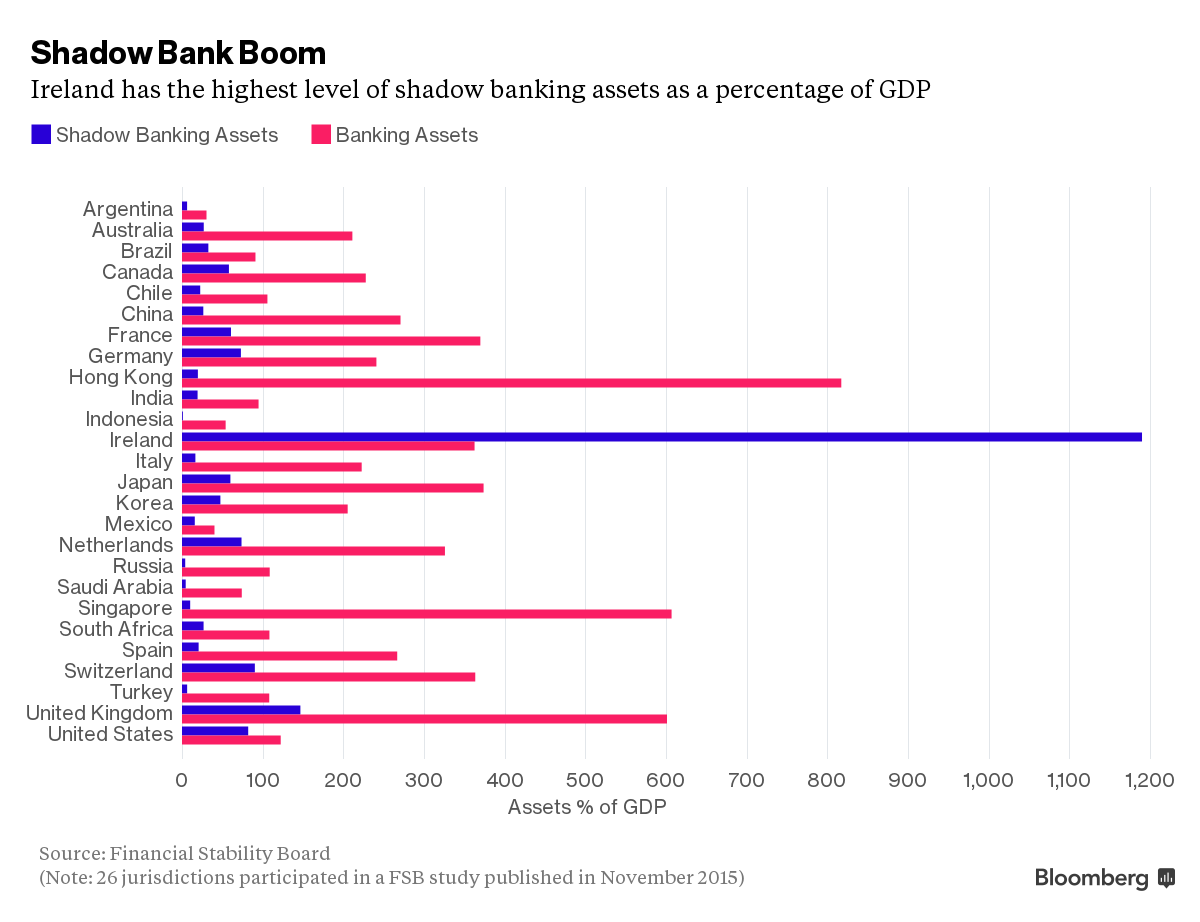 Risky? Well, the shadow-banking system — including hedge funds, mutual funds and insurers — is more than 10 times the size of the Irish economy. Bloomberg:

“Risks may be building up in the part of the shadow-banking sector for which a statistical breakdown is not readily available,” the European Central Bank, the euro-area’s banking supervisor, said in an e-mailed response to questions.

The story cites Ireland’s central bank as saying that all prospectuses are subject to a “robust approval process.” In 2013 the Irish Times reported that only two employees oversee this entire industry. Let’s hope they’ve tightened up since then.

…we don’t do brass plate companies in our country.

Do tell that to all the losers.

The tale of how the IFSC grew up as an offshore financial centre is one of hubris, greed and of course that old favourite of the Irish political establishment, corruption. See here for the full sordid tale. One snippet from that account:

“All this has been accompanied by a culture of corruption so shameless and spectacular that it makes Dublin look like Kabul. The former prime minister Charles Haughey stole €250,000 from a fund set up to pay for a liver transplant for one of his closest friends. . . . as O’Toole points out, bribery, tax evasion and false evidence under oath have not simply gone unpunished; the very idea of penalising the culprits is viewed by the governing elite as unsporting or even unpatriotic.”

And that’s the offshore attitude right there in those last two words. We like the money, it’s good for us — and we don’t give a damn who else gets hurt.