Yves here. It’s not hard to see why London’s status as the financial center in its time zone would be at risk in the event of a Brexit. But let me throw out some contrary thoughts for fun.

First, financial markets are networks, and that means there are strong network effects that work against relocalization. While French and German customers might be able to demand that they be served out of Paris and Frankfurt, respectively, would the trading engines necessarily be moved out of the UK? For instance, London was the world’s top center for foreign exchange trading before it joined the European Union or any of its predecessors. Similarly, why would hedge funds, which are domiciled in tax havens, need to move their management teams out of London?

Moreover, the executives in these firms have a big say in how they are managed, and one issue that is seldom discussed is that the UK has much greater depth in private schools. There are already a fair number of banking pros who work on the Continent four or five days a week and live in London because there aren’t enough spaces in the good schools in the country to which they and their competitors are assigned for all their kids to attend. And the wives often prefer London too. So while London would probably suffer some losses in terms of certain types of businesses and operations being moved to the Continent in the event of a Brexit, they may not be as large as the naysayers expect them to be.

Second, it may be that a fair number of British voters don’t like what the dominance of the financial services has done to the British economy, particularly in terms of real estate prices. I suspect many would applaud it if the Russians who’ve bought up swathes of Belgravia, Chelsea, and Kensington were to decamp and turn all those vacnt-most-of-the-year apartments back over to the natives, and that there were fewer people with big City bonuses bidding up housing. This is a point often made by Dean Baker: more affordable housing does not mean let people have cheaper debt, since that just bids up housing prices to an even higher level. It means having real estate become cheaper. So I’d like UK-based readers to chime in: do you see much correlation between those who favor Brexit and those who have come out losers as housing prices have escalated?

Third, as Willem Buiter warned in 2007 and 2008, the UK has the profile of an economy that is at risk of having a banking crisis: small and open with an outsized banking sector. It is thus arguable that the considerable dislocation of a Brexit nevertheless (if it were to shrink the banking sector) would come with the upside of reduced systemic risk, and hence taxpayer downside.

The UK’s competitive edge in financial services is substantial and would be difficult to dislodge. But Brexit could damage London’s attractiveness as the centre of European banking, as an entry point to the EU and as a global financial hub. FDI is also at risk.

London’s strength as a global financial centre is impressive. The British capital has a share of nearly 50% in certain segments of global financial markets. Table 1 shows that the UK hosts 48.9% of the world’s interest rate over-the-counter (OTC) derivatives turnover and 40.9% of foreign exchange (FX) turnover. The UK is also one of the main players in the US equities trades, with 20% of the global market. By contrast, other European countries play only a comparatively small role in global markets: France hosts 7.3% of interest rate OTC derivatives, and 2.8% of FX turnovers. In terms of European markets, the UK and Germany each have a share of more than 20% in the issuance of securitisation. The share of investment fund assets in Europe is 24% for the UK, compared to 22% in France and 17% in Germany.

Recent research has found that the synchronisation of business cycles between the UK and the euro area has increased since the end of the 1990s. Campos and Macchiarelli have recently argued that this probably increases the costs of a potential UK exit from the EU. In a recent paper, we found that the UK credit cycle – measured here as the filtered growth of real bank credit to the private sector – has also become significantly more aligned with the credit cycle of the euro area, particularly since the end of the 1990s (figure 2). This suggests that EU-UK financial linkages have become tighter, although it does not tell us who would suffer the most from the financial consequences of Brexit. We should therefore look more in depth at specific aspects of UK-EU financial integration. 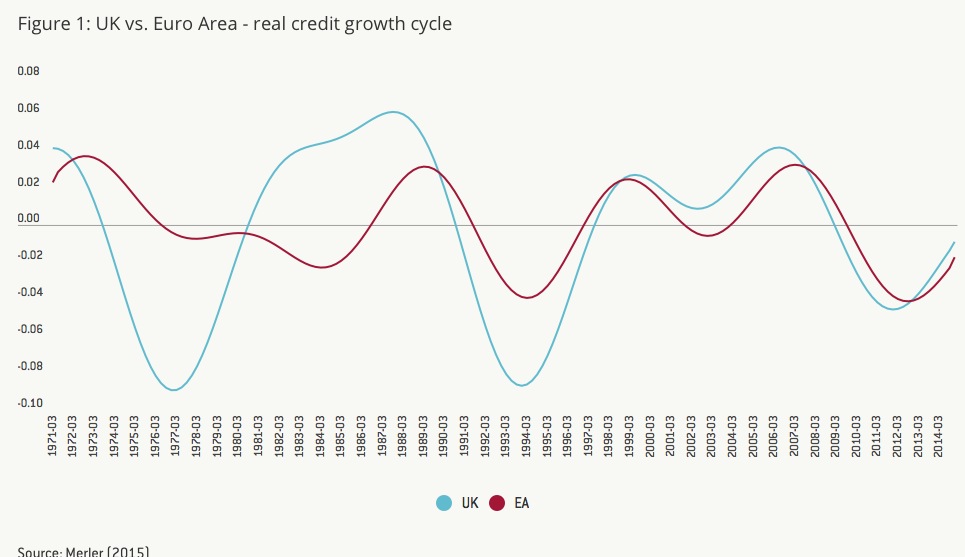 International Integration of the Banking Sector

Turning to cross-border banking, table 2 shows that the banking sector of the euro area consists of 83% domestic banks, 14% banks from other EU countries, and only 3% from third countries. The rate of cross-border integration in the entire EU banking sector is even higher. 16 % of total bank assets are owned by banks based in other EU countries, and 9% by banks from the rest of the world. By contrast, the UK seems to be a special case. It is the only EU country with more claims from banks in the rest of the world (32 %) than from banks headquartered in the rest of the EU (17 %).

This can be explained through the role of major US and Swiss (investment) banks, which use their London offices as a springboard to conduct business across the EU. Indeed, when asked about the importance of EU membership for financial service businesses located in the UK, 49% of high-level professionals from “The City” cited access to EU customers and 46% cited the single regulatory framework for financial services as very important for their own business (see Ipsos Mori poll, 2013). The former is guaranteed through the role of UK authorities in ‘passporting’ banking and other financial services. Currently any firm headquartered in the UK can apply for a passport from the UK regulators to do business in the whole of the European Economic Area. The latter is granted through the European Court of Justice, which is in charge of enforcing single market rules. 84% of respondents said that the best option for the overall competitiveness of the UK as a financial center would be to remain a member of the EU.

Foreign Direct Investment in the UK

Beyond financial services, many European firms invest in the UK in a variety of sectors. When looking at the inward stock of Foreign Direct Investment (FDI), the EU is the biggest FDI investor in the UK, with nearly 500 bn GBP invested in 2014, as opposed to 253 bn GBP invested by the US (figure 3). The FDI investment of European firms is spread across different sectors (figure 4), in 2014 most notably retail and wholesale trade (83.2 bn), mining (67.5 bn), IT (48.7 bn) and financial services (47.5 bn). 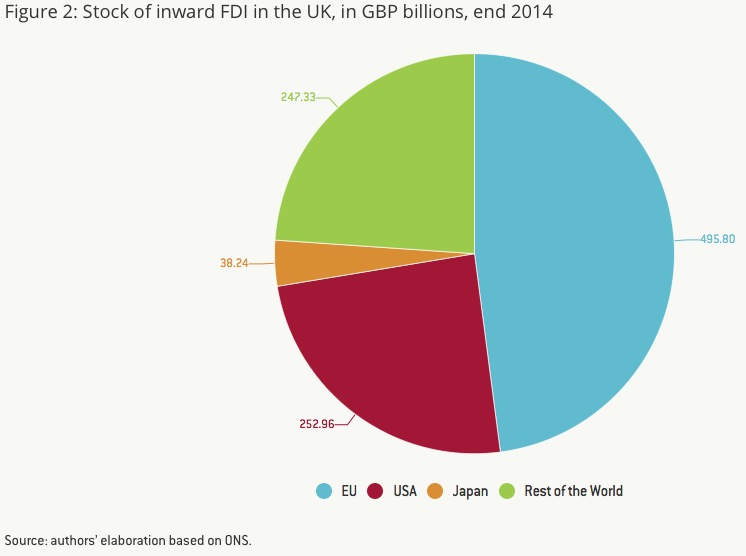 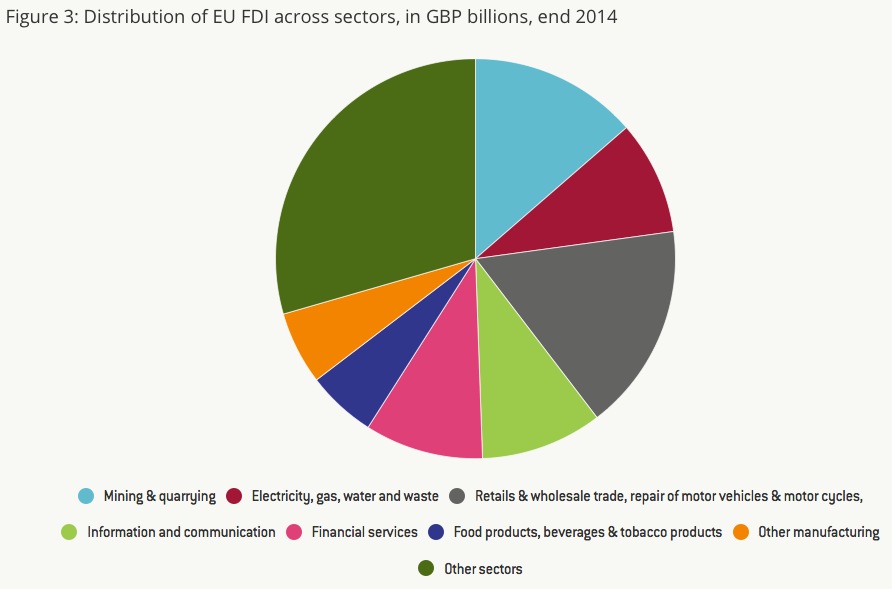 In this context, 415 members of the Confederation of British Industry (CBI) in a survey conducted by YouGov in 2013 also valued the financial aspects of EU membership: 52% of respondents said that the ability to invest in other EU states without restrictions had a positive or very positive impact on their business; 42% said that the ability of their company to attract inward investment from companies based in the EU would be negatively affected by the UK leaving the EU and 32% said that their company’s ability to attract investment from companies based in non-EU countries would be reduced. A sizable 75% of respondents expected that Brexit would have a negative impact on the level of FDI.

If Brexit happens, the advantages of EU membership that businesses appear to consider the most significant could be at risk. The UK’s passporting capacity in financial service might have to be re-negotiated. The UK’s adherence to a single rulebook would also be called into question, as exiting the EU would mean exiting the jurisdiction of the European Court of Justice. However, much would depend on the exact form of EU-UK relationship that was built after Brexit. The UK could opt for a Norwegian-style agreement, and join the European Economic Area (EEA) with full access to the single market. It would then fall under the jurisdiction of the EFTA Court of Justice, which enforces European laws in countries which are part of the EEA, but outside the EU.This would mean adopting regulations and standards without much influence on their development, an awkward situation for the EEA’s preeminent financial centre. Another alternative would be free trade agreements or bilateral agreements, which could guarantee access to the single market in selected sectors while preserving independence in others.

However, the outcome of any negotiations for single market access or shared regulation is uncertain. This uncertainty alone could prove destabilising. Even if a new deal were eventually reached, the confusion surrounding the negotiations would have negative consequences for European firms operating in the UK and might endanger FDI flows to the UK. The attractiveness of London as a global financial hub and springboard to Europe might also suffer.