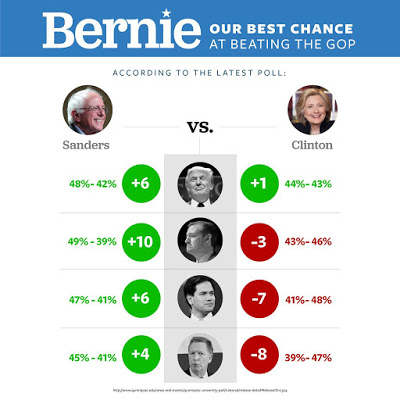 Listen to the first minute and a half of this NPR report? How easy will it be for Hillary Clinton to counter this argument (source)?

We’ve been looking at the electability argument lately, and it doesn’t look good for Clinton if she’s the nominee. Below are the thoughts of one more writer who thinks Democrats shouldn’t take a chance that Clinton can pull out a win against Donald Trump.

But before we get to that, consider. Clinton is beating Bernie Sanders in states that (a) will not go Democratic anyway, or (b) are filled with voters who will always vote Democratic. Sanders is beating Clinton among voters that could easily vote with Trump.

Regarding the latter, consider this, from prior to the Super Tuesday voting:

Nearly 20,000 Bay State Democrats have fled the [Democratic] party this winter, with thousands doing so to join the Republican ranks, according to the state’s top elections official.

Secretary of State William Galvin said more than 16,300 Democrats have shed their party affiliation and become independent voters since Jan. 1, while nearly 3,500 more shifted to the MassGOP ahead of tomorrow’s “Super Tuesday” presidential primary.

Galvin called both “significant” changes that dwarf similar shifts ahead of other primary votes, including in 2000, when some Democrats flocked from the party in order to cast a vote for Sen. John McCain in the GOP primary.

The primary reason? Galvin said his “guess” is simple: “The Trump phenomenon,” a reference to GOP frontrunner Donald Trump, who polls show enjoying a massive lead over rivals Marco Rubio, Ted Cruz and others among Massachusetts Republican voters. …

Now ask yourself — Who retains more of these voters for the Democratic Party, Clinton or Sanders? If you’re having trouble deciding, listen again to the first minute and a half of the audio clip above.

Glenn Greenwald offers his thoughts on the electability risk of nominating Hillary Clinton:

Many Democrats will tell you that there has rarely, if ever, been a more menacing or evil presidential candidate than Donald Trump. “Trump is the most dangerous major candidate for president in memory,” pronounced Vox’s Ezra Klein two weeks ago. With a consensus now emerging that the real estate mogul is the likely GOP nominee, it would stand to reason that the most important factor for many Democrats in choosing their own nominee is electability: meaning, who has the best chance of defeating the GOP Satan in the general election? In light of that, can Democrats really afford to take such a risky gamble by nominating Hillary Clinton?

In virtually every poll, her rival, Bernie Sanders, does better, often much better, in head-to-head match-ups against every possible GOP candidate.

He notes that in most polls, Clinton loses to Cruz, while Sanders beats Cruz in all of them. Then Greenwald turns to Trump:

A similar story is seen in their match-ups against Trump. Although they both end up ahead in most polls, Sanders’ margin over Trump is generally very comfortable, while Clinton’s is smaller. Clinton’s average lead over Trump is just 2.8 percent, while Sanders’ lead is a full 6 points:

Here’s that data in chart form via RealClearPolitics (source is the Greenwald article). First Sanders vs. Trump: 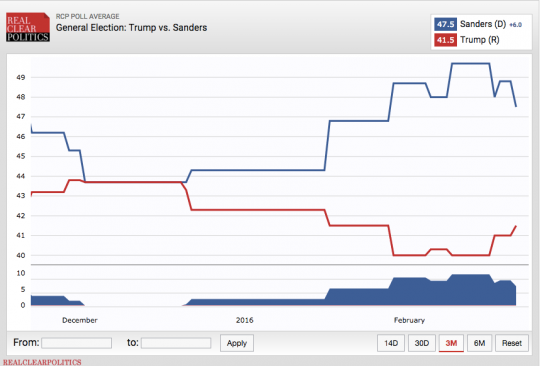 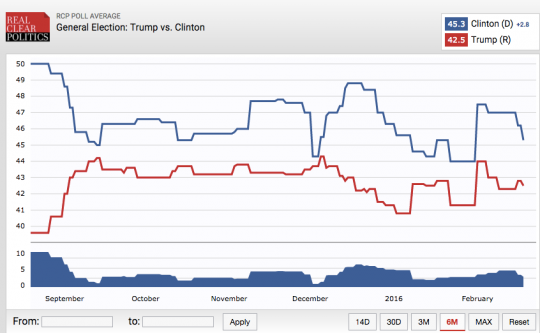 Keep in mind, these results are prior to any head-to-head debates in the general election.

At least one writer thinks Clinton is uniquely vulnerable to Trump in debates, and Sanders is uniquely impervious. Just a snip of this, since I’ll likely return to it:

Clinton’s people are right to point out that these polls [the ones Greenwald mentions above] mean very little; after all, Sanders’s entire campaign success is a caution against placing too much weight on early polling. And they are especially right to emphasize that we should visualize how the campaign by conservatives will realistically play out, rather than attempting to divine the future from highly fallible polling numbers. But it’s precisely when we try to envision how the real dynamics of the campaign will transpire that we see just how disastrous a Clinton-Trump fight will be for Clinton.

Her supporters insist that she has already been “tried and tested” against all the attacks that can be thrown at her. But this is not the case; she has never been subjected to the full brunt of attacks that come in a general presidential election. Bernie Sanders has ignored most tabloid dirt, treating it as a sensationalist distraction from real issues (“Enough with the damned emails!”) But for Donald Trump, sensationalist distractions are the whole game. He will attempt to crucify her. And it is very, very likely that he will succeed.

Trump’s political dominance is highly dependent on his idiosyncratic, audacious method of campaigning. He deals almost entirely in amusing, outrageous, below-the-belt personal attacks, and is skilled at turning public discussions away from the issues and toward personalities (He/she’s a “loser,” “phony,” “nervous,” “hypocrite,” “incompetent.”) If Trump does have to speak about the issues, he makes himself sound foolish, because he doesn’t know very much. Thus he requires the media not to ask him difficult questions, and depends on his opponents’ having personal weaknesses and scandals that he can merrily, mercilessly exploit.

This campaigning style makes Hillary Clinton Donald Trump’s dream opponent. She gives him an endless amount to work with….

Please read the rest; it’s a wake-up call, and includes an interesting faux-Trump speech that, in tone at least, catches his voice perfectly.

The Favorables, the Climate of the Electorate & the Risk

Greenwald closes with the argument from favorables, a look at the unique climate of this election, and the risk of a Democratic loss.

[T]he more the public gets to see of both candidates, the more popular Sanders becomes, and the more unpopular Clinton becomes. …

On the climate of the times:

Then there’s the particular climate of the electorate. While it’s undoubtedly true that racism and ethno-nationalism are significant factors in Trump’s appeal, also quite significant is a pervasive, long-standing contempt for the political establishment, combined with enduring rage at Wall Street and corporate America, which — along with the bipartisan agenda of globalization and free trade — have spawned intense economic suffering and deprivation among a huge number of Americans….

In this type of climate, why would anyone assume that a candidate who is the very embodiment of Globalist Establishment Power (see her new, shiny endorsement from Tony Blair), who is virtually drowning both personally and politically in Wall Street cash, has “electability” in her favor? Maybe one can find reasons
to support a candidate like that. But in this environment, “electability” is most certainly not one of them. Has anyone made a convincing case why someone with those attributes would be a strong candidate in 2016?

People certainly have reasons to support Hillary Clinton, and I understand them. I even agree with some of them. But if electability is the reason, preferring her seems like a risk. If winning is your goal, why take it?

Win with Sanders or Lose with Clinton?

The question I have, and it’s a serious one, is this. If the hard core of the Democratic establishment had to choose between these two results — Win with Sanders or lose with Clinton? — which would they choose?

I honestly can’t say I know. But if they do choose the riskier candidate, they must consider the cost of a Sanders win to be even greater than the cost of a Republican win, or they wouldn’t take the risk.