Yves here. The short answer is “a lot”. This analysis confirms Gabriel Zucman’s estimates on how much in assets is hidden (a mind-boggling 6+% of the total) but estimates the stealth income as much lower than his estimates. Mind you, the amounts not reported are so great that including the estimated losses would make the US look like a far less significant capital importer than it appears to be.

Balance of payments statistics suggest that assets held abroad are greatly underestimated – particularly for mutual fund shares and bank deposits. This column looks into the role played by tax havens and estimates that unreported financial assets amount to between $6 and $7 trillion. On this figure, the related tax evasion is between $19 and $38 billion a year on capital income, and between $2 and $2.6 trillion on personal income. Recent policy initiatives such as automatic information exchanges constitute real progress, but some critical aspects might jeopardise their effectiveness.

Over the last two decades, the growing volume of international financial transactions has allowed more and more taxpayers to escape domestic taxes by hiding their income and wealth abroad, particularly in offshore centres with strict banking and financial secrecy rules. Links and transactions with counterparts and subsidiaries located in tax havens provide individuals and business entities with channels to avoid or evade taxes or to transfer funds abroad.

The geographical breakdown of data reported in external statistics provides evidence of a prominent role of tax havens and offshore financial centres. Statistics on foreign direct investment show that, globally, almost one third of the foreign direct investment stock (inward and outward) refers to partners located in tax havens (UNCTAD 2015). As far as trade in services is concerned, the tax advantages offered by offshore countries have a significant impact on the geographical distribution, especially in the case of business services (Hebous and Johannesen 2015). The results of the most favourable voluntary disclosure schemes confirm that there are significant amounts of undeclared external assets held in tax havens. More generally, the analysis of global data from balance-of-payments statistics and international investment positions reveals that the portfolio liabilities reported globally by debtors are normally higher than the corresponding assets reported by investors of all countries (e.g. Lane and Milesi-Ferretti 2006). As these aggregates should coincide, it is reasonable to infer that the discrepancy stems from the underreporting of portfolio assets held abroad. Since corporations are subject to many regulatory checks (accounting standards, etc.), it is likely that most of the unreported assets belong to households. These hypotheses are the basis of our recent work (Pellegrini et al. 2015) on the hidden offshore wealth of households and tax evasion, which refines and updates our earlier studies (Pellegrini and Tosti 2011, 2012; Sanelli 2008).

In order to estimate a plausible magnitude of the undeclared assets held abroad, we compare the ‘mirror statistics’1 on portfolio assets and liabilities (shares, bonds, and mutual fund shares) on a global level, as taken from the Coordinated Portfolio Investment Survey conducted by the IMF, and assume that measured discrepancies are a proxy of the undeclared external assets. The Coordinated Portfolio Investment Survey does not include other financial assets, among which bank deposits. The amount of undeclared foreign bank deposits held by households may be estimated looking at Bank for International Settlements locational statistics on cross-border deposits of non-bank investors and taking a share2 of these deposits held both ‘in’ tax havens by residents of other countries and in non-haven countries ‘by’ tax haven residents.

For the years 2001-2013, we estimate the global discrepancy between portfolio liabilities and assets (underreporting of assets) to be equal, on average, to 6.4% of world GDP. At end-2013 it amounts to $4.9 trillion. At the same date, undeclared foreign bank deposits may range between $1.2 and $2.3 trillion. The overall amount of unreported financial assets may then be estimated between $6.1 and $7.2 trillion. This amount represents a lower-bound estimate of the potential amount of undeclared wealth held offshore, as it does not include either other possible types of financial assets, such as life insurances or derivatives, or non-financial assets (such as real estate). Overall, the order of magnitude of unreported portfolio assets is not far from that estimated by Zucman (2013, 2015) with a similar methodology – $6.2 trillion for 2013, against our result of $4.9 trillion. The difference is mainly due to a higher amount of equity securities found by Zucman. As for bank deposits, his result is within the range of our estimate.

Table 1. Estimate of under-reporting of external financial assets (trillions of US dollars) 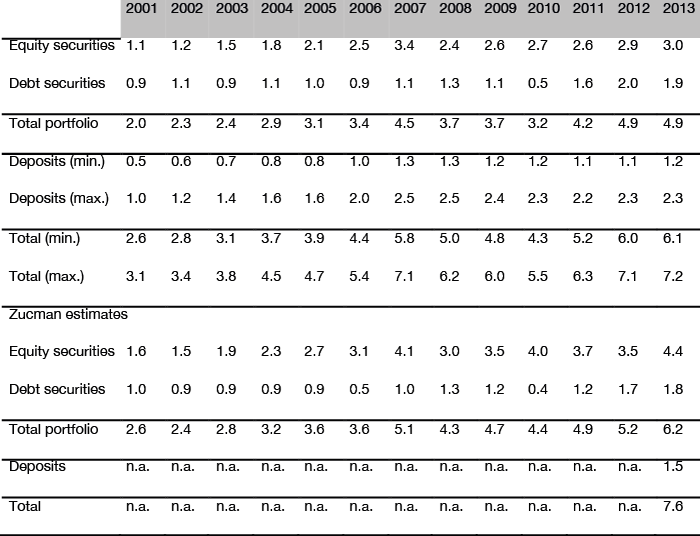 Starting from these results, we estimate the potential amount of international tax evasion linked to the unreported portfolio assets and bank deposits by assuming that most of the assets are held by individuals (either directly or through intermediate controlled entities) and that they give rise both to annual capital income tax evasion (on the basis of given rates of return) and to personal income tax evasion, this latter refers to the income from which the unreported assets originally arose.

According to our estimate, at the global level international tax evasion on capital income might range between $19 and $38 billion a year. Personal income tax evasion estimated with reference to the stock of unreported capital at the end of 2013 ranges between $2 and $2.6 trillion, i.e. between 2.6% and 3.5% of world GDP.

To the best of our knowledge, similar estimates for personal income tax evasion are not available. As regards capital income tax evasion, for 2013 Zucman obtains a value of $127 billion, almost three times our maximum estimate of $44 billion. The difference is mainly due to the assumption of higher rates of return of the unreported assets – Zucman uses a single rate of return equal to 8%, whereas we prudentially use lower rates, differentiated by financial instruments, in the range of 0.5-3.3%. Namely, we calculate yearly interest rates on short-term (or sight) bank deposits by gathering IMF and ECB data (for European countries). For portfolio securities, we estimate actual average rates of return (respectively, in terms of dividends and interest) on the basis of the financial proceeds reported in balance of payments and the correspondent financial assets indicated in international investment positions.

Table 2. Estimate of tax evasion on undeclared external assets (billions of US dollars)

The analysis of external statistics reveals that the amounts of undeclared assets held offshore and of the related international tax gap are significant.

Over the last few years, and namely after the Global Crisis of 2008-2009, unprecedented progress towards automatic information exchange between national tax authorities has been achieved thanks to the US FATCA legislation and the related Intergovernmental Agreements and through the Common Reporting Standard on Automatic Exchange of Information approved at OECD level in 2014. The crucial question is whether automatic information exchange represents an effective tool to fight international tax evasion.

Currently, a majority of countries in the world are committed to implementing automatic information exchange. As a matter of fact, full transparency and full access to information by tax authorities are far from being achieved. The main obstacles to an effective information exchange include, among others, persisting difficulties in the identification of ultimate beneficial owners, lack of reciprocity in many agreements on information exchange (namely, in a number of Intergovernmental Agreements negotiated by the US), problems of timeliness and margins of freedom left to national legislators in the implementation process, and loopholes in the information reporting provisions. In other words, the new measures will probably make tax evasion more difficult for small investors, but not for the bigger and more sophisticated ones who are often able to use complex structures to conceal their wealth abroad (see Zucman 2015, Economist 2015).