The Sanders campaign released a television ad on Friday that skewered Clinton, without naming her, as accepting more than $200,000 from Wall Street for a speech while not embracing raising the minimum wage from the current $7.25 to $15.

It depends on what the definition of `embrace’ is.

If you click on that URL at 6:00 PM, you get a different article: 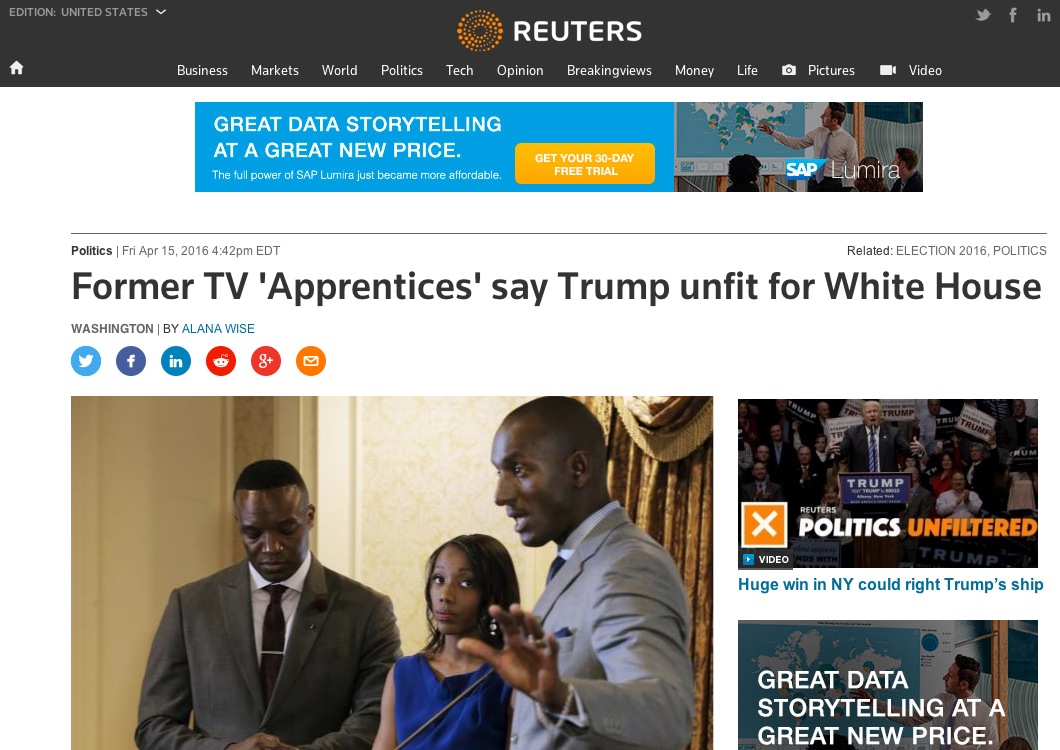 If you Google the headline, you find the article under the Africa and UK site editions (actually it showed as being on the UK site edition when I first Googled but didn’t a while later when I decided to post about it). 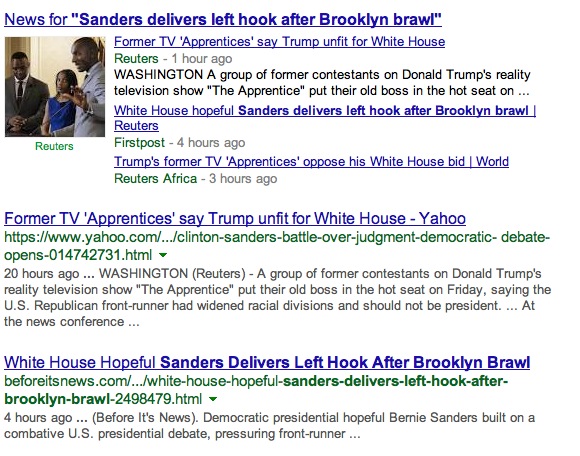 And look at the URL, it is “http://www.reuters.com/article/us-usa-election-democrats-idUSKCN0XC05” as in originally tagged about being about Democrats. Pray tell why a Trump story is there now. And Google also shows the Trump article under the search for the article by title, which also confirms the swap. And the feed-through to Yahoo also seems consistent.

But it’s gone from the Africa edition too:

But you can still find some footprints of the original story:

The Clintons are well known for hectoring the press about unfavorable coverage. Still, it’s stunning to see Reuters cave in to what appears to be pressure from Hillary’s campaign, particularly since Clinton is never named.

Update 2:00 AM. Lambert had the presence of mind to search on text from the article. He found only two matches: one from the Daily Times of Pakistan, which was by “Agencies” and we did not verify whether it contained text from other wire services. (Enterprising reader rufus magister also located a copy at CompuServe Entertainment). However, the other one was from First Post of India with the headline: White House hopeful Sanders delivers left hook after Brooklyn brawl | Reuters. And as you can see below, the article closes with: “This story has not been edited by Firstpost staff and is generated by auto-feed.”

Bear in mind that Reuters routinely updates articles, and labels them as updates. So it would seem to be very unusual for the to yank a story rather than correct it. Full text below:

Sanders and Clinton challenged each other’s judgment and experience in New York’s Brooklyn borough on Thursday night in their most bellicose of nine debates, laying bare the mounting pressures on them both without seeming to change the dynamics of the race.

The Sanders campaign released a television ad on Friday that skewered Clinton, without naming her, as accepting more than $200,000 from Wall Street for a speech while not embracing raising the minimum wage from the current $7.25 to $15.

While far short of the brawls that have characterized Republican debates, the tone reflected a contentious turn in the Democratic contest before Tuesday’s presidential primary in New York. Clinton and Sanders out-shouted each other while a split crowd roared its approval.

“If you’re both screaming at each other, the viewers won’t be able to hear either of you,” moderator Wolf Blitzer of CNN warned during the debate, the latest ahead of the Nov. 8 presidential election.

Republicans were gleeful watching the bitter Democratic debate. “Hillary Clinton was supposed to have the nomination locked up by the end of March, but she’s instead lost seven straight states and is having to throw the kitchen sink at a 74-year old Vermont socialist as her once 60-point lead dwindles,” said Reince Priebus, head of the Republican National Committee.

Sanders, 74, takes a quick break from the campaign trail on Friday to fly to the Vatican to give a brief speech at a conference on the world economy and social justice. Sanders, who will be back in New York to campaign on Sunday, has said the trip is not a political appeal for the Catholic vote but a testament to his admiration for Pope Francis.

At the debate, Clinton said she would sign a bill raising the federal minimum wage to $15 if it came from Congress, but she added that her position would be to follow the upstate New York model of raising it gradually. She defended her advocating for a $12 minimum wage by saying that was the first step in ultimately getting it raised to $15.

Both Republican front-runner Donald Trump and Clinton have big leads in state opinion polls heading into the New York contest. Trump needs a win to further his drive toward the 1,237 delegates needed for the nomination, and avoid a contested July convention that could sow Republican chaos.

Clinton leads Sanders by 251 bound delegates to the July Democratic convention, where 2,383 delegates will be needed for the nomination. A democratic socialist, Sanders has gained in support as a champion of the working class vowing to erase economic inequality.

Sanders, who had questioned the former secretary of state’s qualifications to be president, conceded during the debate she was qualified but said she had shown poor judgment by taking money from Wall Street for speeches, by voting as a U.S. senator to back the 2003 Iraq invasion and by supporting free trade deals.

Clinton, 68, responded the charges were also an attack on President Barack Obama, who as a candidate raised money on Wall Street and utilized Super PACS, outside funding groups that can raise unlimited sums of money, but still fought for tough regulations on the financial services industry.

Pressed on what Clinton had done to show she was influenced by the money she had raised on Wall Street or her speaking fees, Sanders said she was too busy giving speeches to Goldman Sachs to break up the big banks.

“He cannot come up with any example because there is no example,” Clinton replied. “I stood up to the behavior of the banks when I was a senator.”

Sanders responded sarcastically: “Secretary Clinton called them out – oh, they must be really crushed by this.”

This story has not been edited by Firstpost staff and is generated by auto-feed.