Yves here. Richter describes the consequences of turning homes into a financial asset, combined with policies that have neglected job and wage growth.  If you look at his chart, you’ll  see a rise in home ownership during the stagflationary 1970s. That was also financialization of residential real estate. Properties were an inflation hedge, while equities were flagging.

Something happened on the way when the concept of “home” transmogrified to a financialized “asset class” whose price the government, the Fed, and the industry conspire to inflate into the blue sky, no matter what the consequences. And here are the consequences.

The Census Bureau, which has been tracking homeownership rates in its data series going back to 1965 on a non-seasonally adjusted basis, just reported that in the second quarter 2016, the homeownership rate dropped to 62.9%, the lowest point on record.

It matches the low point in Q1 and Q2 of 1965 when the data series began. At no time in between did it ever fall this low. And it was down half a percentage point from 63.4% a year ago.

The relentless slide has lasted for 12 years, from its peak of 69.2% in Q4 2004, which was when the Greenspan Fed’s low interest rates were boosting speculation in the housing sector, and prices were going haywire. At the time, the concept of “home” had already become an asset class that can never lose money, financialized and later shorted by Wall Street, subsidized by government agencies, and backstopped by the Fed.

And this is what happened to homeownership rates afterwards: 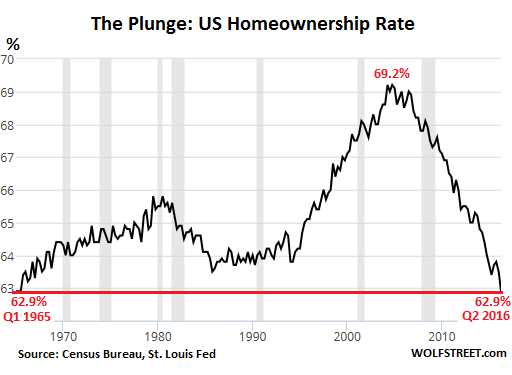 On a seasonally adjusted basis, the homeownership rate dropped to 63.1% in Q2, the lowest in the non-seasonally-adjusted data series going back to 1985.

There are numerous reasons for this, some known and others still to be guessed at, including:

The fact that Housing Bubble 2 in most urban areas is now even more magnificent than the prior housing bubble that blew up with such fanfare, even while real incomes have stagnated for all but the top earners, is a sign that the Fed has succeeded elegantly in pumping up nearly all asset prices to achieve its “wealth effect,” come heck or high water. In this ingenious manner, it has “healed” the housing market.

It’s two-year bout of flip-flopping about raising rates just puts some lipstick on these policies that include the purchase of agency mortgage-backed securities, which the Fed continues to buy to replace those that mature and roll off its balance sheet.

As MBS mature and are redeemed, the Fed takes this money and goes to its primary dealers (list) and buys more of them, which puts downward pressure on mortgage rates and prevents the free market from playing any kind of role, all in the religious believe that inflating home prices beyond all recognition is somehow good for the economy and Wall Street, despite the consequences, such as plunging homeownership rates, as America turns from a country of homeowners into a country of renters, often dwelling in a corporate-owned financialized asset class.