Yves here. We’ve been giving John Helmer more prominent play than usual because he’s had a run of good stories.

I found this one to be intriguing, not because Russian real estate is of inherent interest, but for how Helmer describes the way Russian money is laundered abroad for reinvestment at home, and how various sanctions against Russia and money-laundering crackdowns are blocking the usual funds flows.

Coming soon to a Moscow office building, shopping mall, or warehouse near you, nothing and noone at all.

According to a new report on Russian real estate market conditions through March 31 by the Moscow office of Cushman & Wakefield, the current vacancy rate for Class-A offices is almost 29%; for two-year old shopping centres, 30%; for shopping centres in planning or construction, 40%; and for warehouses, 10%. Every fifth square-metre of existing office space is now vacant – a first in Russian office-building history – and this isn’t expected to change, Cushman & Wakefield are forecasting, for another two to three years.

Everywhere rents are falling, and for the first time ever, landlords desperate for money will accept lease agreements in roubles. New construction is dropping like a stone – so far this year, zero Class-A offices, zero upmarket malls, and almost zero warehouses. The main construction companies are increasingly overdue at the bank – one dollar in five of the loans which real estate developers have borrowed to construct their projects is overdue for repayment. New investment in real estate is thus improbable — unlikely to recover to $4 billion per annum, the level of 2010, for another two years. “No bad news is the best news,” Cushman & Wakefield conclude

Officially, the drivers of demand for commercial real estate investment in Moscow and Russia’s regional centres are consumer demand for shopping; and the supply of capital to finance the building of new offices, shops and warehouses for the supply of goods and services.

Unofficially, the supply of capital to the Russian real estate market depends on how much cash Russian businessmen steal from their businesses and from the state and commercial banks, and then recycle through offshore companies, into real estate investment funds, and then back into Russian real estate, often offices for the very same businesses, shops, and banks from which the cash was stolen in the first place.

For recycle, read launder. Says a Swiss banker, investment funds are “the best way to hide hot money, for once the deposits are pooled, and then combined with loans to finance construction, it is very difficult to retrace the money trail. If there is no Moscow prosecution, there is also no proof of money laundering. The thieves get away with it. In fact, they make 20% or more on their loot.”

The impact of war, sanctions and economic recession has been to chill both the white and black markets. The cost of the black market to the domestic economy can be counted in VAT, corporate and individual income taxes avoided; bribery of state officials; and the loss of capital and dividends which stay offshore. Most experts calculate that sum as not less than the peak annual inflow of investment in Russian commercial real estate: $7.7 billion in 2011, according to Cushman & Wakefield; $7.5 billion in 2012; and $8.1 billion in 2013. Everyone knows; noone talks.

A dozen analysts of the Russian real estate sector’s companies, whose stock is listed on the Moscow and London exchanges, were contacted at their employers, well-known international and Russian banks in Moscow. They either claimed to know nothing about the black market, or refused to answer questions about either the white or black market’s current dynamics. Officials from the Moscow City Duma and the city administration’s property department are mute. Reporters covering the real estate beat at RBC and Forbes have nothing to say off the record. 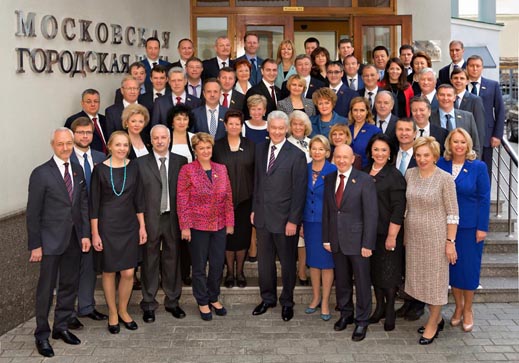 The 45 deputies of the Moscow City Duma at the start of their current 5-year term in September 2014. Their next election is due in September 2019. See: https://duma.mos.ru/en/

According to the new Cushman & Wakefield report, right now Russian consumers have almost run out of cash. “Today 72% of households have absolutely no savings, and together with inflating consumer prices this may lead to further contraction of consumer market.” For the full report, click and read. 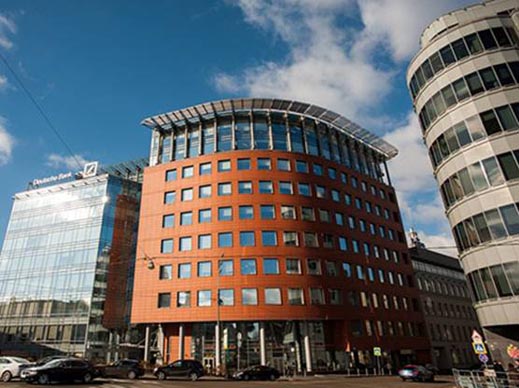 When there is less money to spend, the “footfall” at shopping malls – that’s the average number of customers per month, not necessarily the number of spenders – also drops. In Moscow and St. Petersburg, consumer feet are walking away from most sizes of shopping centres. If Russians drop money in malls, it’s on food and drink, not on durables. For an analysis of the collapse of TsentrObuv, the leading Russian shoe retailer, read this. For what is happening in the fast food and drinks market, read this analysis of Shokoladnitsa, the biggest coffee chain.

To try to lure Muscovites without cash to shift their feet in the mall direction, Cushman & Wakefield says children, who believe television advertising but know nothing of war, sanctions, or their parents’ credit card debt, mortgage, and balance at the bank, are the best bet.

“Another obvious tendency is expansion of entertainment areas in shopping centres –they are aimed to increase footfall and create identity of the project, decrease vacancy. Perception and approach to development of these areas is changing. Instead of traditional ice-rinks, bowling, gaming machines, new formats are becoming more popular – contact zoos, edutainment [sic] centres, rope parks, trampoline centres, quests, thematic theatres, exhibitions and hobby goods shops. New children entertainment centre Fiesta Park is entering the Moscow market; the Leonardo retail chain is expanding; the store with radio control models Pilotage was opened in a new format (with training tracks and areas for competitions and master classes) in Avia Park shopping centre.”

In addition to children as a retail marketing ploy and as a property investor come-on, Cushman & Wakefield also identify Chinese tourism to Russia. “Luxury brands report on sales growth and new shops openings. Among possible reasons of this trend there are: increase of Chinese tourists flow and currency exchange rate growth that made it cheaper to buy luxury brands in Russia.”

Cushman & Wakefield calculate the prime rental indicator for quality shopping centres in Moscow hit peak in 2008 at Rb99,480 per square metre. At the time that was equivalent to $3,995. The indicator hit a second peak last year at Rb159,432; but the dollar equivalent was $2,571. This means a drop of 36% in the underlying value of rental revenue or income. Dollar-denominated debt has remained the same, however. Cushman & Wakefield are forecasting an indicator of Rb145,000 ($2,197) for this year, and no improvement for 2017. At the current exchange rate, this means a further decline in the dollar value of shopping centre income. The squeeze on heavily leveraged investment funds is obvious. The reaction of bank lenders equally so: no new lending.

For the Class-A office segment of the Moscow market, Cushman & Wakefield report the peak rental indicator was $1,092 per square metre in 2008, before the crash began in the autumn of that year. The indicator plummeted to $549 in 2015, and sank another 21% to $433 in the first quarter of this year. It won’t recover to $500 until 2018, the report predicts.

The best Cushman & Wakefield can say about the collapse of real estate rental rates, and thus investor income and expected rate of return, is that “lease agreements with rents denominated in rubles or with special conditions of payment for dollar-denominated rental rates will be a market tendency in the upcoming years.” Not even thieves, says one analyst requesting anonymity, “will invest cash with such a dismal prospect.” A Moscow market observer adds that major private investor groups, like Mints’s O1, are being forced out of the domestic real estate market and into other lines of Russian business.

Five companies specializing in Russian real estate investment are publicly listed shareholding entities. The chart of their share prices on the London Stock Exchange shows the trend in their asset value has been negative for more than five years. Only one company, PIK (grey line), has managed to stay above minus 20% for the past two years; its asset portfolio is concentrated in the low to medium-priced residential segment of the market, not the higher-price commercial segment.

The chart also shows that the trend over time has been one of deepening value loss until the start of this year. The recent recovery has been modest, though; it promises no move above minus-40%.

And here is the Raven Russia chart over the past five years: its value is down 23%

In terms of current capitalization on the London stock market, PIK leads with a value of $2.5 billion; LSR, 1.7 billion; Etalon, $827 million; Raven Russia, $260.5 million; and AFI, $177 million. Some of the names of the control shareholders of these entities are well-known – Sergei Gordeev, Alexander Mamut (PIK) ; Andrei Molchanov (LSR); Vyacheslav Varenkov (Etalon); and Lev Leviev (AFI). Only one of them, Mamut, has been invited to the annual December dinner at the Kremlin for oligarchs.

Private real estate developers like Mints’s O1 or Samvel Karapetyan’s Tashir Group claim to be richer, at least in the advertising they place in Forbes Russia. Even more unfamiliar names – Zarakh Iliev and God Nisanov (Kievskaya Ploshchad), Alexander Svetakov (Absolut Group) — appear in the Forbes listings. But this is advertising.

Asked to clarify the liabilities to assets ratio of the big names – how much they are obliged to repay compared to the shrinking value of what they claim to own — noone in the Moscow market will say. Knight Frank acknowledges it cannot comment because it is retained by some of the big names. Cushman & Wakefield conclude : “In Q2 we expect low business activity to remain. Real estate indicators (vacancies, rents, take up) will be stable, but still in the red zone. Many factors suggest that we are close to the bottom of the cycle, however major threat now comes from consumer market.”

That’s the experts’ way of saying that whatever the financial situation is for Russian real estate investment today, tomorrow is likely to be worse, before it gets better.