By Mike Kimel, a writer for Angry Bear blog. Cross-posted from Angry Bear.

This post looks at the relationship between the top marginal income tax bracket and growth in real GDP per capita (from NIPA table 7.1) in the subsequent year or years. 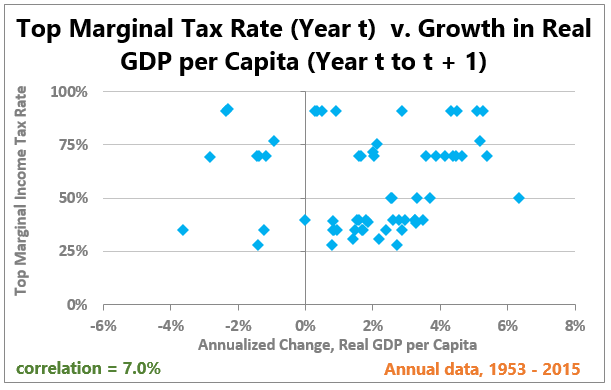 Notice the very slight positive correlation between marginal income tax rates in a given year and growth the following year? Perhaps it doesn’t mean that higher marginal tax rates precede faster growth, but it does call into question the idea that lower tax rates are generally responsible for faster economic growth.

Figure 1 above goes back to 1953 because I felt it makes sense to avoid periods in our history where the economy was very, very different such as the Great Depression, WW II, and the immediate post-war recovery. But the first complaint from those who don’t like what the graph implies will be that I am cherry-picking. To deal with that, here’s Figure 1 going back to 1929, the first year for which reliable data is available (may all thanks be bestowed upon Simon Kuznets): 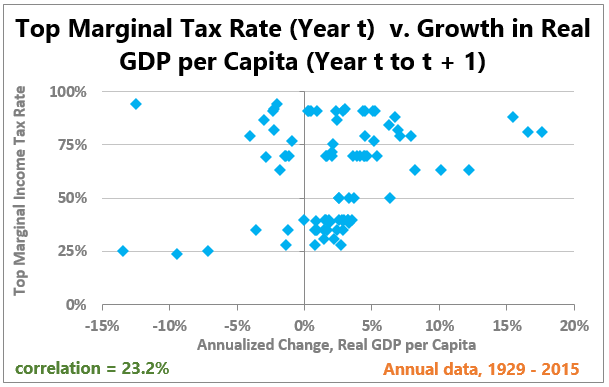 If anything, the correlation between tax rates and growth in the subsequent year seems stronger when we include the entire data set. In other words, we have less reason to believe that lower taxes lead to faster growth rates than when we started.

Before we go on, a few words about the mechanism which explains the result. I feel like I’ve covered this a million times, but here we go again. If you own a business, you can reduce your tax bill by minimizing the amount of money that gets recognized as taxable income. The easy and legal way to minimize taxable income is to reinvest those sums back into the business. You do that by buying more assets, or by doing more maintenance, or by hiring more people. In other words, you minimize your tax bill by growing your business. In general, the more businesses grow, the more the economy grows. Now ask yourself… are you more likely to avoid taking another dollar out of the business when the tax rate on that marginal dollar is 30%, or when it is 70%? The answer is obvious, except, apparently to most economists and those who listen to them, or else we wouldn’t have so many people who believe something so clearly at odds with the data.

Now… if higher tax rates –> more investing in business, and if investing in business takes a while to have an effect, then tax rates today should affect the economy for more than just the next year. For instance, here’s Figure 1 again, but this time looking at growth in real GDP per capita 3 years out, and not just one. 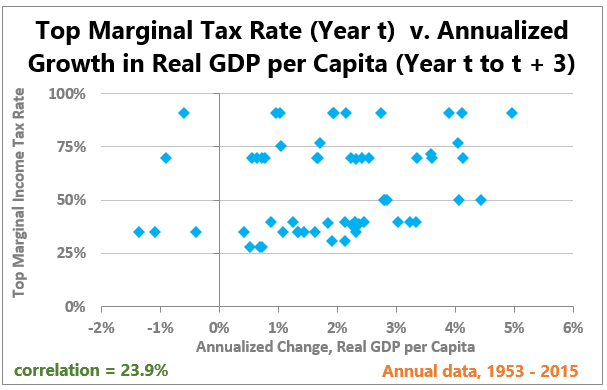 Notice how the correlation between tax rates in one year, and real growth rates in subsequent years jumps when we go from one year to three years out. I will have a few posts on this topic going forward showing how far out that effect actually goes. (Aargh – that makes three different series I am trying to juggle at the same time!) Let’s just say, as a placeholder, that the effect goes as far out as you’d expect if you really put some thought into it.

One more thing before I close. I want to briefly show why so many people who believe they have an understanding of economics are certain that lower tax rates lead to more rapid growth. (Even the Democrats seem to concede this. They tend to campaign on higher tax rates due to “fairness” and “fiscal responsibility” rather than growth.) Figure 4 is the same Figure 1, but years in which there was a tax hike are highlighted in orange and years in which there was a tax cut are highlighted in red. 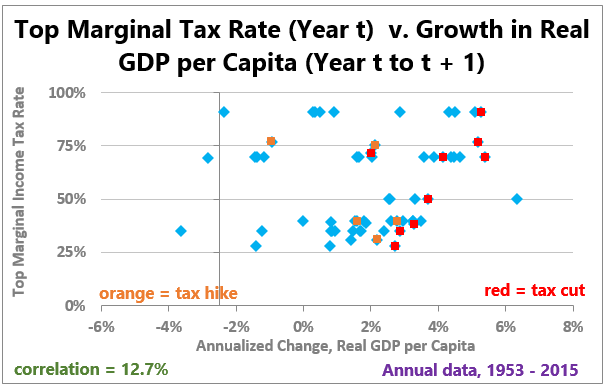 So here’s what seems to happen. As all the graphs have shown, higher tax rates are correlated with faster growth rates in subsequent years. But… years immediately following tax cuts generally do outperform. Thus, it seems that in the very short run, a tax cut can be beneficial, but overall, the economy seems to grow faster when tax rates are higher. Or, as Keynes would put it, you use the tax cut when the economy needs to be goosed, but in normal times, keep the growth rate higher. How much higher, of course, is a question worth considering. Obviously there’s a limit to this – a 100% tax rate is not going to generate any growth at all.

There’s a lot more to cover, including how tax policy goes a long way toward explaining why our economic growth has essentially died. I will have more posts on the topic, but in the meantime, if you want my Excel spreadsheet, drop me a line at my first name dot my last name (that’s mike period kimel – kimel has only one m, thank you very much) and all that is at gmail dot com. I’ve made the spreadsheet interactive. It has a primitive menu allowing you to change the years which are included in the analyses, how many years ahead it looks (in terms of real GDP per capita growth), whether to highlight tax hikes or tax decreases, and how big tax changes have to be in order to be highlighted. The menus are definitely not idiot-proofed but you won’t require much Excel knowledge to play with the data yourself. At least through the next few weeks I’ll be happy to share the spreadsheet. Beyond that, no guarantees.