Think it’s scandalous that the average 2014 pay of the CEOs of the 500 biggest companies was 373 times that of the typical worker, as the AFL-CIO reported? You aren’t scandalized enough. Their take home pay, which is reported in the bowels of SEC filings, as opposed to the Summary Compensation Table that the AFL-CIO, along with most analysts and reporters rely on, was a stunning 949 times that of the average worker in 2014.

How did this massive disparity come about, and why is the SEC on the side of such gross understatement?

An important new paper by William Lazonick and Matt Hopkins, which is recapped in detail in The Atlantic, explains this gaping disparity. The culprit is the differences in the approach used to measure stock-related compensation, which is the bulk of top executive pay.

The widely-used, readily accessible pay reports in the SEC-mandated Summary Compensation Table uses an approach called “estimated fair value” (ESV), which is a Black-Scholes options value based method. That may sound technical and therefore be presumed to be accurate, but Black-Scholes models are based on all sorts of efficient markets assumptions, namely, that everyone has the same access to information, which is clearly not operative with CEOs. Not only do corporate insiders have an information advantage, but CEOs can and do take active steps to boost stock prices, like engaging in buybacks, and they have advanced knowledge of when those programs are to be announced. So it should come as no surprise that CEOs can time when they execute their option on when to sell stock far better than an ordinary investor. And that’s confirmed by the results shown in the obscure Option Exercises and Stock Vested table, which is based on “actual realized gains” or ARG. And this is a real, hard dollar figure. Per the Atlantic story:

ARG is a figure that permits the calculation of senior executives’ actual take-home pay—the number they report in their personal-income tax filings with the Internal Revenue Service.

Moreover, the disparity in favor of ARG is consistent over recent years: 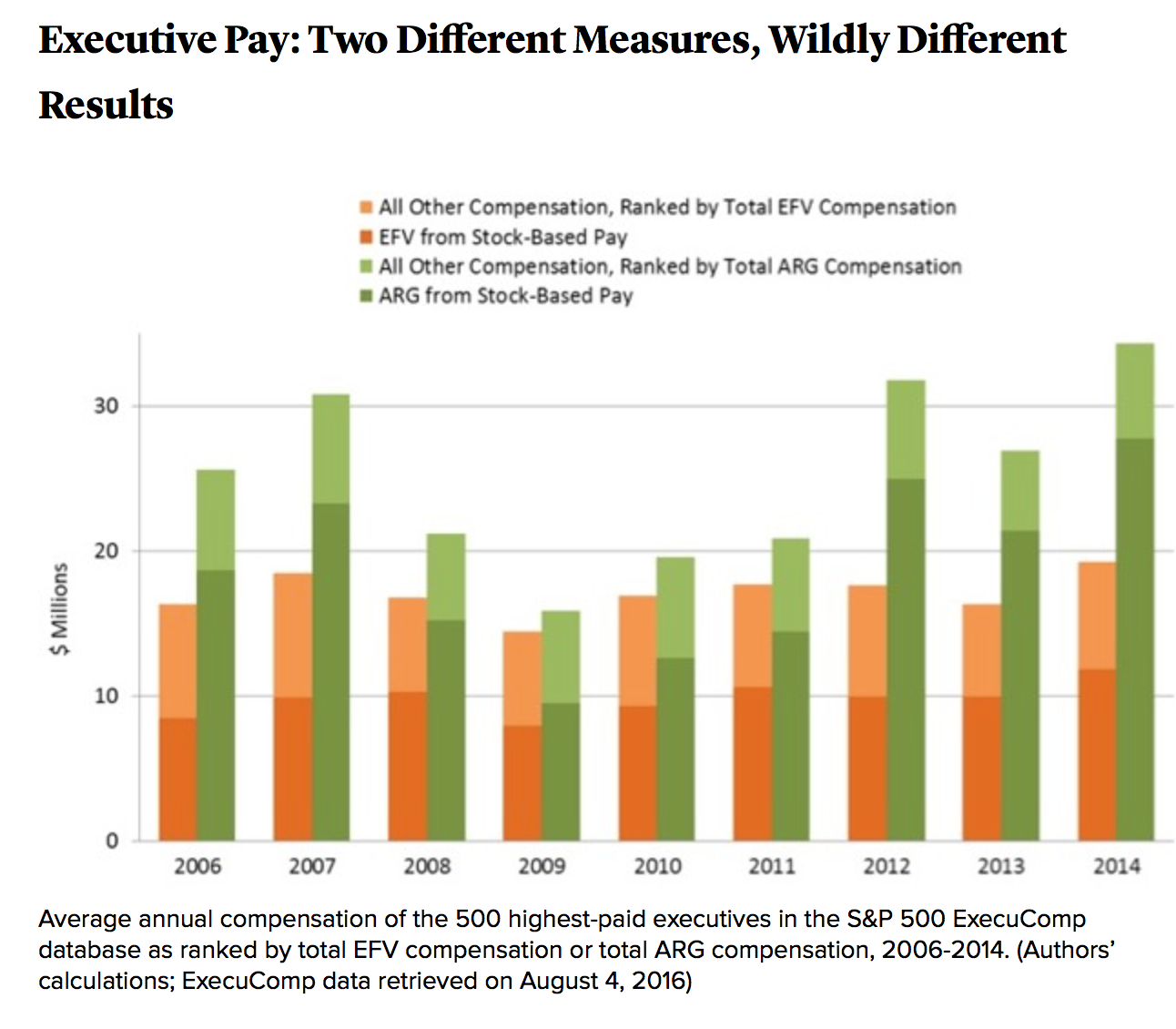 As the authors explain in the Atlantic:

EFV tends to understate ARG because its estimation methods, which seek to value stock-based pay in advance of realized gains, fail to capture actual stock-price increases and the timing of realized gains. In the case of stock options, the mathematical models, known as Black-Scholes-Merton, that are used to generate EFV assume that stock-price changes are distributed such that one should expect lots of small changes but very few large changes in stock prices. EFV is recorded as compensation in the year in which shares in an option vest, using the grant-date stock price in the estimation model. But, in timing the exercise of the options and generating ARG, executives are on the lookout for large stock-price increases, which will be driven by some combination of innovation, speculation, and manipulation. Black-Scholes-Merton-type models capture none of these three drivers of the stock market, whereas top executives can to some extent influence all of them.

The underlying paper gives examples of how large the differences can be. For instance (emphasis original):

One dramatic example of this difference between fair-value and realized-gains measures is the total compensation of John C. Martin, CEO of Gilead Sciences, a drug company that has been in the public spotlight since 2013 because of the extraordinarily high prices of its Sovaldi/Harvoni medicines for Hepatitis-C.

In an op-ed entitled “Gilead’s greed that kills,” economist Jeffrey Sachs accurately describesGilead as a company “driven by unquenchable greed,” and goes on to say that “Gilead CEO John C. Martin took home a reported $19 million in [2014] compensation –the spoils of untrammeled greed.” But the figure of $19.0 million, which is reported as Martin’s total 2014 compensation in the Summary Compensation Table of Gilead’s proxy statement, includes the estimated fair-value measures of Martin’s stock
-based pay, not his realized gains.

In 2014 Martin actually took home $192.8 million, and in 2015, when his estimated fair-value pay was $18.8 million, his actual take-home pay was $232.0 million. From 1996 through 2015, as Gilead’s CEO, Martin’s estimated fair-value compensation totaled $209 million but his actual realized-gains compensation totaled $1,001 million, of which 82 percent came from stock options and 13 percent from stock awards. Gilead’s drug-pricing policies and its stock buybacks helped Martin extractthis massive stock-based pay. If $19 million in annual compensation can be called “the spoils of untrammeled greed,” what should we call the $193 million and $232 million that the Gilead CEO
was actually paid in 2014 and 2015?

Why is the SEC giving pride of place in shareholder reports to what Lazonick and Hopkins correctly call a mismeasure of executive pay? Historically, disclosure on compensation covered only cash amounts. In 1994, the agency implemented the Summary Compensation Table which included other pay elements. Companies also had to report ARG from exercised stock options.

So far, not so terrible. But in the 1990s, tech companies used options and stock awards for employees of all levels as a recruitment tool, and this practice became even more popular in the dot-com era. These options were dilutive, and investors wanted to measure their impact. The FASB latched upon EFV as a good estimate for the cost of these grants. But as we’ve discussed, this wasn’t a good technique for senior executives, who are uniquely able to identify windows when the stock price is trading at unusually attractive levels and take advantage of that. As Lazonick and Hopkins stress, “… the FASB would probably not have implemented EFV for reporting stock-option compensation expenses in 10-K filings.” Yet the agency has declared this dodgy metric as “the cornerstone of the SEC’s required disclosure on executive compensation” when it revised its Summary Compensation Table in 2006. And as the authors lament in the Atlantic:

Sadly, the SEC’s rules about corporate disclosure are moving in the wrong direction. Next year, as mandated by the Dodd-Frank Act of 2010, the SEC’s Pay Ratio Disclosure Rule will go into effect, requiring companies to publish the ratio of their CEO’s pay to that of their median employee’s. However, the SEC instructs companies to report these ratios using EFV measures of executive pay, not ARG measures—furthering the systematic underestimation of U.S. income inequality.

Needless to say, the actual riches that CEOs have been able to garner via stock price manipulation via buybacks that since 2006 have consumed more than half of net earnings, as well as the regular use of accounting tricks, have been widely lamented for producing rampant short-termism, looting, and slow liquidation of these enterprises, often masked by acquisitions. This isn’t capitalism, it’s rent extraction by well-placed insiders. Obscuring its true, obscene costs helps keep this diseased system going.