Has the progressive left in western democracies forgotten how to embrace the mainstream? When I compare the approach which anti-neoliberal causes take in the U.S. and Europe with the approach taken by the same causes in Asian countries, especially Japan, I can only say yes, it has.

One explanation for how pro-labor movements have been wrong-footed is that they have fallen into a trap which the economists espousing free market fundamentalism (most famously perhaps were the so-called “Chicago Boys”, for whom Milton Friedman was their spiritual leader) ended up setting for us. Neoliberalism took particular care to establish an intellectual underpinning. That foundation enabled neoliberal-leaning governments to derive their economic policies, polices for which they could claim a rational – scientific, even – justification.

When the left, belatedly, attempted to challenge neoliberalism’s political vanguard, we had to fight theoretical fire with fire. To do otherwise would have led to the creation of an open goal – that the left was backward, ignorant and anti-intellectual.

Here at Naked Capitalism, we cover at length – and I do mean at length, readers are purposefully challenged to engage with some fairly demanding material at times – the counterarguments to the prevailing neoliberal orthodoxies.  And who amongst us hasn’t sat down to read a 2000-word feature debunking this- or that- latest example of so-called free market nonsense with the same sense of anticipation that we sit down to a large portion of broccoli. We know it’s good for us, we know we have to do it and we know it’s part of our essential intake to remain healthy. But really, couldn’t it, just for once, be a little easier and a little more interesting? Or just a little more digestible.

Western anti-establishment traditions haven’t always been so infernally earnest. But in Europe and – most especially – in the U.S. these traditions of simple, bombastic and even crude rebukes to power and authority have succumbed to historical revisionism, sanitization and reframing.

Consider how we are taught to understand one of the more famous early works of the Protestant Reformation, the religious movement which utterly transformed society in several European countries in the 16th century. Known as “The Papal Belvedere”, this woodblock print was produced and distributed in Germany in 1545: 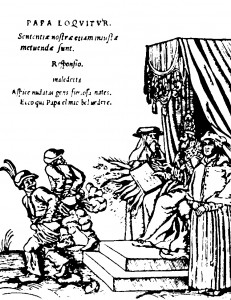 In the Papal Belvedere the cartoon shows two presumably Protestant working class men in contemporary clothing breaking wind in no small quantity in the direction of the Pope who is pictured sitting on a throne issuing a catechism or similar.

Even today, nearly 500 years later, this work is almost shocking in its irreverence and overt display of contempt. Yes, those German peasants literally are meeting the Pope’s fire and brimstone with some altogether different fire of their own making.

Possibly because the imagery is so powerful, so raw, if we are taught about this piece of anti-establishment media today the picture is usually explained away by a historian telling us that due to widespread illiteracy, the peasantry probably couldn’t read the words and so they required a pictorial representation of the same message as in the text.

But that simply isn’t true. The picture works without the words, but the words don’t make sense without the picture. The Latin / Italian at the top left is unintelligible if you try to read it but don’t have the image it goes with.

And consider the context of this 16th century version of a twitter comment. Designed to be quickly and cheaply printed then distributed in places where people gathered (market squares, taverns and so on), scanned quickly then thrown away, the notion that the picture was merely an afterthought is simply ridiculous. It isn’t a subsidiary part of the messaging. It is the message.

It’s no surprise that we in western democracies succumb to self-censorship if we’re told that there’s something base, unsophisticated or downright rude about making a populist appeal. And yet free-market clichés abound. How many times have you heard people talk about or read in print arguments as “the nation’s credit card”, “business being strangled by red tape” or “free trade” all of which come straight out of neoliberalism’s stash of banalities?

One seemingly insurmountable problem is that, because neoliberalism is a construction made entirely out of western capitalism, we almost instinctively find it difficult to critique it overtly. To do so would be somewhat akin to self-flagellation. So we need to cushion the blow a little by turning it into an abstract, theoretical concept and then we can feel safer picking over the minutia of that rather than staring directly at the ugliness of the culture which created it in the first place.

The Japanese, freed from such cultural loyalties, have no such reservations. We can learn a lot from them. We might even find – rediscover might be a better word – a grammar and a vocabulary for how to make clear, concise and direct assaults on neoliberalism’s most obvious failings without thinking we have to over-intellectualize about them.

As the Trans-Pacific Partnership agreement (TPP) continues to drag itself around like a political zombie, those amongst the Japanese population who are opposed to it are demonstrating how to – having already laid out their intellectual arguments over the past few years – engage with the wider population and encourage them to, if they are so inclined, tell the political class in Japan that they don’t want the Diet (Japan’s parliament) to enact the TPP. Numerous blogs, movements, pressure groups, activist collectives and one-man-bands have sprung up to remind people briefly (and the emphasis here is on brevity) what’s wrong with the TPP but then to direct responders to the most appropriate way of turning disquiet into specific action.

What they are most definitely not doing is getting bogged down in discussing the merits, or otherwise, of the theories of capitalism, trade, economics or finance.  The contrast between how the Japanese are opposing the TPP and how, typically, free trade agreements are opposed in the west is stark.

As an example, http://tpphantai.com/ (the URL means “Oppose TPP”) is typical of the sort of information which anti-TPP pressure groups produce. Let’s take a look. Apart from essential cultural or linguistic explanations, I’ll keep my commentary to a minimum. The imagery – the website is largely pictorial – speaks for itself. Manga-fans will see some familiar stylistic traits but Japan also has a long cultural tradition of pictorially commenting on current events. In addition to the overt criticisms of the TPP, there’s something else going on in these vignettes – I’ll come back to that when we’ve walked through each of them. 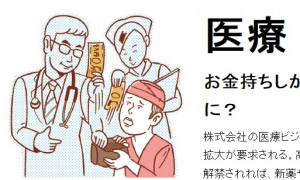 The title for this frame is “Healthcare” and the accompanying text asks if only the rich will be able to afford hospital care. What is interesting is that the doctor and the nurse are seen to be cleaning out the patient’s wallet. They are also given rather avaricious expressions. In Japan, like the west, clinicians are respected and generally seen as wanting to do their best for their patients so it’s not that the Japanese view doctors or nurses as being inherently greedy. What this image does is suggest that once money enters the healthcare scene it causes healthcare practitioners to turn into these kinds of personalities. 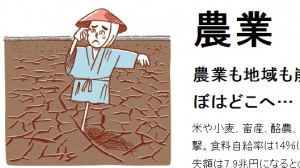 The title for this is “Agriculture” and the inference is a clear: Japan-as-a-dustbowl. Non-Japanese might not recognize the attire of the farmer-turned-scarecrow – this is classic rice farmer’s clothing. Rice and domestic rice production is a hot-button issue in Japan. 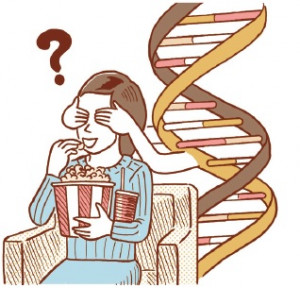 “Food Safety”, specifically genetically modified food which, as with rice, is another Japanese hot-button topic that the TPP will impinge on. 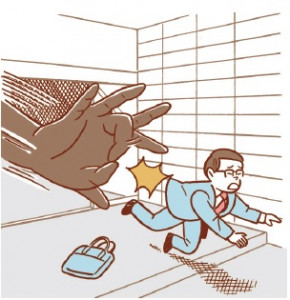 The theme here is “Employment”. But not just any old employment, from the original Japanese text, the word used is the one most associated with permanent, steady employment. This is why the man being kicked out of the office is dressed as an archetypal Japanese salaryman. Also, as a teaser for my final point which I’ll make after we’ve seen all the images, Adam Smith’s invisible hand is clearly visible here and, unlike the theory, isn’t benefiting anyone. 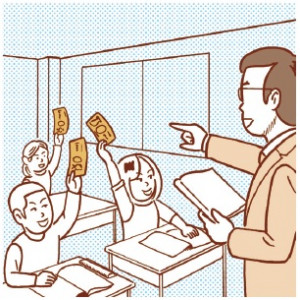 “Education” – this one is probably the creepiest because while the accompanying text warms of the perils of turning education into a business, the kids are clearly learning fast that money talks and are happy, literally, paying to play. 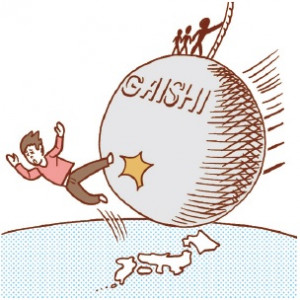 The wrecking ball being swung in this frame, “Public Works”, has “GAISHI” written on it. “Gaishi” means “foreign capital” in Japanese. The Japanese language has a perfectly good “word” of its own for this (外資) which is even written into the subheading text on the website. So why write it in Latin characters on the wrecking ball? Perhaps you can start to guess what else is going on here in the sequence of images. 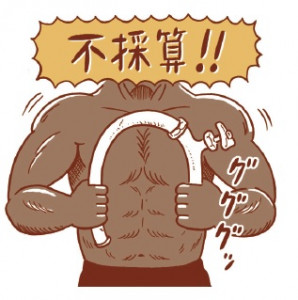 Of the series, this is probably the only one which isn’t understandable without knowing what the Japanese text says. The title is “Public Services” and where the “head” of the strongman is supposed to be the word “Unprofitable” is written in its place. The themes in this picture borrows heavily from classic manga imagery. The topic of this frame is how the TPP would lead to public services being destroyed (the water pipe is used symbolically) in the name of profit. 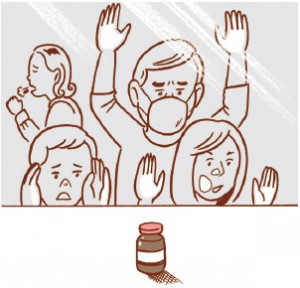 It is perhaps not immediately obvious exactly what this frame is concerned with although the Lichtenstein-influenced composition and colouring have the same cold, chilling effect on the viewer. The title is actually “Intellectual Property”, the people outside the glass can see the medicine, but can’t access it because of the un-seeable but still  nevertheless effective barrier. 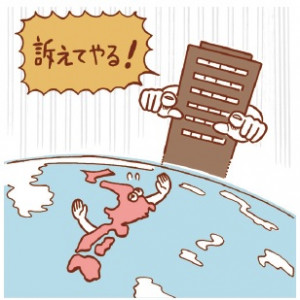 Okay, there’s no flatulent peasantry in any of those pictures. But something equally subversive and confrontational is going on which a non-Japanese viewer might miss but to the Japanese it would be overt. Look again at what the woman is eating in “Food Safety”. That’s not noodles or sushi. Popcorn and soda aren’t your typical Japanese diet. But while they’re not a burger and fries, they’re redolent of what non-Americans think of as typical U.S. food. And where is the wrecking ball being swung from in “Public Works”? As a reminder of geography, it is coming from the east back to Japan in the west. The U.S., in other words. This is all the stranger as the other TPP-participating countries are in Asia or to the south (Australia and New Zealand). So the ball could have just as accurately been show as coming from the south or the west. Finally, where is the looming office block in “ISDS”? New York or Washington by the look of it.

The TPP opposition campaigns in Japan are, then, certainly not afraid of playing the Japan nationalist and anti-foreign influence card. Nor are they concerned about taking aim at western capitalism’s Holy Grails.

Are they right to take the gloves off in their anti-TPP fight? When does legitimate criticism become offensive, even xenophobic? Or, if the promoters of neoliberal thinking don’t play by Queensbury Rules, shouldn’t the Japanese who are opposed to the TPP not hesitate from getting into a bare knuckle fight with no holds barred?

The answer to which for me is, how far would the Reformation have got if they’d played the game that the papacy wanted them to play?