U.S. crude oil storage is filling up with unaccounted-for oil. There is a lot more oil in storage than the amount that can be accounted for by domestic production and imports.

That’s a big problem since oil prices move up or down based on the U.S. crude oil storage report. Oil stocks in inventory represent surplus supply. Increasing or decreasing inventory levels generally push prices lower or higher because they indicate trends toward longer term over-supply or under-supply.

Inventory levels have reached record highs since the oil-price collapse in 2014. This surplus supply is a major factor keeping oil prices low. U.S. inventories are critical because stock levels are published every week by the U.S. EIA (Energy Information Administration). The IEA (International Energy Agency) publishes OECD inventories, but that data is only published monthly and it measures liquids but not crude oil. It also largely parallels U.S. stock levels that account for almost half of its volume. Inventories for the rest of the world are more speculative.

Understanding U.S. stock levels should be straight-forward. Every Wednesday, EIA publishes the Weekly Petroleum Status Report which includes a table similar to Figure 2. 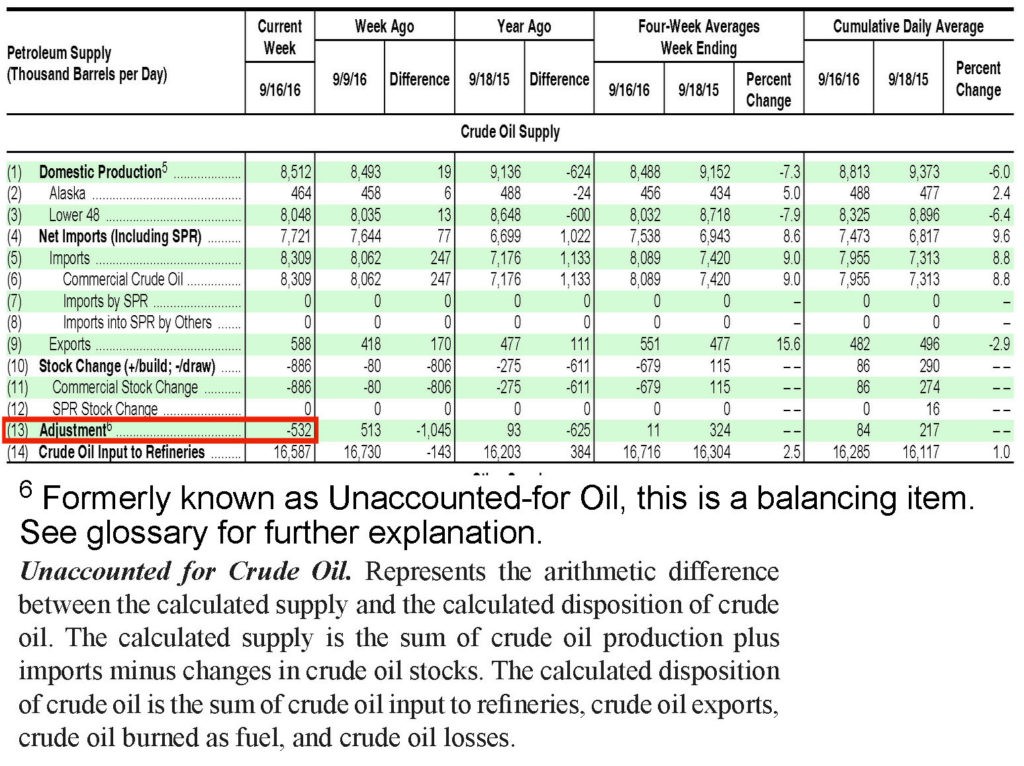 The calculation to determine the expected weekly stock change is fairly simple:

Domestic production and net imports account for crude oil supply, and refinery inputs account for the volume of oil that is refined into petroleum products. If there is a surplus, it should show up as an addition to inventory and a deficit, as a withdrawal from inventory.

But that’s not how it works because EIA uses an adjustment in order to balance the books (Table 1).

The logic is that estimated stock levels in tank farms and underground storage are relatively dependable and that any imbalance must be from less reliable production, net import or refinery intake data.

There is nothing wrong with adjustment factors if they are small in comparison to what is to be balanced. In the Table 1 example from September 2016, however, the adjustment is 60 percent of the stock change–a bit too much.

A one-off perhaps? No, it’s a permanent problem that has gotten worse during the last several years.

Figure 3 shows that crude oil supply and refinery intake of oil vary considerably on a weekly basis. The balance is cumulatively negative over time beginning with a zero balance in January 1983. That suggests that crude oil stocks should be falling over time but instead, they have been rising. The vertical bars show the weekly crude supply from production and net imports either exceeding the refinery input requirements (positive, green) or not reaching these requirements (negative, red). The solid red line is the cumulative.

Looking at only recent history, an additional gap of nearly 200 million barrels developed as refinery intake exceeded crude oil supply for most of 2010 through 2014 (Figure 4). Adjustments were introduced in late 2001 so let’s look at the period starting January 2002 (Figure 5). 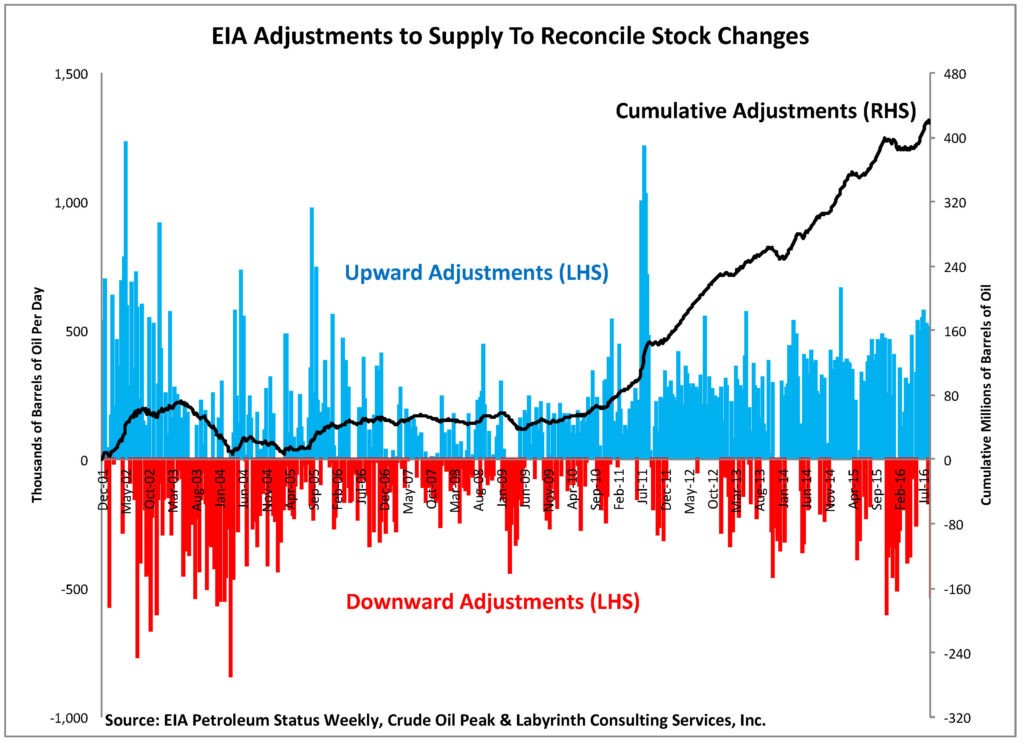 There are both upward (blue) and downward (red) adjustments. Upward adjustments resulted in a 420-million-barrel stock increase over the period January 2002 through September 2016. 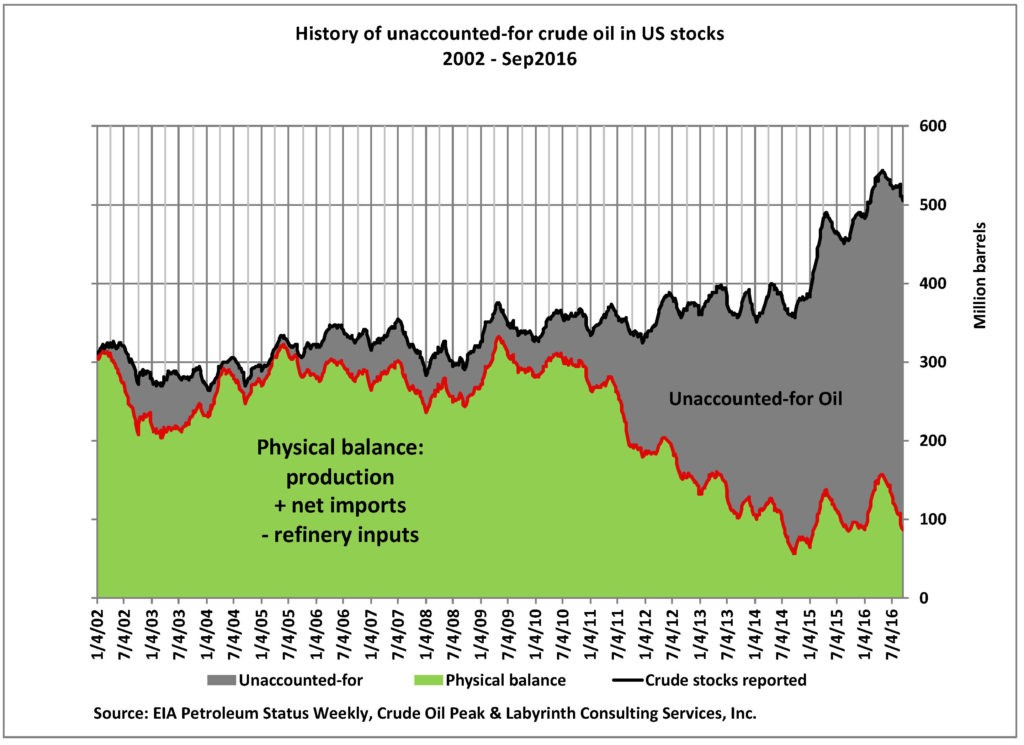 When You Have Eliminated The Impossible

There is no obvious solution for the mystery of unaccounted-for oil in U.S. inventories. Possible explanations, however, include:

or any combination of those possibilities.

Production, imports and refinery inputs are taxable transactions. It is likely that reporting errors are largely self-correcting over time because of the financial incentive for government to collect its due.

State regulatory agencies are the source of production data. Their principal objective is to assess production taxes. It is unlikely that states would consistently under-estimate production and forego substantial tax revenue.

Crude oil imports are subject to both tariffs and excise taxes so it seems unlikely that the U.S. government would consistently fail to identify under-payment of those revenues.

Similarly, taxes are involved when refiners buy crude oil and sell refined products. It seems improbable that they would over-state those transactions and consistently over-pay associated taxes.

The principal components of supply balance—production, imports and refinery intake—are shown in Figure 7. In a general way, increased production and decreased imports tend to cancel each other out. Refinery intake has increased since about 2010.

Adjustments for unaccounted-for oil are unreasonable and out of proportion to the underlying factors that determine crude oil stock levels. It would be speculation to blame anyone for this apparent statistical disaster. Nevertheless, there is a problem that has major implications for oil price and the reliability of reported data.

In several of his Sherlock Holmes mystery stories, Arthur Conan-Doyle wrote, “When you have eliminated the impossible, whatever remains, however improbable, must be the truth.”

The truth—however improbable—is that inventories are probably much lower than what is reported.