Yves here. While the recent trend in foreclosures looks alarming, it appears that servicers are making a push to clear out what they regard as old inventory, even though it appears to be include defaults that started after the crisis. One has to note cynically that they waited to the tail end of the Obama administration to act. Did servicers hope that their move would not get much notice from the press, given all the election noise, and hence little to no pushback from politicians in the affected cities and states. Here is one take, from DSNews:

October foreclosure filings increased 27 percent from the previous month after experiencing a 129-month low in September, according to the latest U.S. Foreclosure Market Report from ATTOM Data Solutions.

“Part of this could be tied somewhat to the election with lenders holding back for the last few months as there are uncertainty around the election,” says Daren Blomquist, SVP of ATTOM Data Solutions. “Even though they didn’t know the outcome in October when we saw this activity take place, there was probably a lot of certainty thinking that Clinton would win. I think with this certainty, lenders went ahead and pushed through more foreclosures.”

Compared to October last year, homes with foreclosure filings still decreased, but this nationwide decrease is covering up what is now happening in 28 states and Washington D.C., according to the Foreclosure Report by ATTOM Data Solutions. There, the inventory of homes with foreclosure filings is beginning to rise even on a year-over year basis. And in some states it soared year-over-year:

When home prices rise for years, foreclosure filings become rare because defaulting homeowners can usually sell the home for more than they owe and pay off the mortgage. The problem arises when home prices fail to rise locally, and it balloons when home prices fall. We’ve seen that last time around. After bouncing along super low levels during Housing Bubble 1 through 2005, foreclosure filings skyrocketed during the housing crash starting in 2006. At first it was just an uptick that no one paid attention to. By 2008, it helped take down the financial system.

Foreclosure filings peaked in late 2009, began dropping in 2010, and then tapered down to 2006 levels as foreclosures were processed, and as the home price surge of Housing Bubble 2 made new defaults less likely. But the spike in October stands out as much as those in the early phases of the housing bust in 2006 and 2007. Note the blue bar on the right: 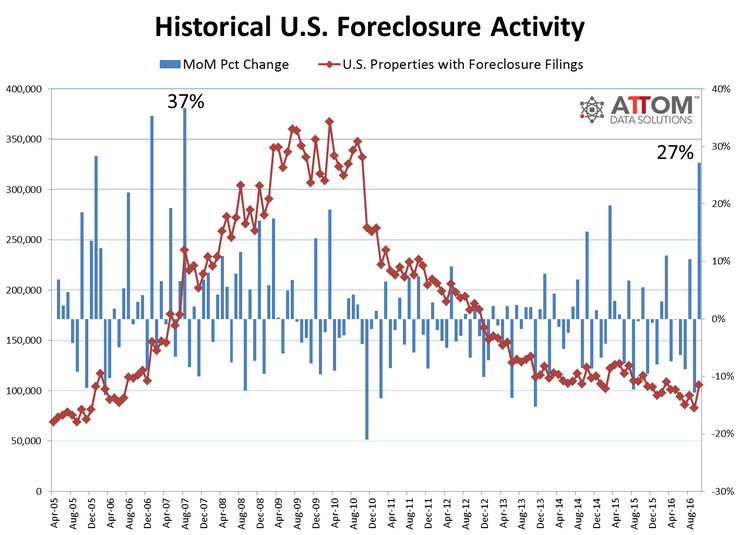 While some states are still trying to digest the foreclosures from the last housing crisis, according to Daren Blomquist, senior VP at ATTOM, “the foreclosure activity increases in states such as Arizona, Colorado and Georgia are more heavily tied to loans originated since 2009”:

“The loans used in this housing recovery that appear to be most susceptible to foreclosure are those such as FHA and VA with low down payments. Our data shows FHA and VA loans combined represent 49% of all active foreclosure inventory for loans originated in the seven years ending in 2015.”

This chart shows the soaring proportion of FHA and VA mortgages issued since 2009 among the active foreclosure inventory. 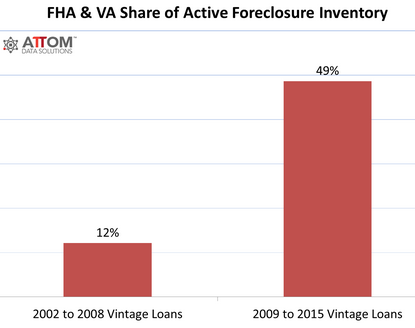 And here are the “top” ten highest foreclosure rates among the 216 metropolitan areas with a population of over 200,000:

These “foreclosure filings” are based on data that ATTOM gathered in 2,200 counties where over 90% of the US population lives. They include data on the three phases of foreclosure:

Broken down based on these three phases of the foreclosure process:

Foreclosure starts jumped 25% in October from the prior month, to 43,352. While still down 11% year-over-year, it was the highest monthly increase in foreclosure starts since December 2008.

Foreclosure starts increased even year-over-year in 23 states and Washington D.C. In some states they soared. The “top” five:

Auction notices jumped 30% from the prior month to 43,815 (in some states, these are foreclosure starts), the biggest monthly increase since January 2006. While still down 6% year-over-year nationally, auction notices rose year-over-year in 25 states and Washington D.C. The “top” five:

Bank repossessions (REO) jumped 25% from the prior month to 34,288 homes, the biggest monthly increase since July 2015. While REOs were still down 6% year-over-year nationally, they increased in 22 states and Washington D.C. The “top” five:

ATTOM VP Blomquist tries to remain sanguine: “The increase in October isn’t enough evidence to indicate a new foreclosure crisis emerging in these states, but it certainly demonstrates that this housing recovery is not completely devoid of risk.”

So take this as an early red flag, the kind you might have seen in 2006 when no one paid attention to red flags in the housing market.

Some of the same characters that played leading roles during the last housing bubble and bust are back in their full glory. Read…  Housing Bust 2? Low- and No-Down-Payment Mortgages Surge, “Shadow Banks” Dominate