Yves here. This post confirms the intuition of many readers, that immigration is not a plus for growth…at least in the post-financial-crisis low-growth environment. And there is no sign we are getting out of that ditch any time soon.

This post uses data from the World Bank to look at the effect of migration on countries around the world. I will begin by looking at all countries for which the World Bank has data, then drill down.

So to begin, the data used in this post:

1. Net migration, by country available here. The most recent data is from 2012. Net migration is defined as the “total number of immigrants less the annual number of emigrants, including both citizens and noncitizens. Data are five-year estimates.” As an example, the US reportedly had net migration of 5,007,887 (i.e., positive) in 2007 through 2012, while Bangladesh had a figure of -2,226,481 (i.e., negative) in the same years. That should fit with your intuition.

2. PPP GDP per capita. Data available here. The last year for which data is available is 2015.

I started by looking at immigration relative to the size of the population. I assumed that the net migration figure was the same in each of the five years. (I know – not correct, but reasonable.) I then divided the Net Migration from 2012 by Population from 2012. I then compared that to the annualized growth in PPP GDP per capita from 2012 to 2015. In other words, I looked at the Net Migration as a share of the Population in 2012 and the growth rate in the subsequent three years. I put both series up on a scatter plot.

Before I put up the graph, I would also note that I did leave some data out. It goes without saying that if a country did not report information, I did not include it. Additionally, countries reporting zero net migration were left out. After all, even North Korea has escapees, er, migrants, even if they won’t admit to it. Otherwise, everything went into the pot leaving a sample of 176 countries. Here’s what the relationship between Net Migration (from as a share of the Population in 2012 and the growth in PPP GDP per capita from 2012 to 2015 looks like for them: The correlation is -0.32. That is, countries with higher Net Migration as a share of their Population tended to perform less well over the subsequent three years. In other words, it is better to give than to receive, at least when it comes to migrants.

Of course, if we want to understand the effect of Net Migration in the US and other Western Countries, perhaps it makes sense to narrow things down. The next graph uses only countries deemed to be “High Income” by the World Bank. I also restricted the sample to countries with populations exceeding 1 million people to avoid trying to learn life lessons based on recent happenings in Monaco or Andorra. Here’s what that looks like: 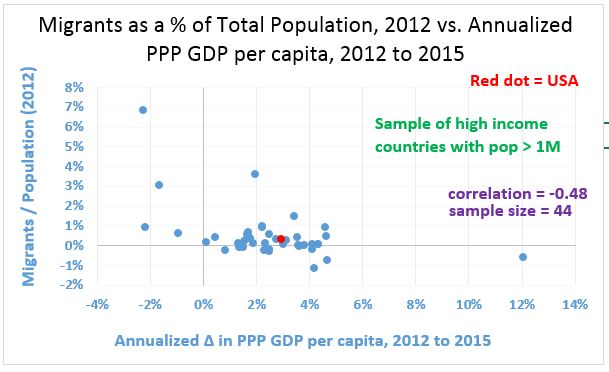 The population sample dropped from 176 countries to 44, and the correlation tightened up a bit to -0.48.

Frankly, I think the sample still needs cleaning up. Most of the points on the graph look bunched up because there are a few countries with very, very high Net Migration. For example, Oman is at 6.8%(!!!!), Qatar 3.6%, Kuwait 3.0% and Singapore 1.5%. These are mostly special cases, even for high income countries, and I would venture to say, provide very few lessons on immigration that are applicable to the US or most of the West. Limiting the sample to countries with Net Migrants to Population under 1.4%, the graph now looks like this: 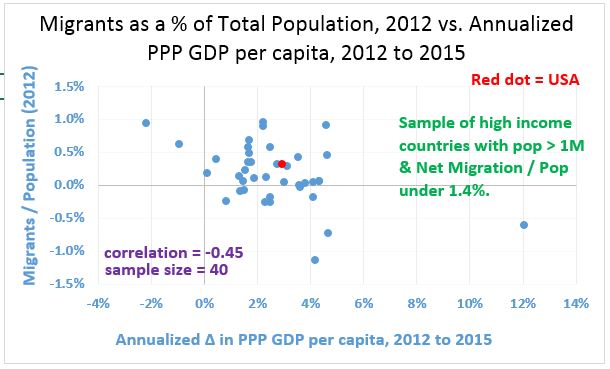 This doesn’t change the outcome much, but it makes things easier to see. If desired, we can cut out one more outlier – this one on account of excessive economic growth. The point on the far right side of the graph is Ireland, bouncing back (in PPP GDP) from the monster collapse in 2007-8. Removing Ireland as well gives us this: 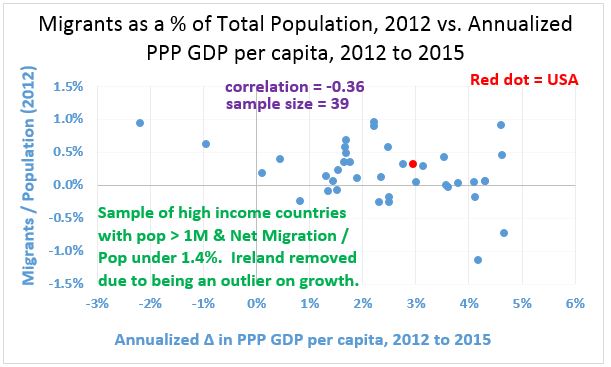 The absolute value of the correlation drops, but the fact remains: we are still left with a negative correlation between Net Migration as a percentage of the Population in 2012 and the growth in PPP GDP per capita between 2012 and 2015. We can do a bit more pruning, but frankly, the data simply refuses to support Holy Writ. Sure, these graphs don’t prove that immigration is bad for growth. However, they make it very, very hard to argue that immigration had a positive effect on growth during the past few years. Of course, that isn’t what we hear from our betters.

I will follow up this post with looks at other periods for which data is available from the World Bank. Meanwhile, I put together a spreadsheet that allows the user to make changes to the dates or downselect the data through income level, population, etc. It’s a bit large, but I will send it to anyone who contacts me for it within a month of the publication of this post.  I can be reached at mike and a dot and my last name (note – just one “m” in my last name) and the whole thing is at gmail.com.