Political risk means all 2017 investment bets are off FT

Why aam aadmi is not mad at NaMo despite DeMo Times of India. “[T]he average Indian often appears to wait for the urban sophisticate to reveal his learned opinion so that he can feel the exact opposite emotion.” Seems a little binary. And the writer is, himself, an urban sophisticate. So…

Is it just me, or are Pravda on the Potomac and Izvestia on the Hudson being unusually sloppy in their War Scare/Red Scare narrative? Here are some recent stories, with subsequent corrections:

Two Russian Compounds, Caught Up in History’s Echoes NYT. But they got the wrong house: 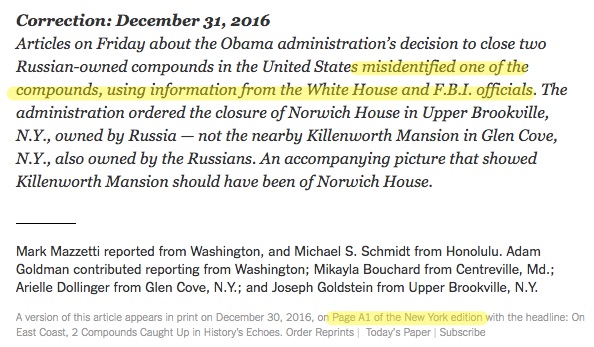 The correction shows that material from “the White House and FBI officials” went directly to page A1, without being checked for accuracy. So I guess we have state media after all?

The correction shows that WaPo never bothered to contact Burlington Electric; their statement.

And of course there’s WaPo’s (defamatory) PropOrNot piece, which set the bar for correction about as low is it can be set:

Recent Polls Say Nobody Else Trusts the Media, Either The Writings of John Laurits (MR).

Economic Efficiency versus Democracy: On the Potential Role of Competition Policy in Regulating Digital Markets in Times of Post-Truth Politics Josef Drexl and Ludwig Maximilian, SSRN “The efficiency approach, as advocated by the Chicago School in particular, only provides a very narrow approach to competition law analysis that relies on the preferences of consumers. This approach remains especially insufficient for the regulation of firms that provide citizens with politically relevant news and information. “

On Trump’s Reaction to Putin Not Expelling American Diplomats Ian Welsh. The hysteria knobs are already at 11. Where do we go from here?

Donald Trump Is Unpopular, and So Is the GOP’s Agenda Jamelle Bouie, Slate

The Rules of the Game: A New Electoral System NYRB

2017 is not just another prime number 松鼠博士的魔法眼鏡. Math-minded readers?

The Pessimist’s Guide to 2017 Bloomberg. NC ran this when it appeared, but for those who missed it…

Thin Green Line: 20 Groups Standing Between You and Doom Counterpunch

The 99 best things that happened in 2016, from Ebola’s eradication in West Africa to saving the manatees Quartz

A Leap in the Dark The Archdruid Report

A Change Is in the Air James Kwak, The Baseline Scenario

The Econocracy: a review Stumbling and Mumbling

The UBI already exists for the 1% Matt Bruenig

London Rolls Out the Blood-Red Carpet for Kleptocrats NYT

How to Convince Someone When Facts Fail Scientific American