Yves here. This article might seem more logical as a weekend item, but a change from our regular programming seemed in order.

I’m no fan of the American obsession with happiness, on pragmatic grounds (see this 2008 article, The Dark Side of Optimism). But there are deeper reasons for embracing difficult emotions, rather than try to repress them, flee through diversions, or medicate them away.

A major objective of religion is to reconcile people to the inevitability of suffering, loss, and death. The author asks, “Melancholy also has a faint quality of mourning, even a kind of grief, but for what?” I think it is for the transience of existence, the Japanese mono no aware, although I believe that sentiment is less intense than Western melancholia. Readers?

Without knowing the extremes of sadness and joy we can never fully know or feel all that life is. 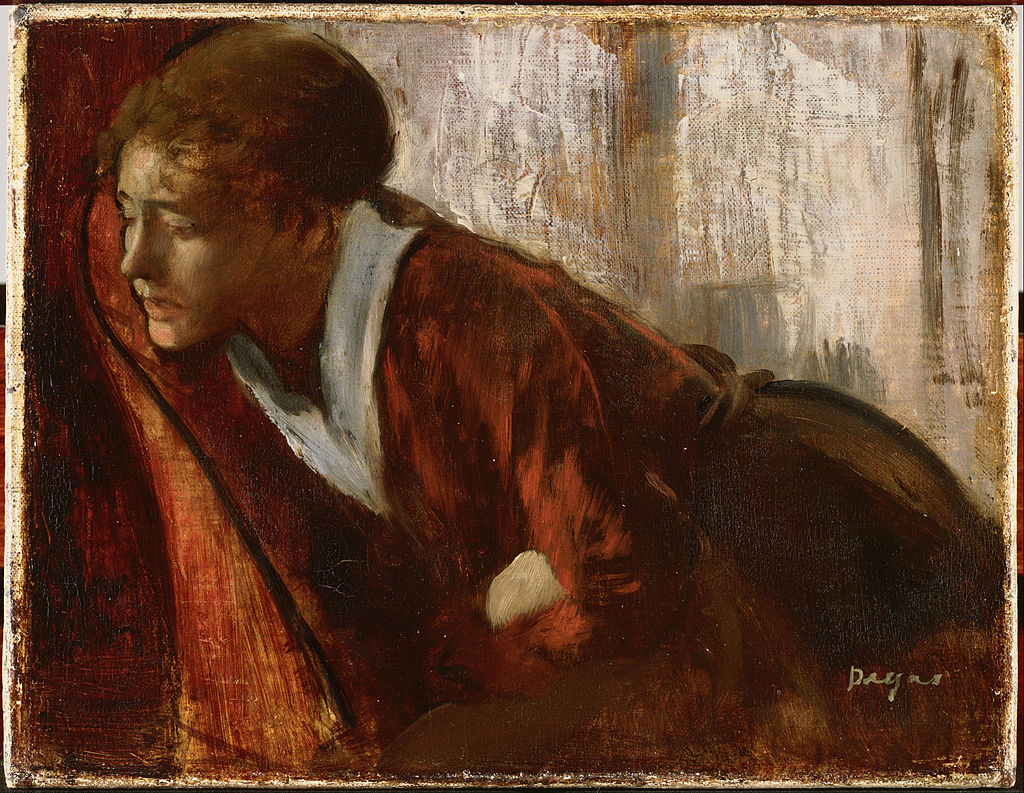 “There is something so enchanting in the smile of melancholy. It is a ray of light in the darkness, a shade between sadness and despair, showing the possibility of consolation.” Leo Tolstoy

What if melancholy can be passed down through generations, not just culturally but at the level of our DNA? Melancholia has long been seen as a key element in artistic inspiration, along with a way of turning pain and sorrow into healing, and ultimately, an acceptance of life’s inescapable emotional sufferings and wounds.

The science of “behavioural epigenetics” is now exploring how this might actually work by studying the ways in which “signals from the environment trigger molecular biological changes that modify what goes on in brain cells.” It’s a controversial idea because up until recently, it was thought that epigenetic information was erased over time, leaving a blank slate for every new generation.

But what if genes that have been influenced by negative environmental factors like famine, conflict, slavery or alcohol abuse could retain some stressful memories that leave molecular scars on our children and grandchildren? The implications would be profound, especially because genetic engineering would be almost irresistible—and that industry has a far from illustrious history.

A recent study by Rachel Yehuda and others at the Mount Sinai Hospital in New York on the transmission of stress effects from holocaust survivors to their offspring claims exactly this—that severe psycho-physiological trauma experienced by parents has a measurable impact on the next generation. Stress wasn’t just culturally transmitted through holocaust stories; it was transferred at the level of the molecular biology of the brain.

So could there be positive connections across generations in this way, and if so, could these links be consciously strengthened or created?

Philosophers have long entertained the idea that melancholy and creativity are inter-connected.  Friedrich Nietzshe said that the suffering brought on by melancholy—“this evening twilight devil” as he called it—was vital to the mind and soul, even sacred. Suffering and difficulty, he thought, must be embraced, cultivated, and carefully crafted. Not for him the cowardly and numbing reassurance of what he called the “slave morality” of human timidity when faced with pain.

Without some kind of torment present in the soul, nothing of real or lasting value or beauty can be created. Without that dichotomy of emotional experiences; without knowing the extremes of sadness and joy, we can never fully know or feel all that life is. Similarly, Soren Kierkegaard wrote that melancholy was his “intimate confidant,” his “most faithful mistress,” and a place where he found “bliss.” Like Nietzsche, he thought that the suffering brought on by angst—melancholia’s more animated cousin you might say—was a necessary prerequisite for creativity.

Indigenous and shamanic cultures such as that of Aboriginal Australia have no problem in believing that melancholy and other experiences among our ancestors can shape our current reality for good and ill, and that in some way we can be psychically healed in the here and now by understanding this relationship. Aboriginal culture believes that the spirits of our ancestors reside in the crevices and caves of holy mountains, and that the hum of the wind, if understood and interpreted correctly, will reveal messages and signs from the dead.

Shamans, Sufi mystics and other ‘psycho-spiritual travellers’ have always played a highly-revered cultural and spiritual role as avatars who expand their ordinary consciousness through rhythmic dancing, hypnotic drumming or ingesting psychoactive substances, and who break through into suspended time or “dreamtime.” In doing so, they can act as a bridge between what is perceived as ordinary reality and other non-ordinary transpersonal realms.

As a result, the ‘wounded healer’—the great global archetype associated with visionary shamanism as a person with acute mental perceptions—is able to ‘bring back’ knowledge and wisdom from outside of our ordinary, three-dimensional, linear space and time. The goal of bringing back this wisdom from dreamtime is to heal and regenerate all of the community on both a spiritual and a societal level. Entering dreamtime is understood as a deeply creative act.

In the Buddhist tradition, Avalokiteshvara, the “Buddha to be” who is worshipped in both male and female forms has vowed to postpone enlightenment until s/he has released all sentient beings from Dukkha, the Sanskrit word for suffering. Suffering in Buddhism is understood as one of the four great Noble Truths. In the Fire Sermons, preached over two and half thousand years ago, the historical Buddha, Siddhartha Gautama, said that we live with delusion or avidya caused by suffering, and as a result we are “burning:”

“The mind is burning, ideas are burning, mind-consciousness is burning … Burning with what? I say it is burning with birth, aging and death, with sorrows, with lamentations, with pains, with griefs, with despairs.”

Hence, suffering and the sadness it brings is a universal part of human experience—a visceral part of who we are at our very core. We can run from this truth if we want to, but it will catch up with us in the end. There is no hiding place, and no amount of 21st century consumption or other distractions will douse our burnings.

Melancholy is a particular kind of sadness, an emotion born of suffering but reflective rather than creating a debilitating depression. It lies somewhere “in the shade between sadness and despair” as Leo Tolstoy put it, “where the possibility of consolation might lie.” Melancholy also has a faint quality of mourning, even a kind of grief, but for what? Our lost innocence? All that is lost in the past, and all that will be lost in the future? The human condition is full of bewilderment, misunderstanding, loss and grief because we will lose the people we love, and because things will not work out in the ways we want, so mourning and regret are inevitable.

As Susan Sontag memorably noted, depression is melancholy minus the charms. Depression paralyses, inflicts inertia and often steals our ability to function; whereas melancholy can act as a creative spur, building a hard won modicum of self-knowledge to draw on. Depression closes out the world and reduces our experiences to the claustrophobic confines of our own heads; whereas paradoxically, melancholy can open up these claustrophobic walls to acceptance and self-knowledge.

If we are to stay sane in the world we must actively seek out this kind of melancholy, for if we don’t we won’t be able to understand ourselves fully. We risk one-dimensionality and superficiality—two of the many curses brought on by 21st century capitalism. This cannot be self-indulgent, nor just another excuse to inflict even more pain on our ‘guilty,’ ‘undeserving’ and unexamined selves.

Thankfully, great art can console us, particularly great music. Music is surely our greatest medium of expression, and if melancholy sometimes feels like a vast enveloping grief, then perhaps music and the consolation it brings can help us to grieve. The melancholic note in popular music—the ‘blue’ note understood by the great African American Jazz artists of the twentieth century—heals, soothes and, if we allow it, can transform our suffering into this kind of knowing and accepting melancholia. Musicians from Bessie Smith and Robert Johnson to Miles Davis, Van Morrison and Lennon and McCartney have all understood this sense of pathos, and have felt and communicated it intuitively.

Take Lennon and McCartney for example. Both were the creative driving force of the Beatles. Perhaps the lonely and aching impulse of two young boys who had lost their mothers produced a symbiotic psychic energy that spurred them to create something remarkable from abrupt and searing pain. But could they have been mining something even deeper? Could emotional trauma have been passed down from earlier generations? And could the same be said of slavery and racism as part of the genesis of 19th and 20th century African American blues? It seems plausible. After all, Smith, Davis, Lennon and McCartney, David Bowie and the rest are surely our culture’s great avatars and shamans. It is they who soothe, guide and enlighten, and make it all worthwhile.

Appreciating great music is not just an intellectual exercise. It is much more than that. We don’t just hear music, we feel it, and in a melancholy state we do so even more intensely. If you haven’t felt music or any other art form with that intensity then Nietzsche was surely right: without that intensity of feeling, life would be a mistake.