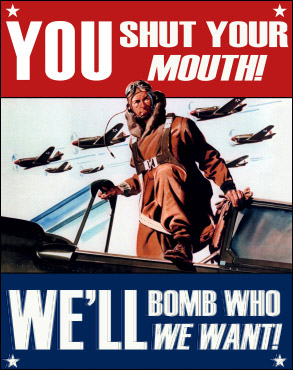 “What I do is I authorize my military. We have given them total authorization…”
—Donald Trump, April 2017

The war strain is strong in both parties.
—Yours truly

Short and impossibly bitter. In all the talk of the multiple domestic disasters that the Age of Trump will usher in — health care destruction, assaults on immigrants, a new surge in death-by-lying-cop, a breaking broken climate, and all the rest — Americans have conveniently forgotten one of the worst, the loosing of our generals and their weapons of war upon the poor and brown of the world.

In short, Donald Trump, with what looks to me like bipartisan consent, has unleasked the dogs of war. That’s my first point in this brief piece. My second point is this: There will be a price, and no one in this country will want to pay it.

The Dogs of War

Tom Englehardt considers my first point in a much longer piece, “The Honeymoon of the Generals.” Near the middle he writes (my emphasis):

Institutionalizing War and Its Generals

Above all, President Trump did one thing decisively. He empowered a set of generals or retired generals—James “Mad Dog” Mattis as secretary of defense, H.R. McMaster as national security adviser, and John Kelly as secretary of homeland security—men already deeply implicated in America’s failing wars across the Greater Middle East. Not being a details guy himself, he’s then left them to do their damnedest. “What I do is I authorize my military,” he told reporters recently. “We have given them total authorization and that’s what they’re doing and, frankly, that’s why they’ve been so successful lately.”

As the 100-day mark of his presidency approaches, there’s been no serious reassessment of America’s endless wars or how to fight them (no less end them). Instead, there’s been a recommitment to doing more of the familiar, more of what hasn’t worked over the last decade and a half. No one should be surprised by this, given the cast of characters—men who held command posts in those unsuccessful wars and are clearly incapable of thinking about them in other terms than the ones that have been indelibly engrained in the brains of the U.S. military high command since soon after 9/11.

That new ruling reality of our American world should, in turn, offer a hint about the nature of Donald Trump’s presidency. It should be a reminder that as strange… okay, bizarre… as his statements, tweets, and acts may have been, as chaotic as his all-in-the-family administration is proving to be, as little as he may resemble anyone we’ve ever seen in the White House before, he’s anything but an anomaly of history. Quite the opposite. Like those generals, he’s a logical endpoint to a grim process, whether you’re talking about the growth of inequalityin America and the rise of plutocracy—without which a billionaire president and his billionaire cabinet would have been inconceivable—or the form that American war-making is taking under him.

And lest anyone be confused, the dogs of war have bipartisan masters:

When it comes to war and the U.S. military, none of what’s happened would have been conceivable without the two previous presidencies.  None of it would have been possible without Congress’s willingness to pump endless piles of money into the Pentagon and the military-industrial complex in the post-9/11 years; without the building up of the national security state and its 17 (yes, 17!) major intelligence outfits into an unofficial fourth branch of government; without the institutionalization of war as a permanent (yet strangely distant) feature of American life and of wars across the Greater Middle East and parts of Africa that evidently can’t be won or lost but only carried on into eternity. None of this would have been possible without the growing militarization of this country, including of police forces increasingly equipped with weaponry off America’s distant battlefields and filled with veterans of those same wars; without a media rife with retired generals and other former commanders narrating and commenting on the acts of their successors and protégés; and without a political class of Washington pundits and politicians taught to revere that military.

In other words, however original Donald Trump may look, he’s the curious culmination of old news and a changing country. Given his bravado and braggadocio, it’s easy to forget the kinds of militarized extremity that preceded him.

The piece is good; I strongly recommend clicking through to read the rest. Get ready for more war; lots and lots of it. Why? Read on.

By his own admission, Paul Wolfowitz, one of the primary neocon architects and prosecutors of George W. Bush’s disastrous Iraq War, has had a long relationship with both Mattis and McMaster and approves of them both. At the moment, both have primary roles in Trump’s foreign war policy, especially in the Middle East, Mattis as Pentagon chief and McMaster as National Security Advisor.

The Mattis and McMaster ties to Paul Wolfowitz go back a long way. From an interview conducted by Politico here’s Wolfowitz talking about Trump’s foreign policy (my emphasis):

Glasser: … You know, there’s no one particular guide except the quirky personality of Donald Trump at times, it seems. How do you navigate understanding who this guy is when it comes to foreign policy?

Wolfowitz: Well, it’s certainly unpredictable, as an understatement. But at the same time you have in his national security team two individuals who are nearly the opposite, who have a long consistent record of thinking clearly, strategically. I’m talking about McMaster and Mattis.

Glasser: Have you talked with anyone in his White House since they have been set up and trying to figure things out?

Wolfowitz: I have some. I know McMaster quite well from before. And Mattis actually was my senior military assistant when I first came to the Pentagon in 2001, and I worked with him quite a bit later on in his various later capacities, including in Iraq. So I know them pretty well, but I haven’t—I’ve occasionally emailed them, but I have not had direct contact with them.

Wolfowitz later describes Mattis as a “peace through strength” advocate … whatever that means. For me, a recommendation from Paul Wolfowitz, who thinks President Obama was not warlike enough, is the Neocon Seal of Approval. Later in the interview, Wolfowitz says of Obama: “Look, my big reservation about Trump, and I said it, was that he was sort of like Obama on steroids, particularly with respect to Russia and Ukraine.”

In other words, weak. Wolfowitz hasn’t changed his stripes. And there’s certainly no question, based on the rest of the interview, that Wolfowitz still wants regime change in Syria, and also that he thinks McMaster and Mattis will bring it.

By the way, General McMaster is the author of the obviously false White House Intelligence Report that justified, after the fact, his Tomahawk attack on Syria. Details here and here. He’s off to a fine Wolfowitzian start.

The War Will Come Home

To my second point, that America’s endless war — and seemingly endless love of war — will come home at last, consider two points.

First, the war strain is strong in both parties. In modern times it runs nearly unchecked through the last three generations, starting with the immediate aftermath of WWII and Truman deciding to “scare the hell out of the American people” and not stand down the war machine. Or even earlier, when according to Gore Vidal, Truman dropped the bomb on Japan despite the fact the Japanese were actively trying to surrender, because he wanted to “send a message to Joe [Stalin].”

​​Americans experienced one moment of revolt against the well-greased, well-glorified, bipartisan war machine​​ — during the Vietnam War, when almost everyone knew someone whose life was at risk due to the draft. In those years, the war “came home” in the sense that people feared for their personal future or the future of those in their immediate circle. Since then, with the all-volunteer army, nada.

But second, what if these wars “come home” in spades via bombings at home, followed by the typical American response, self-righteous “muscular security” in the frighteningly named “homeland”? We will likely never recover from that twin blow.

For example, imagine the Mall of America blown up at Christmas, along with two or three others. What does security look like in every mall in the country after that? Does going to the mall look like going to the airport, or worse? And if malls in America do look like the airport, will Americans grow to hate their new life or accept it? Will they stand down their international violence or launch even more of it, retaliating with a literal vengeance?

Whatever the response, for the second time in this still-new century the country will have turned a corner it can never turn back to, and life in America will once more never be the same. If we don’t stop these wars, we will soon be in them in full, the way Europe is in them, with a battlefield locally, not just overseas.

As I said above, there will be a price for America’s endless war, and no one in this country will want to pay it.

By then, of course, it will be too late. We’ll have eaten the meal; all that will be left is the bill. Or to change the metaphor, the generals will have had their honeymoon. The rest of will be left to live in the marriage they created.