In 2015, a federal rail agency authorized the Alaska Railroad Corporation to ship its first batch of liquefied natural gas (LNG) by rail in Alaska, but granted this permission behind closed doors, according to documents obtained by the Center for Biological Diversity (CBD) and provided to DeSmog.

The documents, a series of letters and legal memoranda obtained through the Freedom of Information Act (FOIA), show that the Federal Railroad Administration (FRA) may have violated the National Environmental Policy Act (NEPA) by permitting the shipping of LNG, a highly combustible and flammable material, via rail without any public notification or comment period. The agency granted the Alaska Railroad Corporation a legal exemption under 49 C.F.R. § 174.63(a).

That federal statute mandates that a “carrier may not transport a bulk packaging … containing a hazardous material in container-on-flatcar (COFC) or trailer-on-flatcar (TOFC) service … unless approved for transportation by” the FRA.

The Association of American Railroads (AAR), a rail industry lobbying group, has since petitioned the FRA for the ability to ship LNG tankers by rail (as opposed to containers or trailers on flatcars), filing the request on January 17, according to documents on file at Regulations.gov.

“AAR petitions for rulemaking to authorize the transportation of methane, refrigerated liquid (“LNG”), by rail in … tank cars,” reads the AAR petition. “LNG should be authorized for rail transportation because it is a safe method of transporting this commodity, LNG shippers have indicated a desire to use rail to transport it, and because railroads potentially will need to transport LNG for their own use as a locomotive fuel.”

In its petition, AAR — whose members include nearly all of the major rail companies — says that natural gas companies want to explore transporting LNG by rail in various regions around North America.

“Notwithstanding the requirement for a special approval, customers have expressed interest in shipping LNG by rail from Pennsylvania to New England, and between the U.S. and Mexico,” wrote AAR. “Authorizing transportation of LNGby rail likely would stimulate more interest.”

As previously reported by DeSmog, much of the natural gas currently obtained via hydraulic fracturing (“fracking”) currently has no delivery mechanism, due to lack of both pipeline capacity and current legal authority to ship it on freight train tank cars. Alaska, home of the first operational LNG-by-rail market, currently is seeing a nascent push for fracking.

On February 9, the FRA acknowledged in a letter that it is currently reviewing AAR‘s petition, although it refers to the petition being filed January 13, not 17. Robert Fronczak, an AAR executive and author of the petition to FRA, did not respond to a request for comment. 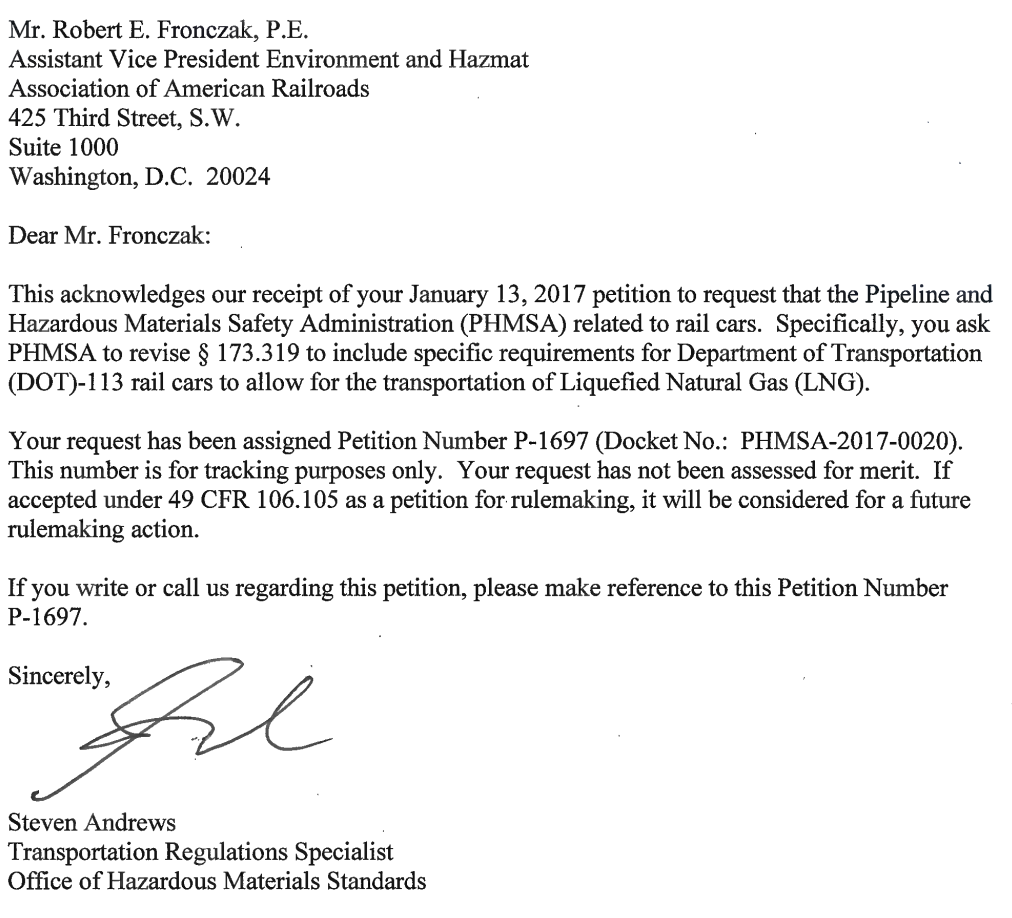 The current push to transport LNG by train in Alaska appears to begin with a November 14, 2014 letter written by Alaska Railroad’s Chief Operating Officer, Doug Engebretson, to the FRA. In the letter, the State of Alaska-owned company declared its desire to ship LNG by rail due in part to the state’s inadequate road system compared to its rail network.

“The Alaska Railroad serves the State of Alaska with approximately 611 miles of track and siding that extend from the southern port town of Seward, Alaska, to the northern terminus at Fairbanks, Alaska,” wrote Engebretson in the letter.

“Also unlike most locations in the Lower 48, the road system in Alaska is, at best, limited. In the 663,267 square-mile area of the state, there are only 4 limited roads on the interstate highway system, for a total of only 1,081 miles,” Engebretson continued. “Thus, the Alaska Railroad serves as a major transportation link among the more populated areas of the state, the only transportation provider for some remote areas, and a critical source of freight and other goods for areas that are not served by roads at all.” 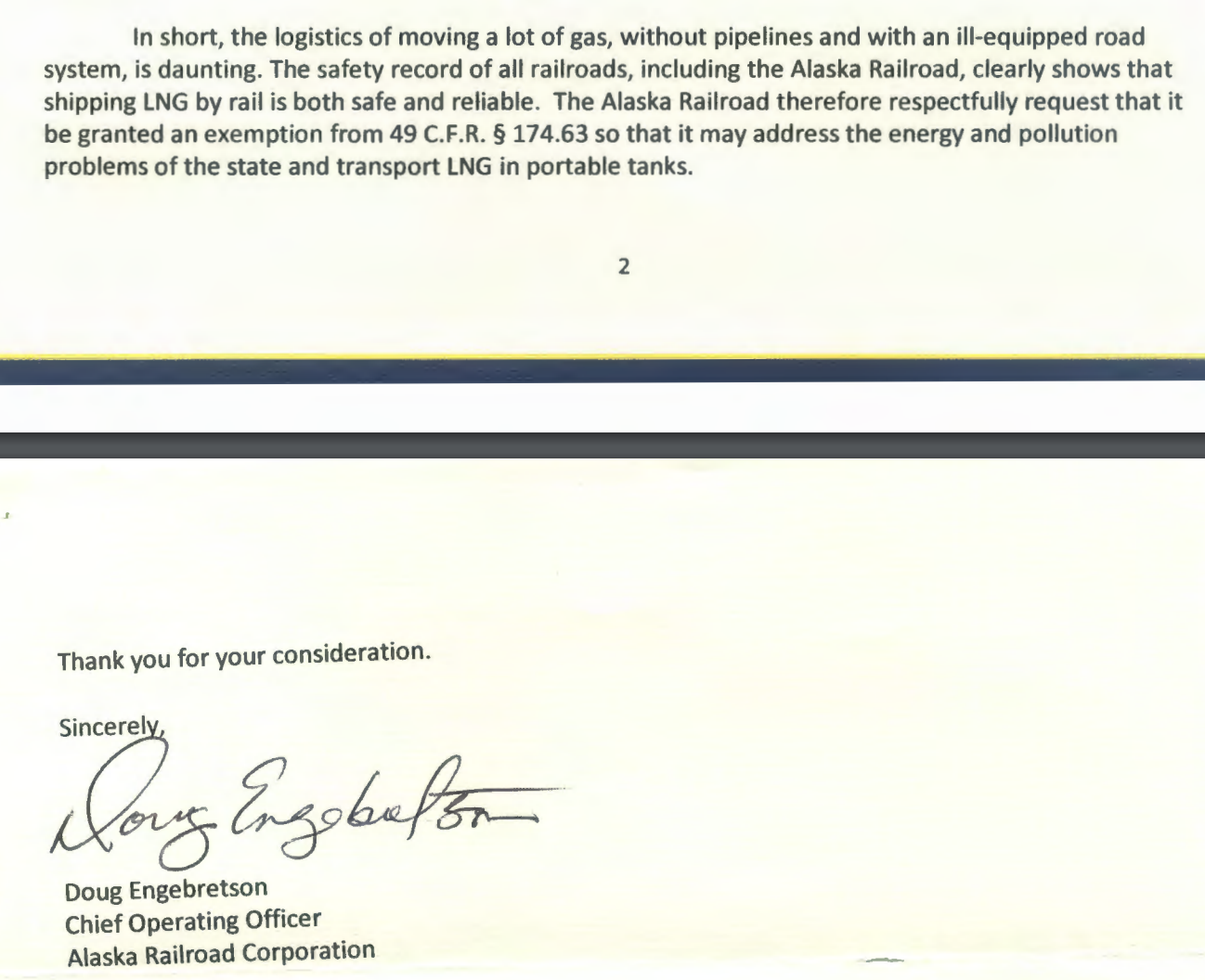 On February 6, 2015, Engebretson wrote a follow-up 17-page legal memorandum to the FRA seeking legal authority to ship LNG on Alaska Railroad’s trains. In its legal petition, the company asked for permission to allow two LNG-loaded trains, each 30 to 70 cars in length, on the rails per week.

Later that year, FRA‘s Associate Administrator of Railroad Safety, Robert Lauby, responded to Engebretson in an October 9, 2015 letter, authorizing the shipment of LNG on two freight trains per week. Lauby also laid out a list of 11 conditions to follow, which included allowing the company to conduct safety inspections and report them to FRA, instead of having the federal agency directly involved in inspections.

The original FRA permit allowed Alaska Railroad to ship LNG by rail for two years, with the permit expiring in October 2017. But a month later, Lauby wrote a November 2, 2015 follow-up to Engebretson, now granting Alaska Railroad the ability to ship three LNG trains per week until December 2020. The documents do not make clear what prompted FRAto take such an action.

Credit: Office of the Clerk, U.S. House of Representatives

Alaska Railroad, led by Scontras and Zane, has continued to lobby in support of LNG by rail ever since the third quarter of 2015. The company’s first batch of LNG officially hit Alaska’s tracks in September 2016, which has led to concerns from environmental groups.

“A derailment or natural-gas explosion would devastate Alaska’s communities and wildlife. Our salmon and herring runs and impacted wildlife have never fully recovered from the Exxon Valdez spill, and that was almost 30 years ago,” Dune Lankard, Alaska representative for CBD, said at the time in a press release. “Alaskans deserve more than to be guinea pigs for the LNG industry.”

What is apparent from the documents obtained by CBD is that neither the public nor any other stakeholder besides Alaska Railroad appears to have been consulted on the proposed approval to move LNG by rail.

And that, in turn, may have been a violation of the National Environmental Policy Act, or NEPA, according to critics. Another question raised by project opponents is why NEPA does not appear to have been applied at all.

Normally, major infrastructure project proposals trigger a governmental review process under NEPA, which allows citizens, environmental groups, industry groups, and other interested parties to weigh in on the proposal either in comments, through public hearings, or sometimes both.

After all, as Alaska Railroad’s legal petition pointed out, along the 611-mile-long trip between Seward and Fairbanks, LNG-loaded trains would pass through Anchorage, Alaska, which has a population of over 300,000 people and is the most populous city in the state.

The NEPA process culminates with a federal agency producing either an environmental assessment or a more detailed environmental impact statement (EIS) on the proposed project, which recommends either approving or rejecting it.

NEPA, then, was apparently not in play for the LNG-by-rail authorization in Alaska, though the reasoning for this is not clear at this time. However, this national environmental law likely will take effect if AAR‘s petition for rule-making process proceeds, which seeks a regulatory system allowing LNG shipments by rail tank cars on a national scale.

“NEPA requires environmental analysis for all federal actions (involving approval of specific projects) with the potential to significantly affect the quality of the environment,” Steve Jones, a CBD media specialist, told DeSmog.

“I would say authorizing the transport of LNG by [Alaska Railroad] is a ‘major federal action’ [as defined under NEPA] with potentially significant environmental effects that is subject to NEPA and FRA should have done an environmental assessment to determine whether a full-blown EIS was necessary,” Pat Parenteau, a law professor at Vermont Law School and former Director of Vermont Law School’s Environmental Law Center, told DeSmog.

“I am not aware of any exemption from NEPA requirements for this type of authorization. If the FRA is claiming such an exemption, I would like to see what it is based upon.”

At this point, however, neither CBD nor any other group can file a NEPA lawsuit against the FRA for Alaska Railroad’s LNG-by-rail permit. The statute of limitations expired 60 days after FRA‘s unpublicized November 2, 2015 letter to Alaska Railroad.

When reached for comment, FRA pointed DeSmog to the Pipeline and Hazardous Materials Safety Administration (PHMSA). A PHMSA official told DeSmog there is no timeline for when it will decide whether to grant AAR‘s petition to allow LNG-by-rail tank car shipments permanently and outside of Alaska. Alaska Railroad officials did not respond to a request for comment.

“As if outdated rail cars carrying volatile crude oil didn’t pose enough of a danger to the tens of millions of Americans who live and work … near our country’s rail lines, the railroad industry is now quietly seeking permission to transport explosive LNG through our communities,” Ross Hammond, U.S. campaigns director for Stand.earth, told DeSmog. “First responders, public officials, and communities along the rail lines will need to raise hell if there’s any hope of stopping this.”