Most auto industry gurus were once again too optimistic with their dreary forecasts for new vehicle sales in the US. Kelley Blue Book had figured they’d drop 3.1% in April year-over-year to 1.45 million units. Forecasts in terms of the seasonally-adjusted annual rate of sales – a key industry metric – ranged from 16.9 million SAAR at Baum & Associates and at Goldman Sachs to 17.5 million SAAR at LMC Automotive. The analyst average forecast was 17.1 million SAAR, down 0.35% year-over-year.

But customers were under sticker shock, and were hobbled by other issues, and what the auto industry produced was this:

So April had one fewer selling day than April 2016, but this didn’t come as a surprise to forecasters. And SAAR accounts for it.

Note: These are unit sales (deliveries) by franchised dealers to their customers, and by manufacturers to large fleets and to their own employees under their employee programs.

A 4.7% drop in sales, bad as it is, wouldn’t qualify for #carmageddon. These things happen. But here’s the thing: Automakers had shelled out $3,465 in incentives per new vehicle sold, on average, according to TrueCar estimates. A record for the month of April. It beat the prior record of $3,393, set in April 2009. It amounts to about 10% of suggested retail price, similar to March. The last period when incentive spending was at this level of MSRP was in 2009 as the industry and sales were collapsing.

The #carrmageddon point to watch: despite the 13.4% year-over-year surge in incentive spending to nearly $5 billion, total vehicle sales fell 4.7%! When these massive incentives fail to even slow the sales decline, serious problems lurk beneath the surface. 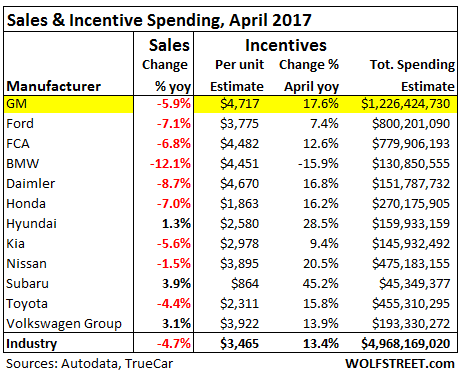 “When you look at the broader economy, including a strong job market, rising wages, low inflation and low interest rates, and couple them to low fuel prices and strong consumer confidence, you have everything you need for auto sales to weather headwinds and remain at or near historic highs.”

And bloated inventories are hounding the automakers. According to WardsAuto.com, there were over 4 million new vehicles sitting on dealer lots and increasingly on rented parking lots at zombie retail malls. April was the fourth month in a row with dealer inventories above 4 million. The last time this happened was in 2004!

The situation of ballooning inventories, massive incentives, and falling sales is confronting automakers with tough decisions – and there are no good options: pile on even more incentives, only to see sales decline further and gut profits, which is what happened leading up to the collapse of the industry during the Great Recession; and/or cut production and deal with the fallout; or cut incentives, fasten the seatbelts, and hang on.

Consumers are now getting accustomed to these incentives, some of them reaching $8,000 or more per vehicle. Without them, consumers would just say no. Incentives are addictive. You cannot just withhold that drug. It would crush sales. That’s why it is so difficult for automakers to get off incentives once they got on them in a big way.

A number of automakers didn’t make the above list because their market share is too small, including Volvo, Mazda, Porsche, Jaguar, Ferrari, Maserati, and Tesla.

So it’s tempting to short Tesla even as the bloodletting among Tesla shorts has become legendary. Read….  4 Short Sellers Explain Why They Target Tesla – But Don’t Try to Do this at Home