Institutional investors that manage other people’s money grabbed subprime auto-loan backed securities because of their slightly higher yields. These bonds are backed by subprime auto loans that have been sliced and diced and repackaged and stamped with high credit ratings. But those issued in 2015 may end up the worst performing ever in the history of auto-loan securitizations, Fitch warned.

And then there are those issued in 2016. They haven’t had time to curdle.

The 2015 vintage that Fitch rates is now experiencing cumulative net losses projected to reach 15%, exceeding the peak loss rates during the Financial Crisis.

Fitch Ratings’ Auto Loan Annualized Net Loss Index shows the strong seasonality, with either May or June forming the low point each year and the winter months forming the peaks. A terrible trend took off in 2014. The winter peak last year occurred in November with a net annualized loss of 10.9%. The latest data point is for April, at 7.8%, up from 7.4% last year. The index peaked in February 2009 at 13.1%. The trend is pointing that way (via Fitch Ratings ABS): 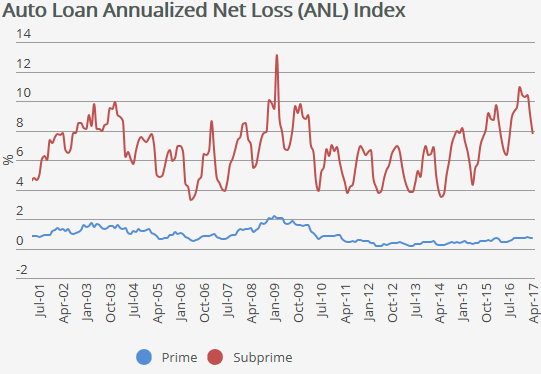 The 2015 vintage has been prone to high loss severity from a weaker wholesale market and little-to-no equity in loan contracts at default due to extended-term lending, a trend which was not as apparent in the recessionary vintages.

Why is negative equity such a growing phenomenon? Because of the toxic trifecta in the auto industry, now happening.

The value of a new vehicle declines sharply over the first few years. But the loan doesn’t amortize at this pace and doesn’t catch up with the dropping value of the vehicle until the later stages of the loan. As many consumers like to get a new vehicle every few years, these longer terms add to the negative equity at trade-in time.

Falling used-vehicle values. The seasonally adjusted Used Vehicle Price Index by J.D. Power Valuation Services (formerly NADA Used Car Guide) in May has declined for the 10th month in a row, now down over 13% from its peak in mid-2014 and at the lowest level since September 2010 [Used Vehicle Trade-in Values Sink, Hit New Vehicle Sales].

These factors, along with aggressive lending, propelled new vehicle sales to new records in 2015 and (barely) in 2016. But now the blowback has started. The net effect going forward translates into greater losses for lenders and investors in case of default after the car is repossessed and sold, and ultimately – now happening – lower sales for automakers.

For now, downgrades of subprime auto-loan backed securities are still modest. Ratings agencies cite structural enhancements, such as the slices that take the first loss and that have been retained by the lender. Investors that bought the highly rated slices might be spared initial losses. If losses continue to surge, even highly rated slices are starting to take losses.

But auto lenders that sold the subprime securities are starting to get hit. Fitch warns particularly about those that have sprung up since the Financial Crisis and have specialized in subprime auto loans, using looser underwriting standards. Lending by these weakly capitalized lenders has grown at magnificent rates in recent years. Some of those lenders have specialized in “deep-subprime” auto loans. And those lenders might be at risk.

And at least one of them, Santander Consumer USA, the top subprime auto lender in the US, verified income on only 8% of the loans, according to Moody’s. So here we go again. Read… Liar Loans Dog Subprime Auto-Loan-Backed Securities