Your weight can affect how “American” you look Quartz (resilc)

Three things to know about North Korea’s missile tests Aljazeera. Micael: “…”could potentially hit the US base on the island of Guam as well as Alaska, although the naval base on Hawaii and the rest of the continental US are still out of reach“.”

US to N Korea: We’re not your enemy BBC

Letters from India: How Bad Can the Crackdown on Cash and Tax Evasion Get? What’s Next? Michael Shedlock (EM)

>One Year On From the Brexit Vote

Oliver Wyman. Estimates 31,000–35,000 job losses in the financial services industry. Would be nice to know what % of total financial services employment that represents. Does not add in related shrinkage in support services (lawyers, accountants).

UK voters believe economic damage is price worth paying to get their way on Brexit Politico. Be careful what you wish for. The old saying goes something like: “A recession is when your neighbor loses his job. A depression is when you lose your job.” And amusingly, the polls answers reflect that too.

Blair escapes prosecution for the invasion of Iraq. What now for accountability? Middle East Eye (micael)

Can the US defeat the Taliban in Afghanistan? Aljazeera (micael)

Yemen: more than one million children at risk of cholera – charity Guardian

Sanctions, smoke and mirrors from a kindergarten on LSD The Saker

Amazon Echo can be turned into a spying device, security researchers reveal AndroidGuys. Chuck L: “Apparently the vulnerability has been fixed on the 2017 version of the device, but owners of earlier ones should heed this advice:”

…in order to successfully hack the speaker, a hacker would need to have physical access to it. So you might want to lock your Amazon Echo away when your computer wiz cousin comes over for a visit. . . the attack can be carried out by removing the Echo’s rubber base to reveal 18 debug pads which can be used to easily debug the device. From there, hackers would be able to boot directly into the firmware by attaching an SD card or install malware without leaving any actual physical traces.

US lawmakers are trying to fix the security nightmare that is the ‘internet of things’ Business Insider (David L). It’s not fixable. For starters, manufacturers go out of business and there is no one to continue to be responsible for the device. And notice the article insisting we must submit to having spying devices. I’m going to continue to buy stupid devices. In fact, given the tone of this article, enterprising readers with attics should stock up on non-IoT-infested devices (anything that runs off electricity is expected to be chipped someday) for their own use and perhaps future sale. Or you could figure out how to turn your entire home into a Faraday cage and engineer carveouts for select devices.

Republicans grow less fearful of defying Trump Financial Times. Erm, were they ever following him?

Jeff Sessions isn’t bringing back the war on drugs. That’s because it never ended. Slate

Covered California premiums will rise 12.5%, and Anthem Blue Cross cuts coverage Los Angeles Times. Jessmoney: “Blue Crucifix is abandoning ACA market in most CA counties next year; others raising rates ave 12.5%. Looks like Trump was right; all he has to do is wait for Obamacare to implode.”

GOP chairman opens door to Democrats on ObamaCare The Hill

Lawsuit Alleges Fox News And Trump Supporter Created Fake News Story NPR (furzy, JohnnyGL). Lambert provided the AP version if you want to not feed NPR page views. I need to read the filing but I can’t imagine what legal theories they are relying on. Businesses plant BS stories all the time. A big proportion of scientific studies are garbage (as in not just by being badly designed but by virtue of the funders wanting certain types of positive findings and the researchers finding a way to oblige). If the standards presupposed by this suit were actually observed, the volume of “news” stories would shrink by a bare minimum of 40%.

And separately, by now everyone who has heard of the Seth Rich story has their priors. So trying to debunk it by this peculiar route not going to convince anyone who thinks the official story didn’t add up, and it has the added PR negative of reviving the story. Although it may give Google justification for downgrading Fox News in its next algo redo.

Pulitzer-Prize Winning Reporter: FBI Report Shows It Was Seth Rich – Not Russians – Who Gave DNC Emails to Wikileaks George Washington. Note Lambert is nervous about the ongoing row over Seth Rich because the folks who are pushing the anti-party line side on the whole don’t have good track records as far as care with accuracy is concerned. And he was worried in particular about the audio that George Washington relies upon, since audios can be faked. So I’d treat this with caution until Hersh confirms it or publishes something generally consistent with this interview. Recall how Dan Rather got ruined by relying on a fake document which contained underlying information that was accurate, and the fact that the document was fake successfully created the impression that the story it told was inaccurate.

Capitalism’s excesses belong in the dustbin of history. What’s next is up to us The Guardian (resilc)

Not fare: how Uber drivers gang up to exploit passengers The Times

Antidote du jour. From aleric over the weekend:

The bees have finally returned to my garden in large numbers! I took these pictures this morning on my giant hyssops… 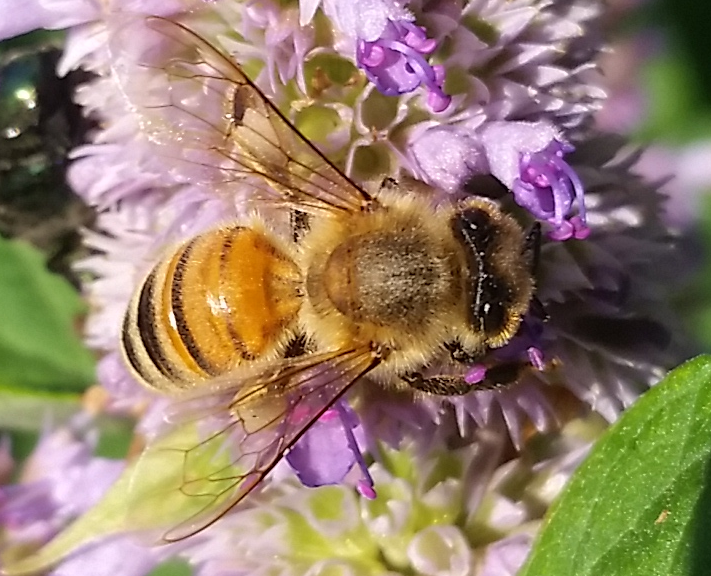