I’ve had a reversal with my eyesight. I seemed to be pretty much over my eye injury and resulting cornea edema. However, today my vision in my dominant eye has gotten blurry enough that I am again finding it hard to read, even when increasing the font size in my browser. Note the doctors seem to think there is nothing to do but let the eye recover on its own. So please forgive the lack of posts by me.

Note a point made in passing towards the end of this post, which strikes me as important: diversified investors don’t have incentives to discipline monopolists. If the monied types spread their chips out widely enough, they’ll benefit from whoever comes out on top.

By Silvia Merler, an Affiliate Fellow at Bruegel and previously, an Economic Analyst in DG Economic and Financial Affairs of the European Commission. Originally published at Bruegel

Plenty of recent research has highlighted a rise in concentration in the US economy, across different sectors. Economists are now wondering to what extent this is attributable to a shift in the antitrust enforcement philosophy. We review contributions to this debate.

In a new paper in the Washington Center for Equitable Growth’s series on antitrust policy, John E. Kwoka of Northeastern University documents the rise in concentration and examines the evidence for one possible explanation: the change in merger enforcement policy at the Federal Trade Commission (FTC) and the Antitrust Division of the U.S. Department of Justice.

Examining FTC merger enforcement data from 1996 through 2011, Kwoka finds that merger enforcement narrowed its focus to mergers at the very highest levels of concentration and adopted a more permissive stance. His examination of the data reveals that (i) enforcement rates for mergers that would result in four or fewer significant competitors slightly increased from 1996 through 2011, but (ii) enforcement for mergers that would result in more than four remaining significant competitors literally ceased after 2007 (Figure 1). 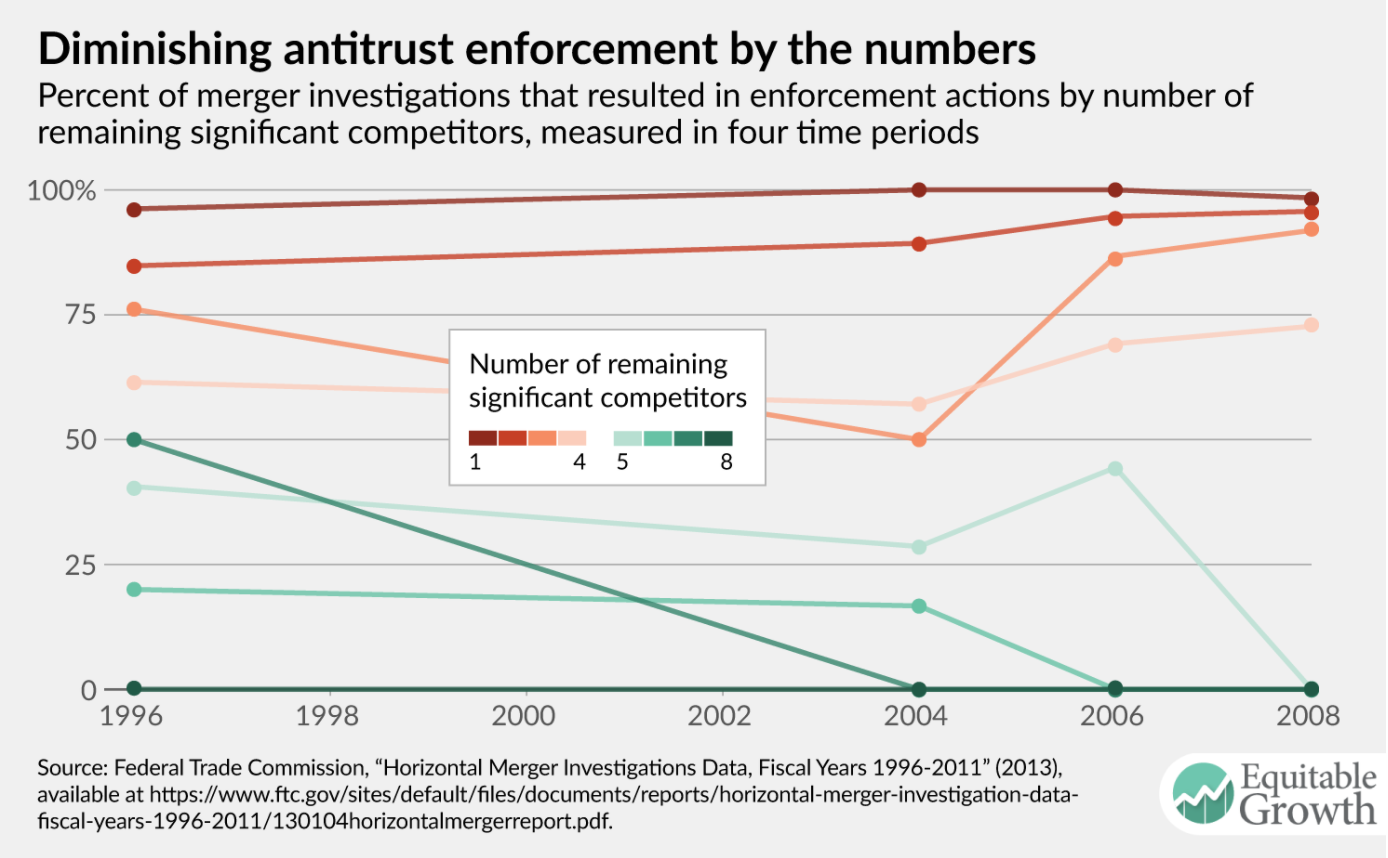 Kwoka argues that the reason for this is to be found in a changing antitrust policy’s presumptions about the competitive consequences of increases in concentration. Over the past 50 years, that presumption shifted from the viewpoint that even modest increases in concentration would result in above-competitive prices and profits, to one in which it was believed that tougher merger standards sacrificed cost efficiencies, which presumably would be passed onto consumers. While antitrust policy has moderated from this original “Chicago school” view, the FTC enforcement data from 1996 through 2011 nonetheless demonstrate that there has continued to be a shift away from merger enforcement actions outside the most concentrated markets.

Some previous research by Kwoka himself had tried to establish the level of concentration at which anti-competitive outcomes become nearly certain. He found that in mergers that resulted in six or fewer significant competitors, prices rose in nearly 95 percent of cases. For mergers with a greater number of remaining competitors, the percentage that were anti-competitive fell off steadily, suggesting that a presumption against mergers in the range of six or five, competitors would make few errors. It is therefore  notable that enforcement policy has shifted to permissiveness precisely in this range of five to seven significant competitors.

Autor, Dorn, Katz, Patterson and Van Reenen look at concentration changes throughout the U.S. economy from 1982 to 2012. They develop three different measures of concentration for 676 industries in six broad sectors, both for purely U.S.-based firms and after controlling for imports, and find a remarkably consistent upward trend in concentration in each sector. Four-firm concentration, i.e. the share of industry revenues controlled by the largest four firms, rose from 38 percent to 43 percent in manufacturing, from 24 percent to 35 percent in finance, from 11 percent to 15 percent in utilities, from 29 percent to 37 percent in retail trade, and from 22 percent to 28 percent in wholesale trade (Figure 2). 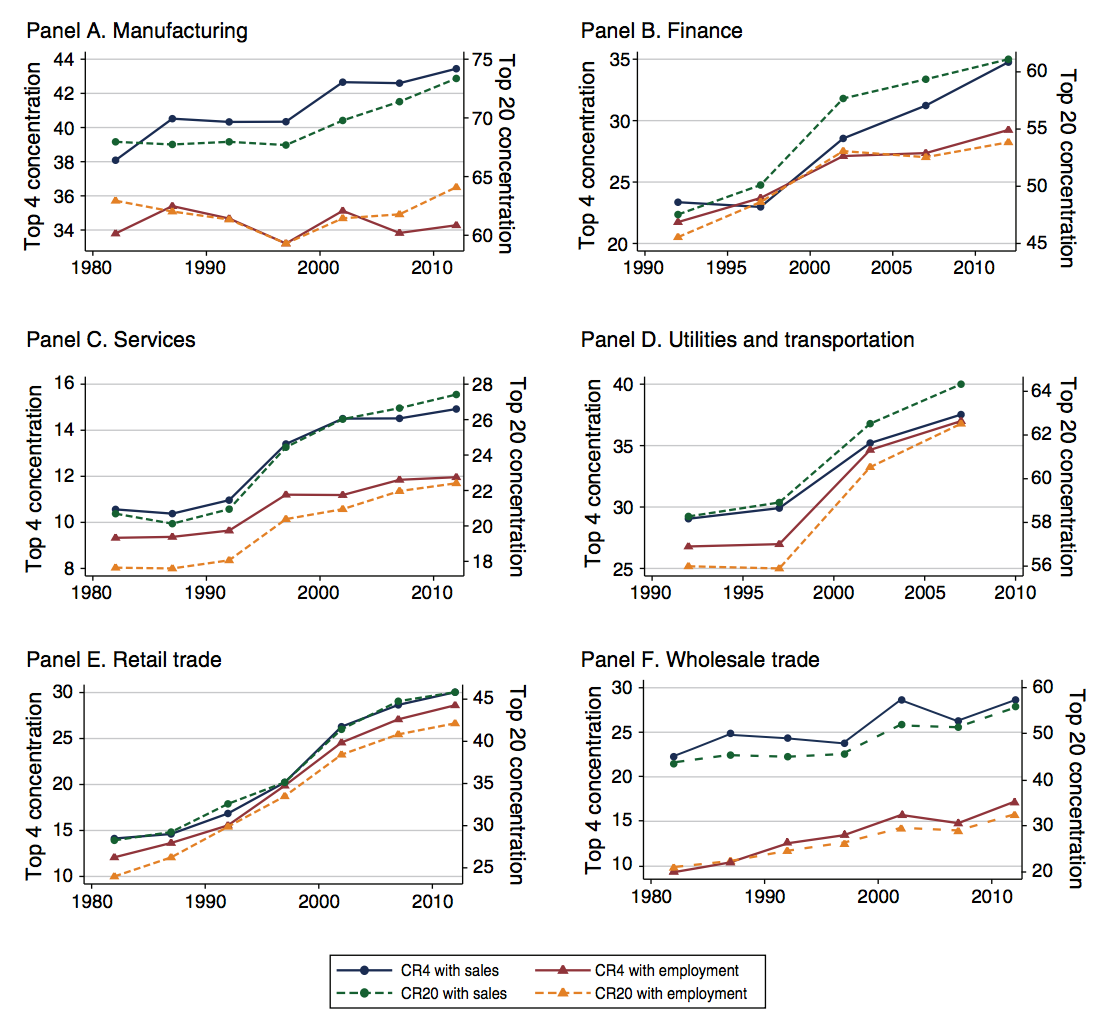 Grullon, Larkin and Michaely look at stock market data on publicly traded firms aggregated to their respective industries and reports on changes in concentration measured by the Herfindahl-Hirschman Index, over the past 40 years. They find that more than 75% of US industries have experienced an increase in concentration levels over the last two decades. Firms in industries with the largest increases in product market concentration have enjoyed higher profit margins, positive abnormal stock returns, and more profitable M&A deals, suggesting that market power is becoming an important source of value. They argues that lax enforcement of antitrust regulations and increasing technological barriers to entry appear to be important factors behind this trend (Figure 3). Overall, our findings suggest that the nature of US product markets has undergone a structural shift that has weakened competition. 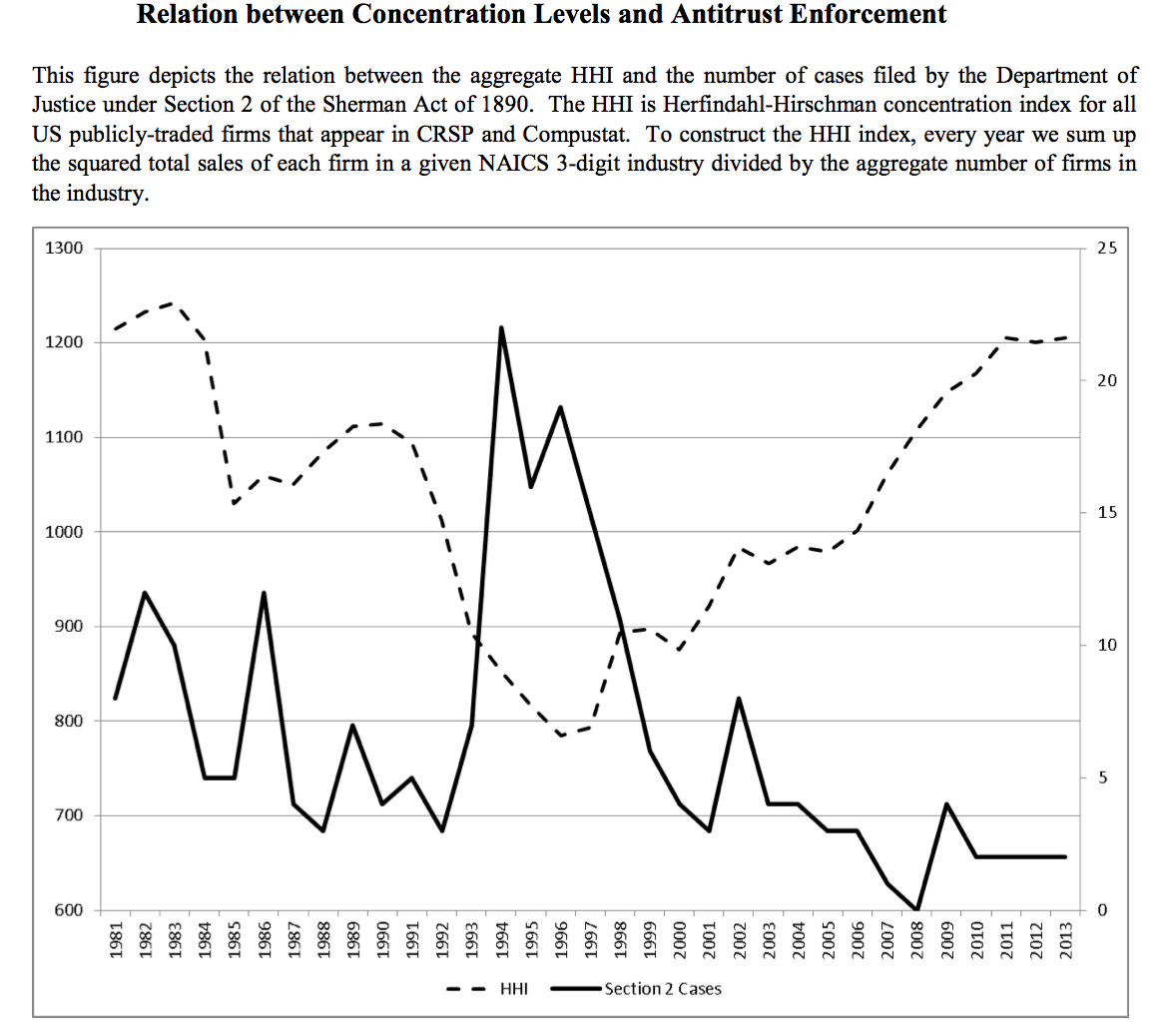 Khan and Vaheesan look at the role of monopoly and oligopoly power in the context of economic inequality, arguing that there is reason to believe the pervasive market power in the economy has contributed to the high level of economic inequality in the United States today. Given the general affluence of shareholders and executives relative to consumers – as well as the power dynamics within large companies – we can expect market power to have significant regressive distributional effects. Case studies of anticompetitive practices and non-competitive market structures in several key industries illustrate how large firms have come to dominate the U.S. economy. Additionally, monopolistic and oligopolistic companies translate their economic power into political influence, often successfully pushing for laws and regulations that further entrench their position and transfer wealth upwards. They argue that the prevalence of market power in the economy today was not inevitable, but is the product of an intellectual and political shift in the 1980s that dramatically reoriented and narrowed the goals of antitrust law.

Jonathan Baker argues that the surprising conjunction of the exercise of market power with well-established antitrust norms, precedents, and enforcement institutions is the central paradox of U.S. competition policy today. Baker argues that this is due to insufficient deterrence of anticompetitive coordinated conduct and insufficient deterrence of anticompetitive mergers between rivals as well as of anticompetitive exclusion. Additional reasons for concerns are the fact that market power is durable, the increased equity ownership of rival firms by diversified financial investors, the rise of oligopolies and of dominant information technology platforms and the decline in US economic dynamism in the past few decades. He also argues that governmental restraints on competition appear to have grown. These include more extensive occupational licensing, growth in the scope of what may be patented, along with an excessive number of patents improperly granted as a result of inadequate review of patent applications.