In our last chapter of the shaggy dog tale of CalPERS’ election fiasco, we recounted how board candidate Margaret Brown had made a field trip to CalPERS’ election vendor, Integrity Voting Systems, a division of K&H Printing, to see what they were doing with the ballots in the CalPERS election. The majority of ballots are mailed in; CalPERS also allows for voting online and by phone.

As we’ve discussed, CalPERS’ new election procedures have fundamental flaws. Among other things, CalPERS violated the California law by making it possible to identify how individuals voted. The ballots proper have to be signed for the vote to be deemed countable, plus every ballot has a bar code linked to a specific individual. CalPERS is also using online voting, which California election statutes prohibit.

Brown’s site visit uncovered even more problems. The ballots are not being held securely (they were in a room with the door propped open and were not locked up overnight). They are being processed before the election has concluded, which is a violation of CalPERS’ own regulation (the rule it passed, supposedly in accordance with California law, except it isn’t since it explicitly provided that the paper ballots themselves be signed).

The fact that IVS is scanning ballots on a daily basis and deciding what to do with ballots that get mangled or are marked in a way that the scanners don’t register means that votes are not being tabulated in public at the end of the election as CalPERS’ regulation stipulates. Remember the hanging chads in Florida in the 2000 Presidential election? One of the most important parts of election monitoring is to have third parties review how ballots that aren’t cleanly marked to see if the voter intent can be inferred and the vote included in the tally. Processing ballots daily makes public tabulation impossible. That is presumably a feature, not a bug.

Brown wrote a letter to CalPERS CEO Marcie Frost and board describing some of the violations of law and procedural problems she had found. CalPERS then held a meeting with the election subcontractors and the candidates, supposedly to assuage the candidates’ concerns. As we described, not only were there way many embarrassed silences but CalPERS and the vendors also told several obvious lies, from which they had to retreat.

After the meeting, another board candidate, Michael Flaherman, wrote a letter to Marcie Frost describing in detail why CalPERS election procedures violated the state constitution, election laws, and CalPERS’ own regulation. We’ve embedded his letter below and strongly encourage you to read it in full.

Flaherman also explained why the changes in election procedure, which were just implemented, look like vote suppression, aimed most of all at active employees who are union members. They would have reason to fear retaliation if they voted against the candidate their union recommended and union supervisors could find out how they had voted.

Why is this line of thought plausible? Consider this section of a transcript from a CalPERS board meeting in August 2016, when the first version of the change in CalPERS voting procedures was presented to the board (emphasis ours):

Operations Support Services Division Chief Kim Malm: At this time, I’d like to take a minute of personal privilege, Mr. Chair. I’s like to thank the staff that have worked really hard on this over the last couple of years. Anthony Martin, Christina Nutley, Nina Dinsdale, and Dallas Stone from my staff. Also Erin Lopez and Renee Salazar from the Legal Office, and also Public Affairs. We would not have been able to do this without them, in addition to the constituents that have been extremely supportive over the last couple of years. And especially Dave Low and Terry Brennand who kind of got this in front of some people – important people to help us push this forward. So I’d like to say thank you to all of them, in addition, of course, to my Executive, Doug Hoffner and the Board.

David Low is the executive of California School Employees Association. Terry Brennand is the pension director for SEIU. Pray tell, why are senior union officials permitted to have behind-the-scenes influence on how CalPERS runs elections? And worse, why did David Low think he had the right to participate in the meeting with the candidates on September 20 about the election procedures? The union backed candidates, David Miller and incumbent Michael Bilbrey, blew that meeting off. But Low tried to dial in. He wasn’t allowed to participate but CalPERS’ head of media relations, Brad Pacheco, said he’d brief him later. Rest assured that no ordinary CalPERS beneficiary who’d tried to join the meeting would have been extended that courtesy.

In the interest of not taxing reader patience, we have omitted some other glaring problems. For instance, the fact that Everyone Counts, the vendor for online voting (which remember is illegal in California) has run elections for mere neighborhood councils in Los Angeles that were fiascos and that Everyone Counts’ phone number for the CalPERS election (for phone voting, getting replacement ballots, and other questions) is manned by people working out of their homes who have access to the full CalPERS election database….and some, perhaps all, are contractors, not employees. Please read our earlier post or Flaherman’s letter below for more unsavory details.

Recall that Candidate Brown visited IVS in Everett, Washington, which is where CalPERS beneficiaries are mailing completed ballots. IVS has been opening the envelopes as they come in, scanning them, and adjudicating them every business day. IVS told Brown then that they were not counting votes, that that would be done by Everyone Counts at the end of the election. The IVS employees also stated that Everyone Counts did everything online and had no equipment for processing paper ballots.

Consider how this conflicts with CalPERS’ own regulation:

On the date specified in the Notice of Election at the location designated by CalPERS, the validated paper ballots shall be tabulated publicly by an independent, neutral agent appointed by CalPERS for that purpose.

It is clear that:

1. The paper ballots are to be “tabulated”. That means the ballots proper, not scanned images.

But CalPERS and its vendors have given four stories so far, and a new story is due out at 9 AM on Friday.

First story: images would be sent to Everyone Counts to be tabulated. This is what IVS told Candidate Brown and her witness during her site visit in Everett, Washington. The IVS representatives were quite insistent that they weren’t counting the votes, even though the equipment they were using for processing the ballots was not only capable of recording the votes, that was clearly its main use and the image retention was for audit purposes.

Note that this procedure obviously does not comply with the regulation.

Second story: ballots would be counted at IVS in Washington. In the meeting among CalPERS, its election contractors, and the candidates on September 20, Brown asked where she should go to view the ballots being counted. She was then told in Washington. She pointed out that that wasn’t what she was told earlier, that she’d been informed that the images would be sent to Everyone Counts, tabulated there, and those results combined with the phone and online totals. She got a long silence. CalPERS general counsel Matt Jacobs then said he’d have to get back to the candidates.

The candidates had to ask repeatedly for information as to where they should go at the end of the elections to view the tabulation of the paper ballots. It took a whole week to pry an answer out of CalPERS. 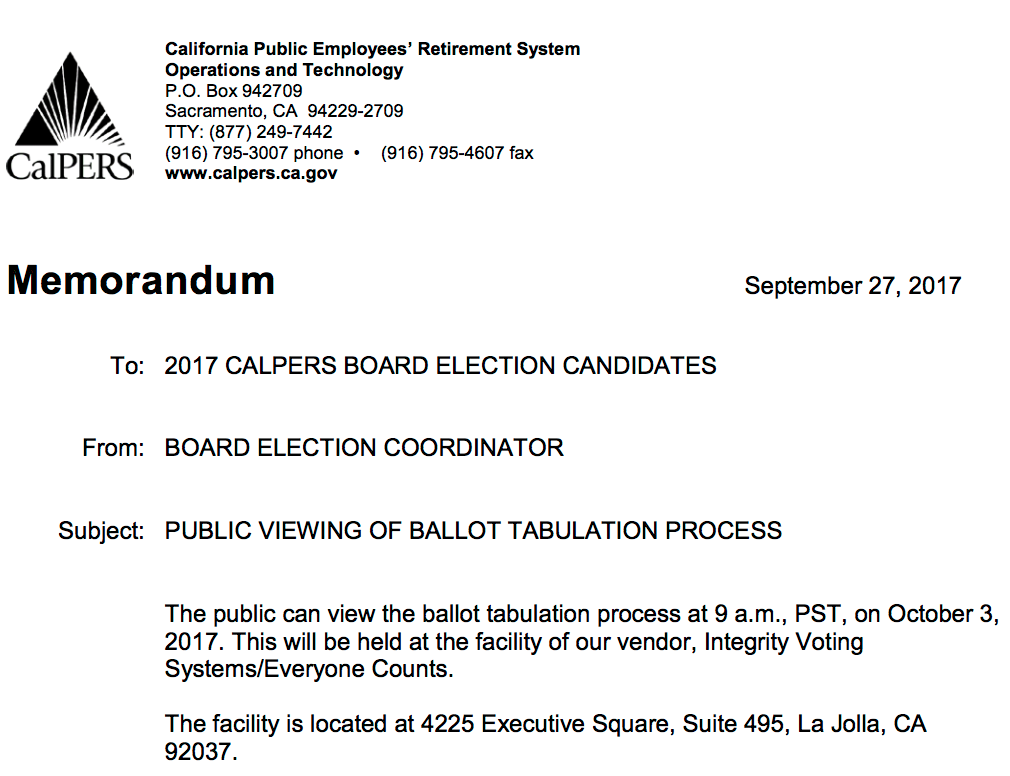 Revised third story: Two and a half hours later, the election coordinator sent a revised memo with a different suite number.

Brown sent this e-mail to CalPERS’ CEO later that day:

I just received this notice from the election coordinator’s office.

I’ve also never heard of a nine hour delay in the tabulation of votes. Any such delay calls into question the election results.

Please be advised that if your vendors do not tabulate the physical ballots in public, and/or do not start the tabulation process immediately after the close of voting, I will consider CalPERS to be out of conformance with its Notice of Election and regulations.

If the IVS employees told Brown the truth when she visited their facility, that Everyone Counts does not have any vote counting equipment, the only way “ballot tabulation” could comply with the CalPERS’ regulation would be for all the ballots to be transported to La Jolla, and for either IVS’ tabulation machines to be shipped as well or for Everyone Counts to gear up for a manual count.

To add insult to injury, the election coordinator’s message is dishonest by depicting Integrity Voting Systems and Everyone Counts as one business. They aren’t. They have not formed a joint venture and when pressed by Mike Flaherman in the September 20 meeting, they said instead that they had entered into an operating agreement for the CalPERS election. Consistent with that, the embedded “Notice to Award Contract” clearly shows that the contract was awarded to two companies, not one, and that Everyone Counts, and not IVS, is in Ja Jolla. A web search also returns no hits for addresses for IVS or its parent, K&H Printing, in Ja Jolla. CalPERS apparently thinks this obfuscation is necessary since it told the board that only IVS was its new election vendor, and also falsely said that IVS was certified by the Secretary of State. In fact, K&H Printing is certified only to do printing and finishing of certain types of election ballots. IVS does not have any certifications in California.

Fourth story in progress: CalPERS realizes it still has a problem. CEO Frost to candidate Brown at 12:09 PM yesterday:

We’re updating the Fact Sheet to answer your questions on vote tabulation. I’ll get that out to you and the board candidates by the end of today.

We’re going to need a little longer to get the elections sheet updated. I’ll have it to you by 9:00 a.m. tomorrow.

As those of you who have been paying close attention have probably figured out, the only way CalPERS can comply with its own regulation is to count the paper ballots (or at least start counting them) where CalPERS voters were instructed to mail them and where Brown saw them being processed, in Everett, Washington. Any other procedure introduces a time lag that was never contemplated in the regulation, and for good reason, as Brown insinuates. A delay between the close of voting and the processing of votes creates the opportunity for meddling.

So we’ll know in a little while whether CalPERS is prepared to adhere to its own regulation, or just tries to bulldoze its way through. One of the annoyances in dealing with CalPERS is that its general counsel Matt Jacobs doesn’t even bother covering up the fact that he is making stuff up. Even propagandists take far more pride in their tradecraft.