Spoiler: I don’t think so. CSR stands for Cost Sharing Reduction, and one of the ways Trump has sabotaged — or, depending on the outcomes of the Alexander-Murray bill, threatened to sabotage — ObamaCare is by threatening to cut them. From the White House Press Secretary:

Based on guidance from the Department of Justice, the Department of Health and Human Services has concluded that there is no appropriation for cost-sharing reduction payments to insurance companies under Obamacare. In light of this analysis, the Government cannot lawfully make the cost-sharing reduction payments. The United States House of Representatives sued the previous administration in Federal court for making these payments without such an appropriation, and the court agreed that the payments were not lawful.

The effect could be to throw the ObamaCare marketplace into chaos, and hurt poor people. Business Insider:

The payments were introduced by the ACA to help offset the cost to insurers of offering affordable plans to poor Americans. Insurers have repeatedly warned that if the payments were cut off, they would be forced to raise premiums to make up the financial loss.

“Raise premiums…” But how? And what happens then? Some states, including California, seem to have managed to dodge the CSR cut bullet by manipulating the prices of ObamaCare’s Silver plan. Timothy Jost, Health Affairs (October 13):

The effect of CSR payment termination, however, will depend heavily on how insurers deal with the change. In several states, including California, insurers have anticipated the termination and have already loaded the lost payments into their on-exchange silver plans. In other states, however, insurers have to date been instructed to assume that the payments will be made, or have been given no instructions whatsoever. In these states, the change is likely to cause considerable confusion. Insurers will have to refile their rates and will likely not be able to do so before open enrollment begins in three weeks. For more on the different responses insurers may have take, see here.

(Other potential states: “California, Connecticut, Florida, Idaho, North Carolina and Pennsylvania.”) Let’s unpack that phrase “loaded the lost payments” a little. The idea for this manipulation — there’s really no other word for it — seems to have been explained first in Kaiser Health News back on April 17, 2017:

Any systematic increase in premiums for silver marketplace plans (including the benchmark plan) would increase the size of premium tax credits. The increased tax credits would completely cover the increased premium for subsidized enrollees covered through the benchmark plan and cushion the effect for enrollees signed up for more expensive silver plans. Enrollees who apply their tax credits to other tiers of plans (i.e., bronze, gold, and platinum) would also receive increased premium tax credits even though they do not qualify for reduced cost-sharing and the underlying premiums in their plans might not increase at all.

We estimate that the increased cost to the federal government of higher premium tax credits would actually be 23% more than the savings from eliminating cost-sharing reduction payments. For fiscal year 2018, that would result in a net increase in federal costs of $2.3 billion. Extrapolating to the 10-year budget window (2018-2027) using CBO’s projection of CSR payments, the federal government would end up spending $31 billion more if the payments end.

This assumes that insurers would be willing to stay in the market if CSR payments are eliminated.

(Note that Sarah Kliff at Vox on May 15, ACA Signups on July 31, the CBO in August 2017, and Jonathan Cohn at HuffPo on October 15 all present variations of this basic idea which they seem to have independently arrived at. This should not be taken as a criticism of any of these sources, but as an indicator of the insane complexity of ObamaCare.) Sarah Kliff gives the clearest, because simplest, explanation of how this would look to the insurer and the customer:

Trump announces he won’t fund the CSR payments in 2018, so I [that is, the insurer] need to raise my premiums to cover that loss. [Here comes the manipulaton.] I jack up the price of my silver plan to $120, but don’t change the price of the bronze or gold plans, because the subsidies don’t apply there.

One of my [sic] enrollees earns $17,820 (150 percent of the poverty line). Under Obamacare, the government will give her a subsidy big enough that she needs to only spend 4 percent of her income — $60 each month — on a premium for a silver plan.

But this enrollee doesn’t have to stay in the silver plan. She could take her new, bigger subsidy and use it to help afford the $140 gold plan. Or she could buy the $60 bronze plan and pay nothing out of pocket at all.

Here’s how Cliff’s source at management consulting firm Oliver Wyman envisaged the result, after jacking up the price of the silve plan, and how it would look to “consumers” in Phoenix, AZ: 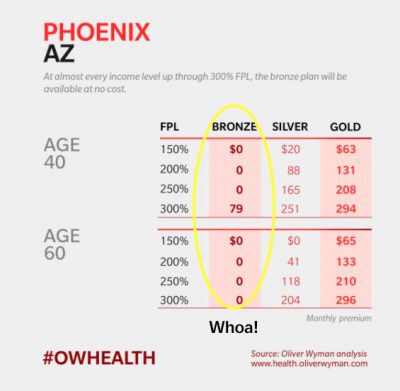 Sounds great, but I see a few problems.

First, the solution — following ACA Signup’s ingenious post, we’ll call it the “Silver Switcharoo” — is complicated and hard to communicate. If you don’t believe me, you try reading those links. I guarantee you won’t be reading them only once, and you’ll notice the tax on your time.

Second, the Silver Switcharoo assumes that all health care “consumers” are “smart shoppers.” That’s not true. From the NBER: “We find no evidence of consumers learning to price shop after two years in high-deductible coverage.” Granted, that’s health services, not health insurance, but talk to anyone who’s cobbled together some sort of coverage plan, and you will see they are very reluctant to risk changing.

Third, your true “smart shoppers” may simply pay the penalty regardless. Again the NBER: “[E]ven under the most optimistic assumptions, close to half of the formerly uninsured (especially those with higher incomes) experience both higher financial burden and lower estimated welfare” after purchasing Silver or Bronze Plans. Will this population react to the headline price, or the net after subsidy? I’m guessing the former.

Fourth, all of these approaches, though well-intentioned, assume (though not, to its credit, ACA signups) that the administration will remain passive, and not counterpunch to the price manipulation. One obvious thing they could try is controlling the navigator curricula and marketing materials to avoid mentioning the Silver Switcharoo at all. A second obvious way, for the states that rely on the Federal Exchange, would be to make the UI/UX for the Silver Switcharoo hard to use. No reason the site has to look as nice as Oliver Wyman’s screen dump! And the Trump administration being the Trump administration, I’m sure there are cruder methods that could be employed. I mean, is the Administration really going to spend $2.3 billion on a program it wants to dismantle because California thinks it’s a good idea?

Finally, the Silver Switcharoo is proof, if more proof were needed, that ObamaCare is random with respect to jurisdiction in its coverage. If you live in California, Connecticut, Florida, Idaho, North Carolina or Pennsylvania, you might be on the train to Happyville. Otherwise, you’re going to Pain City! So let us dispense, once and for all, with the delusion that ObamaCare is universal, or even fair.

In summary, the well-intentioned and intelligent health care wonks who have fought their way through the complexity of ObamaCare’s marketplace to invent the Silver Switcharoo remind me of the Ptolemaic astronomers, who sought to “save the phenomena” by adding more and more epicycles. Simple, rugged, proven single payer: Why can’t we like Copernicus and put health care and the patient at the center of our system, instead of the market?