Yves here. A case study in propaganda. The “spitting on our veterans” meme as a remarkable case of complete inversion of the facts.

However, I hate to be a nay-sayer, but I see having professional athletes protest by not saying the Pledge of Allegiance to be a huge misfire as a messaging strategy. The flag is a symbol of the nation, when the players have far more specific grievances. This allows the opposition to take control of the debate over what the protests are about, among other weakness of this approach. The actual issues are lost in the hysteria about the symbol, which is not a great way to win support and persuade people since the flag popular with large swathes of Americans.

By Sandwichman. Originally published at Econospeak

A couple of days ago, the New York Times published an opinion piece by Jerry Lembcke “The Myth of the Spitting Antiwar Protester.” Lembcke wrote a book a few decades ago debunking that myth but it is still going strong… stronger than ever, actually. The trope of “they’re spitting on our veterans” is popular with anti-kneeling fanatics who maintain that athletes who protest during the national anthem are “spitting on the graves” of those who died to defend the flag and the freedom to do as you’re told and stand during the national anthem.

I have always found Lembcke’s argument and evidence compelling but I don’t like to take anything for granted. So I did a little extra digging. Some of that was digging through a stash of old Amex/Canada magazines that I have held onto for 45 years or so. A Vietnam veteran named Al Reynolds wrote an account published in the May-June 1973 issue reporting on the Vietnam Veterans Against the War contingent in the “Home with Honor” parade staged in New York City at the end of March of that year. 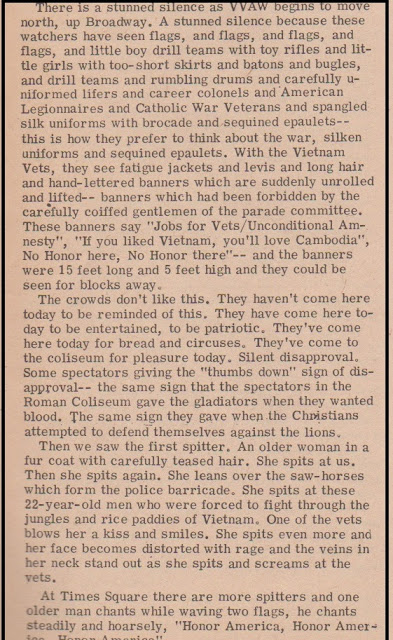 As far as I know that is the only contemporaneously published eyewitness account of veterans being spat upon. The veterans in question were anti-war protesters and the alleged culprit was a presumably “patriotic” spectator. Reynolds’ account, by the way, is substantially corroborated by the FBI’s file on the VVAW. Although it doesn’t mention spitting, it does refer to jeering and to three thwarted attempts by angry spectators to climb over barriers presumably to attack the protesters.I also searched several news databases to see if I could find any other contemporaneous accounts of either that event or others. Here is where things get intriguing. The New York Times carried a review of a play by Tom Cole, titled Medal of Honor Rag that referred to an American Legionnaire in Seattle who waited at the gate in the airport to spit on returning G.I.s because they were losing the war. I suspect that this alleged “legionnaire” is actually a fictionalization of the VVAW “Home with Honor” parade episode. All of the standard elements of the spitting myth are present in Cole’s play: the airport, the spitting, and the anti-war hippies screaming “baby killers” at the arriving servicemen. The one difference is that it is a pro-war “patriot” doing the spitting. 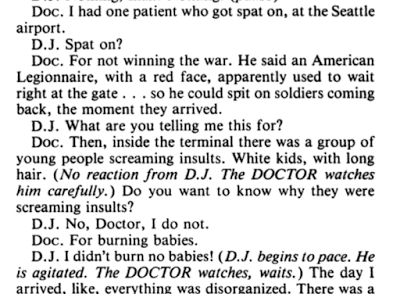 Medal of Honor Rag was first performed in Boston in April of 1975 and is supposed to be set in 1971. The first of the “Rambo” movies, First Blood was released in 1982. It contained the following transparently plagiarized bit of dialogue:

Rambo: Nothing is over! Nothing! It wasn’t my war. You asked me, I didn’t ask you. And I did what I had to do to win. But somebody wouldn’t let us win. Then I come back to the world and I see all those maggots at the airport. Protesting me! Spitting! Calling me baby killer and all kinds of vile crap! Who are they to protest me? Huh? Who are they? Unless they been me and been there and know what the hell they’re yelling about.

So there it is, folks. The making of a myth. An older woman in a fur coat, with carefully teased hair, her face distorted with rage, spitting at Vietnam veterans protesting against the war is transformed into a Legionnaire, with a red face, waiting at the airport gate to spit on returning G.I.s for not winning the war and finally into anti-war “maggots” protesting poor little John Rambo who was just doing what he had to do to win. So where does that leave us in October 2017? My, my, look at all the rhinestone Rambos! 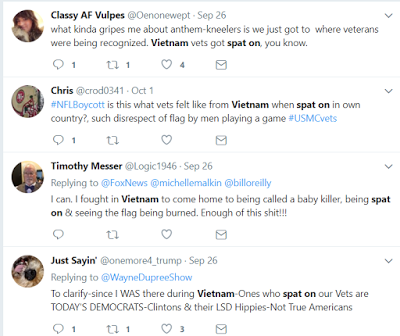