This is Naked Capitalism fundraising week. 1429 donors have already invested in our efforts to combat corruption and predatory conduct, particularly in the financial realm. Please join us and participate via our donation page, which shows how to give via check, credit card, debit card, or PayPal. Read about why we’re doing this fundraiser,what we’ve accomplished in the last year and our current goal, more original reporting.

The Trump Administration just did the IMF a favor by calling attention to a new report that supported the idea of taxing the wealthy more heavily. And in picking this fight, the Administration also tacitly admitted that its very sketchy tax “reform” plan is going to favor the rich, despite repeated denials.

Even though the IMF report some attention in the financial and business press, it’s not the sort of thing that has much impact in the halls of Congress. Admittedly, the report also took a fiscally orthodox line, urging that US tax “reform” not lead to bigger deficits. But the fiercely hawkish CBO is likely to give the Administration plenty of grief if its tax cuts aren’t matched by spending cuts or tax increases elsewhere, and the CBO has vastly more sway in Washington than the IMF on budget sausage-making. So getting upset about the IMF report elevated it when it would have been wiser for the Administration to have shrugged it off.

And the Administration was upset. Look at the whinging:

Mick Mulvaney, head of the Office of Management and Budget, told the Financial Times that sceptics of the plan were “heavily invested in it not working out”.

The Financial Times’ comment section had fun with that line. For instance:

It’s terrible how people can become “invested” in evidence-based policy and rationalism.

Maybe you should provide some evidence supporting the premise that such tax cuts generate growth and revenue – as opposed to the mountains of evidence that suggest otherwise.

While the Trump Administration’s hostility made for some good headlines, the new IMF paper is significant even though its endorsement of using government policy to reduce inequality is measured. We’ve embedded the section on inequality at the end of the post.

Bear in mind that this document is part of the, The Fiscal Monitor, which the IMF publishes periodically. It has more political importance than its typical research pieces and hews more carefully to official positions. By contrast, the research side of the IMF has been putting out articles for years that often buck economic orthodoxy.

If you’ve been paying attention to economic research, it has become more and more widely accepted that high levels of inequality lead to lower levels of growth. Some economists argue that the impact on demand is a big culprit (rich people don’t spend as much as lower income people); others contend that it lowers productivity (cheap workers reduce the incentive to invest in labor-saving equipment and methods). And there are plenty of other theories.

But even if you agree on a diagnosis, what should be the treatment? The IMF argues that using “fiscal” measures won’t hurt growth and will probably help. The agency also says in passing that higher inequality increases political divisiveness, so one could also argue that even if you weren’t sure about the economic benefits, there are other reasons to pursue more redistributive policies.

Having said that, perhaps due to the undue preoccupation in the US with taxes, a lot of the media accounts say the IMF recommended raising taxes on the rich. That’s not quite right. The IMF paper looks at the taxing and spending side together, which is the only way to look properly at the effect of government action on inequality. It also then looks at tax issues (it’s notably tentative about taxes on capital), a UBI, and more progressive spending, particularly on health care and education.

Even then, I have no doubt one could argue about methodology. For instance, the paper focuses on income inequality, as opposed to wealth inequality. It points out the two are correlated, which is true, but they are more accurately seen as entwined. But parsing out how policies also favor financial and real economy asset-holders is an even bigger task.

The reason that looking at more than taxes matters is that in the US, our tax system at the Federal level is somewhat progressive, but budget experts tell me the spending is net regressive, so spending undercuts somewhat the impact of taxation.

The IMF’s own data show how much an outlier the US is. Look at how little we do in terms of reducing inequality compared to other countries. As an aside, I have doubts about the Greece data point because Greek shipping magnates manage to escape reporting income in Greece by having their ships “flagged” in the names of other countries so as to evade taxes and liability. A lovely business model. 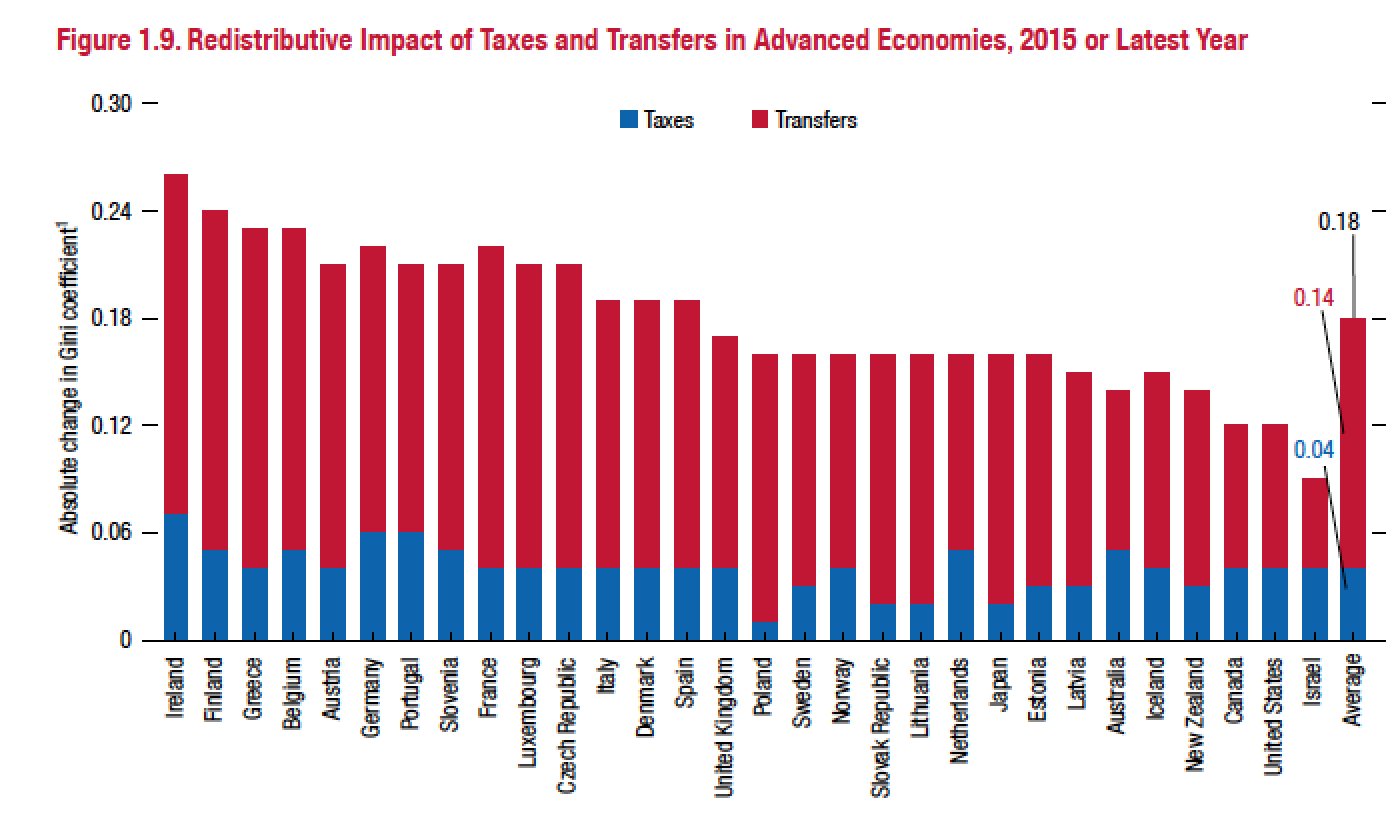 Notice how this chart also makes clear how important transfers are. And the IMF points out that the impact of tax-based redistribution is probably overstated:

In reality, tax systems may be even less progressive than suggested by these measures, because wealthy individuals often have more access to tax relief and more opportunities to avoid taxes. For instance, since households with high incomes are more likely to be homeowners, they benefit more from deductions for mortgage interest, where applicable. Any allowable deduction is also worth more at higher marginal tax rates. In addition, the wealthier have more resources to dedicate to tax planning, as well as greater incentives to engage in such activities.

Having said that, the IMF does make tax policy a major focus of its analysis:

It is too bad that the analysis is silent on institutional factors, namely the legal regime and the formal and informal rights conferred to capital and labor. The IMF’s focus completely omits ideas like the fact that the US had a policy which President Kennedy threatened to have made law if major companies failed to adhere to it, that the benefits of productivity gains would be shared between the businesses and workers. The abandonment of government backing for that approach is a, if not the, proximate cause of real wage stagnation in the US since the 1970s and the start of the explosive growth in inequality. But the IMF is a diehard believer in labor market “reforms,” meaning undermining what little in the way of worker protections that still remain. The IMF will never acknowledge that weakened labor rights are a major cause of rising inequality.

Nevertheless, tax policies have clearly changed to favor the rich: 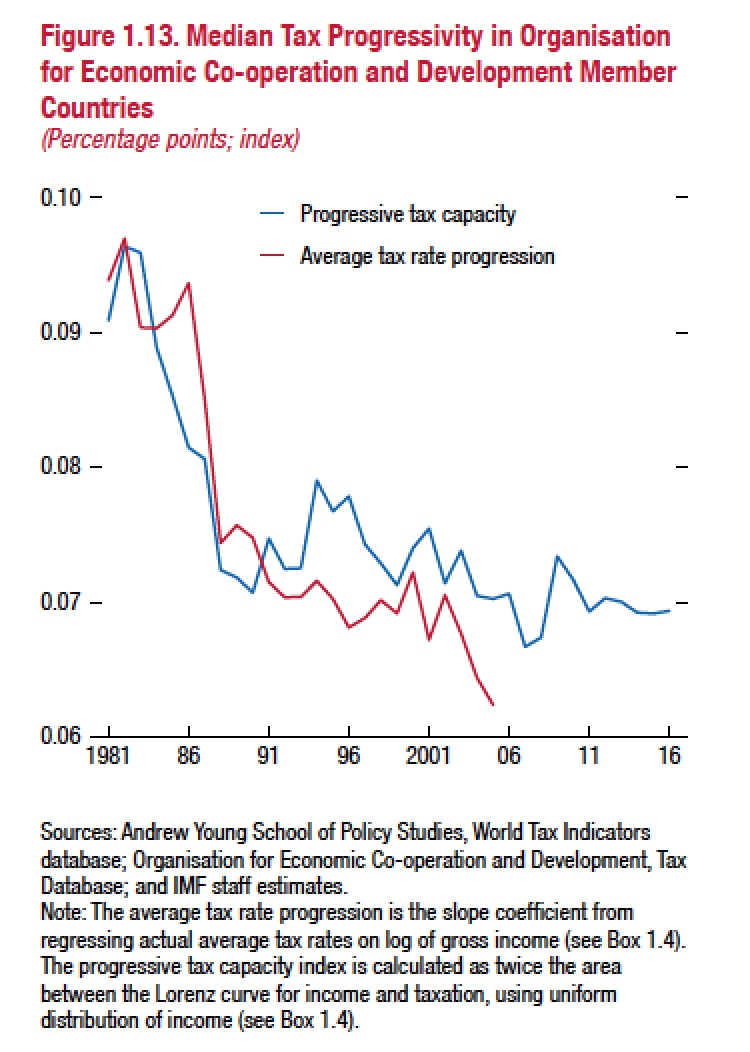 Having said all of this, this is still a very cautious document. But it does show that even strongly neoliberal organizations are telling Davos men that they need to heed the case for having the lower orders get a bigger piece of the pie.