Yves here. Note that this post considers the cost of hard v. soft Brexit, as in having the UK lose access to the single market versus remain within it. It does not consider the cost of what we have been calling a “disorderly Brexit” or what others have labeled “crashing out of the EU,” meaning a Brexit with no deal at all.

Note that this paper only gives some consideration to non-tarrif barriers, like divergence of technical standards. It does not appear to factor in things like massive lines at customs and documentation requirements in a hard Brexit scenaio. So if anything, the estimates are likely to be conservative.

Global value networks make it difficult to evaluate the trade impact of Brexit. Using a new model of trade that accounts for the indirect effect of these networks, this column delivers fresh bad news for the UK, and for the rest of Europe. Brexit cuts GDP more, and costs more jobs, if we also consider global value chains. A hard Brexit would destroy four times as much GDP, and four times as many jobs throughout Europe, as a soft Brexit.

Production processes are becoming increasingly global. Acemoglu (2012) and Johnson (2014) have argued that, as a result, we can no longer consider bilateral trade in isolation when we evaluate trade policy.

In a recent paper (Vandenbussche et al. 2017), we develop a new approach to evaluate trade policy when global value networks exist. It extends a traditional gravity model to include sector-level input-output linkages in production. This allows a more complete assessment of trade policy shocks.

While the framework is entirely general, we used it to evaluate the impact of Brexit on the UK and the EU27. Our world input-output model can be used to predict the trade impact of the UK’s withdrawal from the EU on the domestic value added, and employment for every individual EU country involved. The trade impact is arguably the most important effect and leaves aside less influential, channels such as foreign direct investment (FDI) effects, budgetary issues, or potential trade diversion effects.

Losses from the trade impact of Brexit vary by EU country, depending on its openness to trade, its trade intensity with the UK and vice versa, its sectoral composition, and the positioning of its sectors within the global supply chain. The conventional wisdom of Brexit is that the UK has a great deal to lose, but a sector-level input-output approach indicates that there are only losers from Brexit. Both the UK and each bilateral trading partner in the EU would suffer substantial losses if they were denied free-trade access to each other’s market.

Our analysis clearly shows that the EU27 stands to lose considerably more than previously thought. This is because EU27 production networks are closely integrated, which implies that tariff changes with the UK do not affect only direct trade bilateral flows, but also indirect trade flows via other EU countries. For example, the Belgian steel sector would suffer both through a direct reduction in exports to the UK, and also through a reduction in demand for steel that would have been used in German-built cars for the UK.

To create these impact estimates, we take the predictions from our world input-output model to the World-Input-Output-Database (WIOD). This database makes it possible to identify production networks and current supply chains in the EU For every country-sector in the EU28, WIOD provides total production, the inputs needed from other country-sectors, and how output is subsequently used by other country-sectors in their production process. Using this, we can distinguish ‘direct’ exports to the UK from ‘indirect’ exports that were shipped to third countries, then to the UK. Including indirect exports provides a more complete assessment of Brexit by identifying the European production network and value chains in detail.

We consider two hypothetical Brexit scenarios (summarised in Table 1). Dhingra et al. (2017) quantified the future costs of trade between the EU27 and the UK in a soft and hard Brexit scenario:

Figure 1 shows projected job losses for each Brexit scenario when both the UK and the EU27 raise their barriers. The bars indicate the normalised job losses as a percentage of a country’s active population. Figure 1 also reports, in brackets, the worst-case number of job losses in each EU country if there was a hard Brexit.

Our results clearly indicate that the UK would be hit relatively harder than the rest of the EU27 (except for Ireland) in both scenarios.

In either scenario, Brexit would lead to a relative reduction in economic activity in the UK and EU27.

Again, these impacts differ substantially across EU-27 member states. The EU-27 countries that lose relatively most are those with close historical and geographical ties to the UK (Ireland or Malta, for example) and small open economies (Belgium, the Netherlands, and the Czech Republic). While Germany would suffer the largest absolute number of job losses (291,930), as a percentage of the total active population its relative losses are more moderate when compared to the other EU27 countries. For each EU country, Table 2 shows which sector will be most affected under a hard Brexit scenario. For Germany, most jobs will be lost in motor vehicle manufacturing. For Belgium job losses are highest in the food sector. For countries such as France, most jobs are lost in administrative and support activities.

Again our results differ from other studies because our methodology additionally accounts for input-output linkages between goods and services sectors, and includes both direct and indirect trade with the UK. 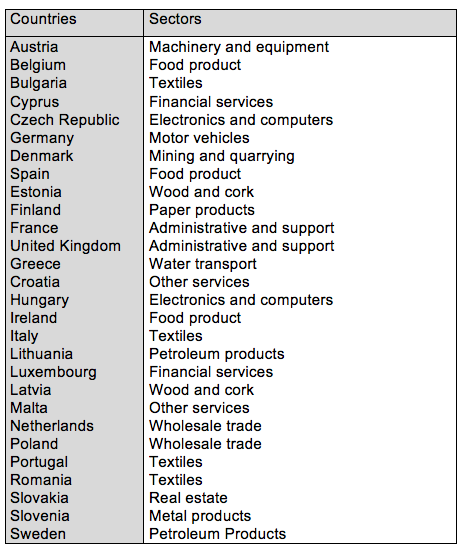 Our findings indicate that both the UK and the EU27 would suffer substantial losses if they are denied free trade access to each other’s market when Brexit happens. While the current belief is that especially the UK has a great deal to lose from Brexit, our sector-level input-output approach clearly shows that the EU27 stands to lose considerably more than previous estimates. The reason is that EU27 production networks are closely integrated, which implies that tariff changes with the UK do not just affect each EU27 country’s direct bilateral trade flow to the UK but also the indirect trade flows (via third countries) that end up in the UK.