Yves here. To add to the points made in this post: The naive economic view that “more open trade is every and always better” is unsound. It’s based on the faulty premise that moving closer to an unattainable ideal state of frictionless, unrestricted trade is preferable.

But that notion was debunked over 60 years ago, in the Lipsey-Lancaser theorem, in their paper, “The Theory of the Second Best”. It found that moving closer to that unachievable position could make matters worse, not better, and (gasp!) economist and policymakers needed to assess tradeoffs, and not rely on simple-minded beliefs. And the example Lipsey and Lancaster used was in trade, a specific example where the country liberalizing trade would wind up worse off.

By Aabid Firdausi, a Master’s student at the Department of Economics, University of Kerala. He is interested in understanding the socio-spatial dynamics of capitalism from an interdisciplinary perspective. Originally published at The Minskys

The euphoria around international trade and the general consensus regarding capitalism’s inevitable sustenance among countries of the Global South is at least partly due to the absence of an alternative after the collapse of the Soviet Union. The politics of capitalism, with its expansionary dynamics, has assumed a truly “global” avatar by aggressively pursuing a neoliberal globalization agenda. Thus, we see much hype around the numerous trade treaties that governments around the world sign, claiming they would boost economic growth and create jobs. However, a critical examination of mainstream trade theories reveals several insights as to why there has been a hegemony of thought when it comes to attitudes around globalization.

The idea that “free” trade and globalization imply mutual benefits and prosperity for all the parties involved is simply accepted as common sense. Mainstream trade theories argue that if nations engage in international exchange, then all parties will be better off. Although this seemingly innocuous assumption is based on an unrealistic worldview, it has deep implications when translated into practice. This article provides a basic understanding of some of the areas that theories in mainstream international economics conveniently ignore. 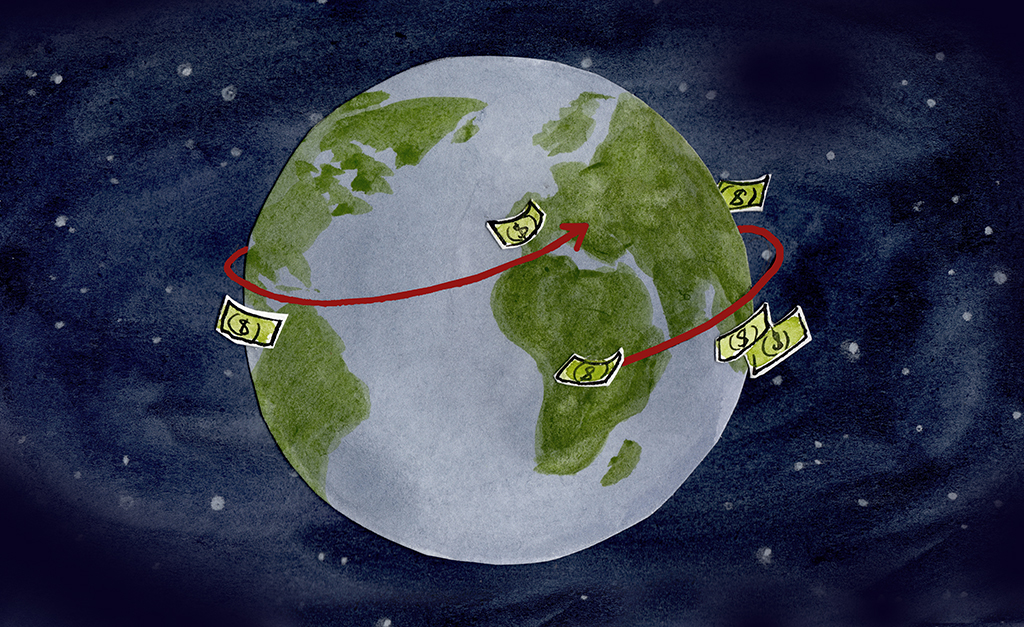 It is pertinent that we pause and critically question what we are told, taught, and made to believe – for nothing that is promoted with such great fanfare by economic elites can be free of costs. When it comes to trade treaties,  the devil often lies in the details, which often reveal policies that lead to the further immiseration of the working class and the peasantry, especially in the Global South. First, it is extremely important to understand trade in a historical perspective and how it has changed with different epochs within capitalism. The North-South trade in many instances was first a colonial tragedy (the British colonization of India, for example) and has now become a neo-colonial farce. This manifests itself in the myriad ways in how multinationals shape spheres of public and private actions from land-grabbing to a homogenization of consumption patterns.

Secondly, international trade theories blatantly disregard the asymmetric power relations that exist in the global political economy. Despite the dichotomous classification of nations on the basis of the degree of development, trade theories often assume that transactions between two unequal nations tend to benefit both. While it is naïve to discard any benefits at all from the process, it is essential that we ask who frames these trade policies and what sections of society receives the lion’s share of the benefits.

Third, mainstream theories often categorize labor and capital as homogenous and lump them together as factors of production. In reality, as it is obvious, labor and capital are far from homogenous. A critical reader looking at these flawed assumptions that most theories rest upon could easily conclude they would better suit interregional trade on an extremely local basis, than an international basis! The variations in factors on a local level would be significantly smaller than the variations and imbalances that exist on a broader scale.

Fourth, I would argue that trade theories commit a grave injustice in its treatment of labor, which shows the class nature of most theories and the subsequent policies that are influenced by it. Cheap labor is often hailed as a virtue of the Global South – and this is projected as an open invitation to set up sweatshops for global capital in the name of manufacturing competitiveness. Thus, the hegemonic narrative around the potential for trade is essentially dehumanizing in nature. Such trends that have been persistent since the vigorous promotion of mathematical economics have largely dissociated the discipline from the wider branch of social science.

Fifth, there exists a systematic misdiagnosis of the power relation between capital and labor. This is perhaps most evident in the asymmetries observed in the globalization of capital and the globalization of labor.  While the former has largely been internationally mobile, the latter has not been so. Though this can be partially explained by the existence of the state and its territorial boundaries, it would be foolish to discard the class dynamics of this asymmetric transnational mobility.

Finally, the after-effects of (primitive) accumulation have largely been ignored in mainstream theories. The presence of regional endowments that creates a fertile land for foreign capital and the subsequent invitation of the so-called job-creating corporations ignore the displacement of the livelihoods of the peasantry. This dispossession that Marx referred to as the primitive accumulation has been rampant in the Global South. However, the compensation and rehabilitation provided to the dispossessed have largely been inadequate. This raises larger questions about what development actually is and whose interests it serves.

Thus, it is important that we see through the haze and understand the basis and implications of mainstream theories on trade, and who they truly favor. What is taught in classrooms shapes to a large extent convictions and the worldview of a large number of students. There is a pressing need to promote and develop alternative streams of thought that are “social” in nature amidst the contemporary backlash against capitalist globalization. It is necessary that an interdisciplinary perspective on globalization in general and international trade, in particular, is cultivated in academic institutions in the Global North and South. Only then can we undo the hegemony of the “globalization benefits all” narrative.