Why dolphins are deep thinkers Guardians. Not news if you follow research. A Columbia philosophy professor was asked to consider the question of what it would take for another species to be a “non human person”. He was encouraged to study dolphins as his test case. He concluded that dolphins met the criteria he established (sadly Google is so crapified it is hard to find his book, whose title unhelpfully isn’t the most transparent). Other scientists support this view. India not long ago similarly declared cetecans to be non-human persons.

A letter about Google AMP AMP Letter. Important. Google being evil, as usual.

How New York City is tackling a mental health crisis spurred by Hurricane Sandy Grist. From late last year, but germane because we are only going to see more of this sort of thing.

Brussels warns UK companies of shut-out in event of no-deal Brexit Financial Times. The ire from the Government is priceless. Many acid comments at the FT. One I particularly liked:

Lafcadio
It’s amazing how these EU negotiators never seem to understand that they’re supposed to be negotiating on the UK’s behalf.

Philip Hammond and David Davis warn of a global crash if financial services are excluded from final Brexit trade deal The Sun. Services deals take longer than trade deals. Only way UK banks will get access to EU is by submitting to EU regs. Plus this threat is way exaggerated. It is London that is threatened, not the banks. They are perfectly capable of moving people and operations and getting licenses.

Speech by Michel Barnier at the Trends Manager of the Year 2017 event European Commission. On Phase 2 expectations.

Facebook may be ready to invade your physical world with an outrageously priced video device Quartz (margarita). This is enough to make me consider using a voice masking device and donning a fake nose and mustache every time I leave the house.

When Intelligence Agencies Make Backroom Deals With the Media, Democracy Loses TruthOut (TF). Important, particularly if you aren’t familiar with or have forgotten the details about the Church Commission.

Trump says he’ll take heat for immigration deal The Hill. IMHO, our Elizabeth Burton had the right take in comments a few days ago. The idea that Trump has Alzheimers is oversold. He’s an at best someone of average smarts who never applied himself intellectually and is an off-the-charts narcissist. He is presumably not bad at doing developments but has a world class case of Dunning Kruger effect pretty much everywhere else, due among other things to having surrounded himself with toadies. Most narcissists make an attempt to cover for it because their fragile egos demand constant reinforcement, and showing how thin-skinned they are produces negative feedback, the thing they are most eager to avoid. Shorter: Trump has always had terrible impulse control. Having it be fully on view, and aggravated by pressure and not being able to control his environment as much as he could in the past, is not proof of cognitive decline.

Judge blocks Trump admin from ending DACA program The Hill. This story broke later in the day than the one above. Trump’s lawyers may have seen this coming, hence the willingness to deal with Dems.

Trump’s Policies Offer Plutocracy on Steroids, Not Economic Populism The Nation (resilc). In the off chance you hadn’t noticed….

Report: 60+ Immigrants Killed After Being Deported, Despite Warnings to U.S. Officials Daily Beast

Oprah Boomlet. Could also be classified under “Kill Me Now”

Message to Oprah and the Democrats: One terrific speech doesn’t make anyone presidential material Independent. Resilc: “Wake me up 3 years after Trump beats Joe Biden.”

And the Golden Globe award goes to … Witch hunting! WSWS (Judy B)

Resisting Internet Censorship: Online discussion with Chris Hedges and David North WSWS. A webinar for next Tuesday, January 16, at 7:00 pm EST. It will be live streamed on YouTube and Faceborg. They were kind enough to ask me to provide a statement, but I am not sure what would be useful and different from what others would say. By virtue of how the site has evolved, NC is much less vulnerable to being stomped on by Google and FB than most “alternative” news and commentary sites, but the cost of being less vulnerable is less reach, which translates into lower traffic and most important, probably lower acquisition of new readers.

Catherine Deneuve and Others Denounce the #MeToo Movement New York Times. I’ve seen only a few reaction, but the denunciations seem big on straw manning and/or seem to view sex as so inherently a matter of male domination so as to pretty much prove the point about Puritanism, that sex is so fraught for women that they have to approach it with extreme caution.

Joerg Sprave Hacks a Robot Vacuum So That It Can Carry and Fire a Glock Core77. Under “only in America” because even though Sprave is German, his subscribers are overwhelmingly American. Plus who would want to modify a Roomba so it could no longer be a cat toy? 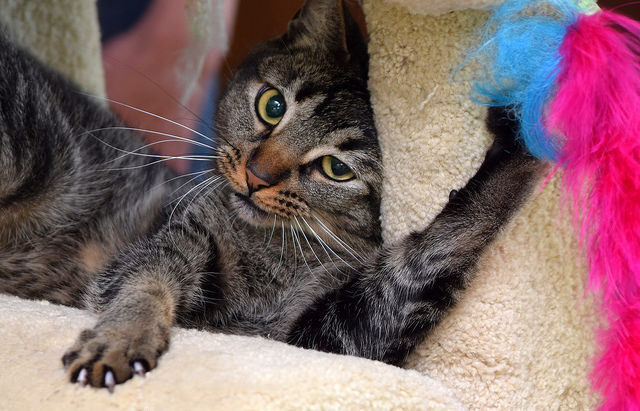