While snorkelling a couple of years ago near the Indonesian island of Flores, I was ensorcelled by a magnificent coral reef. Just under the water loomed another magical world teeming with vividly-coloured sea creatures.

Although being underwater had always terrified me, that world was so captivating that over the next year, I learned to scuba dive, so that I could explore it further.

Recently, global warming has severely stressed many of the world’s coral reefs– via a phenomenon known as coral bleaching. When sea temperatures rise, corals expel the symbiotic algae– zooxanthellae–  that live in their tissues, and the coral itself turns a ghostly white.  During the last two years, the Great Barrier Reef has been worst affected, according to the Guardian, with more than two-thirds of it now damaged.  Recent forecasts suggest that the southern part of the reef is also now at risk, according to another Guardian report, making the prospects of recovery of this natural wonder of the world unlikely.

At a larger level, the health of the world’s coral reefs is another indicator of the state of planet, and that is bleak.

But bleaching is only one threat that coral reefs face. A study reported this week in Science, Plastic waste associated with disease on coral reefs, chronicles  another rising threat to reefs: plastics.  Dr. Joleah Lamb and ten other researches– herein after Lamb et al.– surveyed 159 coral reefs in the Asia-Pacific region and found that billions of plastic items were entangled in the reefs. Damage was worst in those reefs with spikey coral species, as their spikes  were more likely to snag plastic. Once a reef was draped in plastic, disease likelihood increased 20-fold. The scientists noted that plastic debris stresses coral by depriving it of light, allowing the release of toxins, and thus providing pathogens with a foothold for invasion.

Reefs are not only worth preserving for their beauty alone. The Lamb study notes that they provide US $375 million in goods and services annually through fisheries, tourism, and coastal protection. These benefits and the reefs themselves are threatened by the estimated 4.8 million to 12.7 million metric tons of plastic waste enter the ocean in a single year. The resulting influence on disease susceptibility in the marine environment was before this study unknown.

surveyed 159 coral reefs spanning eight latitudinal regions from four countries in the Asia-Pacific for plastic waste and evaluated the influence of plastic on diseases that affect keystone reef-building corals ((benthic area = 12,840 m2) (Fig. 1). The Asia-Pacific region contains 55.5% of global coral reefs and encompasses 73.0% of the global human population residing within 50 km of a coast. Overall, we documented benthic plastic waste (defined as an item with a diameter >50 mm) on one-third of the coral reefs surveyed, amounting to 2.0 to 10.9 plastic items per 100 m2 of reef area [95% confidence interval (CI), n = 8 survey regions]. The number of plastic items observed on each reef varied markedly among countries, from maxima in Indonesia [25.6 items per 100 ± 12.2 m2 (here and elsewhere, the number after the ± symbol denotes SEM)] to minima in Australia (0.4 items per 100 ± 0.3 m2) [citations and some figures omitted].

Although terrestrially derived pollutants have previously been implicated in several disease outbreaks in the world’s oceans, the researches noted that no studies have yet examined the influence of plastic waste on disease risk in a marine organism. In this study, they visually examined 124,884 reef-building corals for signs of tissue loss characteristic of active disease lesions and found “found plastic debris on 17 genera from eight families of reef-forming corals.” 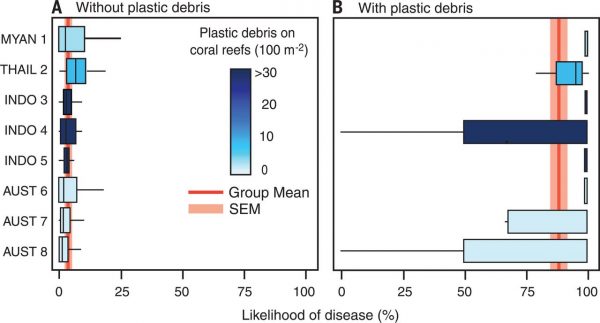 I will spare readers here the intervening steps in which Lamb et build their argument— although the work is accessible, and the key points summarized in five paragraphs in the article linked to above.  Some of these look rather dense, and I didn’t want to bury readers in detail and risk that some wouldn’t persevere to the conclusions.

While I encourage interested readers to read the full account, for those others who prefer to jump straight to the point in what is, after all, a weekend read, here’s the conclusion:

Our study shows that plastic debris increases the susceptibility of reef-building corals to disease. Plastics are a previously unreported correlate of disease in the marine environment. Although the mechanisms remain to be investigated, the influence of plastic debris on disease development may differ among the three main global diseases that we observed. For example, plastic debris can cause physical injury and abrasion to coral tissues by facilitating invasion of pathogens or by exhausting resources for immune system function during wound-healing processes . Experimental studies show that artificially inflicted wounds to corals are followed by the establishment of the ciliated protozoan Halofolliculina corallasia, the causative agent of skeletal eroding band disease. Plastic debris could also directly introduce resident and foreign pathogens or may indirectly alter beneficial microbial symbionts. Cross-ocean bacterial colonization of polyvinylchloride (PVC) is dominated by Rhodobacterales, a group of potentially opportunistic pathogens associated with outbreaks of several coral diseases (. Additionally, recent studies have shown that experimental shading and low-light microenvironments can lead to anoxic conditions favoring the formation of polymicrobial mats characteristic of black band disease

By disproportionately reducing the composition or abundance of structurally complex reef-building coral species through disease, widespread distribution of plastic waste may have negative consequences for biodiversity and people. For example, on coral reefs, the loss of structural habitat availability for reef organisms has been shown to reduce fishery productivity by a factor of 3. [citations omitted.]

What Must Be Done

By 2025, if present trends continue, the researchers note that the plastic waste entering the oceans  from land is predicted to increase by one order of magnitude from present levels. This accelerating scourge will only further stress already-fragile coral reefs.

So, what must be done?

Climate-related disease outbreaks have already affected coral reefs globally and are projected to increase in frequency and severity as ocean temperatures rise. With more than 275 million people relying on coral reefs for food, coastal protection, tourism income, and cultural importance , moderating disease outbreak risks in the ocean will be vital for improving both human and ecosystem health. Our study indicates that decreasing the levels of plastic debris entering the ocean by improving waste management infrastructure is critical for reducing the amount of debris on coral reefs and the associated risk of disease and structural damage [citations omitted].

This BBC account, A third of coral reefs ‘entangled with plastic’, quotes the principal author of the study on necessary action:

“Plastic is one of the biggest threats in the ocean at the moment, I would say, apart from climate change,” said Dr Joleah Lamb of Cornell University in Ithaca, US.

“It’s sad how many pieces of plastic there are in the coral reefs …if we can start targeting those big polluters of plastic, hopefully we can start reducing the amount that is going on to these reefs.”

Last week, I posted on the EU’s much ballyhooed, long-awaited sadly-lacking European Strategy for Plastics in a Circular Economy, which, unfortunately, relies unduly on recycling rather than upfront elimination to reduce plastics waste and even within this narrow framework, endorsed all too feeble goals (see EU Makes Limited Move on Plastics: Too Little, Too Late?). The Lamb et al. study marshals concrete evidence as to the damage being wrought by plastics ion coral reefs– a further clarion for steps to be taken to confront this urgent global crisis.