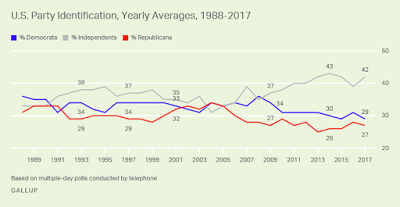 A two-party race to the bottom (source)

As one commenter noted after reading this news, “Well, that just says it all.” My inner reply: Services rendered; services paid.

From The Hill (my emphasis throughout):

Former Energy Secretary Ernest Moniz has been tapped to serve on the board of electric utility giant Southern Co.

Moniz, who served under former President Obama from 2013 to 2017, will be an independent director on the board.

“I have long admired Southern Company for its innovative approach to research and development within the clean energy space, and look forward to joining the board,” Moniz said in a late Monday statement.

“Tom is an industry leader and I’m eager to work with him and the entire board in helping Southern advance at a time of great change in the energy world,” he said of Tom Fanning, Southern’s CEO.

Its “innovative approach to research and development within the clean energy space” means … what? “I love how cleverly they keep their profits flowing”?

Or “I love how nicely they reward me for service to their industry”?

Perhaps the latter. The Hill again:

The company is working to build two new reactors at Vogtle Electric Generating Plant in Georgia, the only nuclear power plant currently under construction in the country. But they are years away from completion and billions of dollars over budget.

Feathering his nest by irradiating yours. That’s Mr. Moniz below. If you see him on the street, feel free to say, “Thank you for your service.” 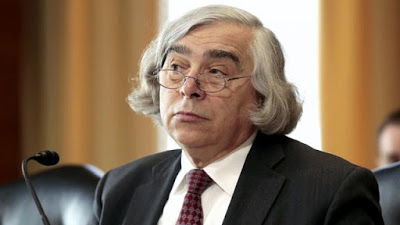 Obama’s Energy Secretary Is Not Alone

President Obama on Friday praised Heather Zichal, who is resigning from her post as his energy and climate czar….

“For more than five years, I have been fortunate to have Heather Zichal as a trusted advisor,” Obama said in a statement on Friday.

“She crafted my energy and climate change agenda in the 2008 campaign, then again on my Presidential transition, and as my top energy and climate adviser at the White House, she has been a strong and steady voice for policies that reduce America’s dependence on foreign oil, protect public health and our environment, and combat the threat of global climate change,” Obama said.

How does she “combat the threat of global climate change”? By cashing in her chips at the Bank of Big Energy, like Obama’s Energy Secretary just did.

…At least five of these Obama officials now work for natural gas export companies, four of them for Cheniere and another for Tellurian.

Though pitched as the “cleaner fossil fuel” by many of these former Obama officials, the high levels of methane in natural gas carry a climate punch….

One of those Obama alums, former top White House climate and energy staffer Heather Zichal, now sits on the Board of Directors for Cheniere. She also recently was named managing director of corporate engagement for the environmental group The Nature Conservancy….

Keep those names in mind — The Nature Conservancy and methane giant Cheniere.

About The Nature Conservancy, Naomi Klein had this to say:

In her book This Changes Everything: Capitalism vs. The Climate, Naomi Klein reveals that The Nature Conservancy actually owns an oil well in Texas and uses the financial earnings which come from it as part of its funding stream. Further, both BP and Chevron sit on The Nature Conservancy’s Business Council.

And about Zichal, Obama and Cheniere:

As DeSmog previously reported, White House meeting logs show that Zichal met twice with Cheniere officials in 2013 while she was working under Obama. Not only was Cheniere the first company to receive an LNG export permit from the Obama administration in 2012, it was the first to receive such a permit in over 50 years.

“Working” on the Cheniere Board of Directors seems to pay well: “According to forms filed with the U.S. Securities and Exchange Commission (SEC), Zichal earned $90,000 for her service on the board in fiscal year 2016 and another $90,014 worth of stock options, for a total of about $180,000 in compensation.”

Zichel is just one of several top Obama officials profiled in the report. Others include a Director of Public Affairs in the Obama Energy Department, a Coordinator for International Energy Affairs, a Chief of Staff in the Obama’s Office of Fossil Energy, and several others.

Would Mainstream Democrats Risk the 2018 Election for Money?

It’s really hard not to see these actions as venal. Mainstream Democrats — feathering their nest by boiling yours.

It’s also hard not to see these actions as risky. Do mainstream Democrats think they won’t take a hit in 2018 when they do stuff like this? Do they even care? Or do they imagine the blue wave (if it comes) will sweep them to power no matter what they do? (One could argue that Hillary Clinton risked her own election for money: Did she not know, when she gave all those Wall Street speeches, that she’d start running for president two years later — and that they’d make a difference?)

I’m amazed at what we’re witnessing. As low as the Republicans have sink — and they’ve reached a decades-long Party bottom in their attempts to “win absolutely” for big money donors — mainstream Democrats are giving them a run for their money, a downhill run, looking for their own Party bottom.

This story has “national tragedy” written all over it.