Yves here. The folks at Tax Justice Network are, in our humble opinion, far too generous to the so-called B Team. The one bit of good news is while they may have some cachet in NGO circles, they don’t have much if any reach in the US/UK press.

The B Team, the leading global group for responsible business, has released a report: ‘A New Bar for Responsible Tax‘. To our great sadness, it moves the bar in one direction – towards the bottom.

When the B Team first got in touch to discuss their plan to work with major multinationals to establish a new standard of tax transparency, we were excited. The one thing lacking so far in the process towards public country-by-country reporting has been a champion among the major multinationals – and that’s exactly who the B Team work with. Moreover, they have made some genuine progress towards beneficial ownership transparency for their own group structures. We felt their staff were on the right track, and we hoped that they would be able to take the business members with them.

It soon became clear that the members were less keen. But even so, the report which has now been released is desperately disappointing.

The Tax Justice Network has always reflected the importance of business actors. While we resist giving undue credit purely for economic size, and we are well aware of the lobbying power to resist financial transparency and progressive tax, we also understand that the private sector is far from monolithic.

Small businesses suffer more than most from the unlevel playing field created by multinationals’ tax avoidance and the self-serving lobbying of their professional services firms. And all businesses are controlled by people, with social consciences and community spirit – so that many staff and directors, whatever the size of the business, support the principles of tax justice. Investors, meanwhile, respond both to ethical motivations and to the growing evidence that multinationals’ tax avoidance does not yield higher return – but does leave investors to bear higher risks.

With that in mind, for example, we helped to support the development of the Fair Tax Mark which allows more responsible businesses to have this independently affirmed to customers and the wider public. The Fair Tax Mark is now used in the UK by a range of businesses, from local firms all the way to FTSE 100-listed household brands such as the energy giant SSE plc. We have also worked with the Responsible 100 group to create a tax transparency standard which has been taken on by the likes of financial services multinational Legal & General.

TJN also enjoys productive cooperation with responsible investors. For example, the signatories to the UN Principles for Responsible Investment now have nearly $100 trillion of assets under management – and their investors’ recommendations for corporate disclosure now call for publication of country-by-country reporting.

We are also participating in the work of the standards body, Global Reporting Initiative, to enhance tax transparency. Along with representatives from the big four accounting firms, two global businesses, academia, investors and labour, I’m a member of the eight-person technical committee working on a potential new standard on disclosures on tax and payments to government.

And of course, we also work with agencies across the United Nations and OECD to support technical proposals using country-by-country reporting – which is a key component of the policy platform we put together after our establishment in 2003. Prof. Richard Murphy, also on the GRI technical committee, wrote the original draft international accounting standard which formed the basis for the OECD standard adopted in 2015 – but so far only for private reporting to tax authorities. In support of the public country-by-country reporting that we’re confident is on the way, we’ve begun to develop an open database to which multinationals are invited to contribute, and where technical analysis can be taken forward. 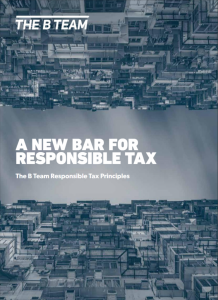 “The B Team is a not-for-profit initiative formed by a global group of business leaders to catalyse a better way of doing business, for the wellbeing of people and the planet. Founded in the belief that the private sector can, and must, redefine both its responsibilities and its own terms of success, we are developing a ‘Plan B’ – for concerted, positive action that will ensure business becomes a driving force for social, environmental and economic benefit…”

The B Team includes a number of high profile figures who have spoken out on key tax justice, financial transparency and/or human rights issues, including Gro Harlem Bruntland, Mo Ibrahim, Ngozi Okonko-Iweala, Mary Robinson and Muhammad Yunus. Included too are a range of business leaders – some from companies that have championed aspects of corporate social responsibility. Four years ago, for example, Unilever’s Paul Polman made a series of striking statements while accepting an award for development leadership, including this:

Polman: “Unilever pays tax where it does business. Every company should. Africa loses more in tax than it receives in aid. This is wrong.”

Others have an unclear commitment to tax and public services. One of the founders, Richard Branson of Virgin, said on the launch: “Business has previously been concerned with the bottom line and has not got involved in society or with the wider issues of the world. All businesses should become a force for good, and not just focus on short-term profit.” That stance is hard to square with the Virgin Group’s structure in secrecy jurisdictions, and its willingness to sue the UK’s National Health Service for taxpayers’ money.

But perhaps this is the moment for change… In keeping with their mission statement, and the broad area of work referred to above, the B Team have set out “to develop a set of Principles that offer a clear framework for responsible tax practices.” To that end, they make the broad case for the importance of tax – including as critical to achieving the UN Sustainable Development Goals. This, we love. 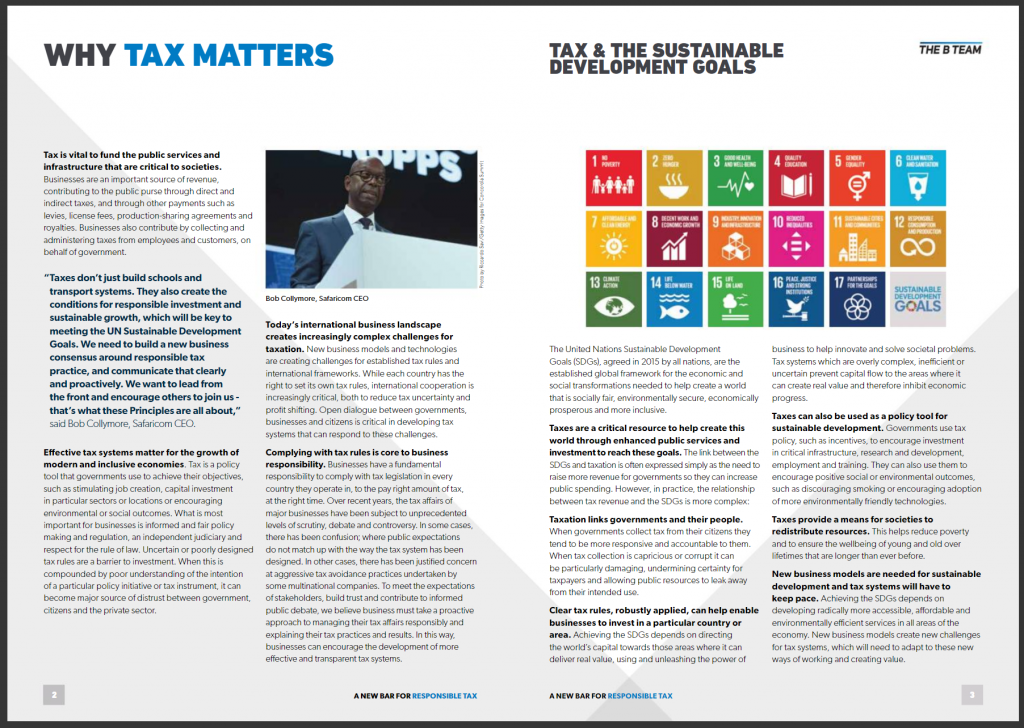 We should celebrate the progress that this embodies. It’s not so long since the dominant narrative promoted by major multinationals and their advisers was to deny that tax (paid by them, in lower-income countries) had any development benefit at all. (After all, the governments are all corrupt, they spend it on themselves, why should we pay anything?)

But the change is well established, with broad recognition of the central role of tax in supporting development and challenging inequalities. More than any rhetorical shift, what matters is whether there’s a commitment to behavioural change that will actually support demonstrably different outcomes.

The B Team report identifies seven principles, each with a range of supporting bullet points. To summarise: 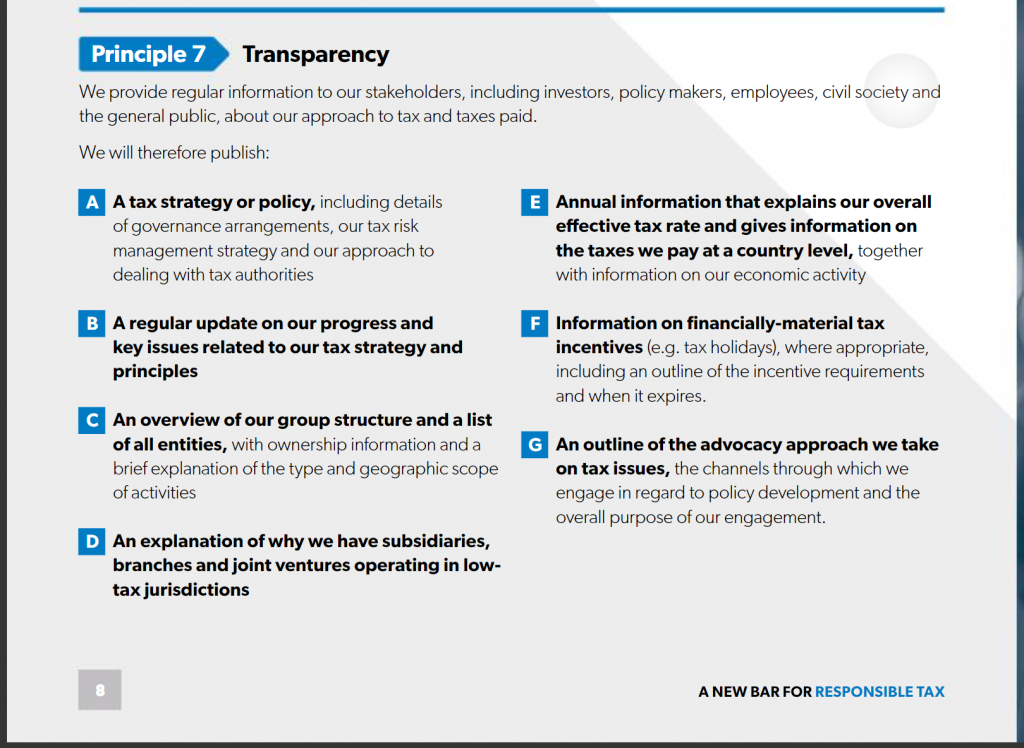 This is where it’s really disappointing. While the mood music of principles 1-6 is ok, commitments to comply with the law, or existing positions on beneficial ownership transparency, don’t exactly move the needle.

And crucially on transparency, what is immediately clear is that the B Team principle – despite making most of the right noises – stops well short of requiring any kind of consistent reporting. Principle 7E in particular sidesteps the need for any kind of comparable data, that could be used to evaluate objectively one multinational against another – to ascertain whether any or all of the other principles have actually given rise to any specific outcome in terms of tax behaviour. Or to evaluate any given multinational’s performance over time. Or the performance of multinationals in one country against their performance in another.

Compare this, for example, to the existing Fair Tax Mark criteria, or those for the tax transparency standard of the Responsible 100.

Compare to current, public reporting by extractive firms or financial firms in the EU.

In fact, why not compare it to the value of multinationals just publishing their OECD country-by-country reporting, as it stands? The compliance costs would be near zero – perhaps even below zero, since you could simply tell the world where it was (ideally at datafortaxjustice.net and not a ropey pdf on the back of your website), rather than transmitting data to one or more tax authorities or others.

The OECD standard, while not perfect, immediately allows the kind of comparison needed to judge progress. The stated principle of aligning declared profits with ‘value creation’ is a little sketchy – the agreed G20/OECD position of aligning with ‘real economic activity’ a rather clearer equivalent. And of course OECD country-by-country reporting provides the data on the location of real activity along with profits declared and tax paid – so at a stroke, you can show your broad performance.

The B Team’s members have committed themselves to worthy principles that lack any consistent transparency, and therefore any hard criteria against which to evaluate progress. Given the range of standards and proposals out there that have moved beyond this, it is – sadly – evident that the ‘new bar’ is a lower bar.

We invite the B Team to revisit this work with urgency, and to seek their members’ agreement to – at the minimum – come up to existing standards of tax transparency. We remain happy to engage on this. Ideally the B Team would join with the many engaged groups in the Open Data for Tax Justice hub, and become champions for public country-by-country reporting.